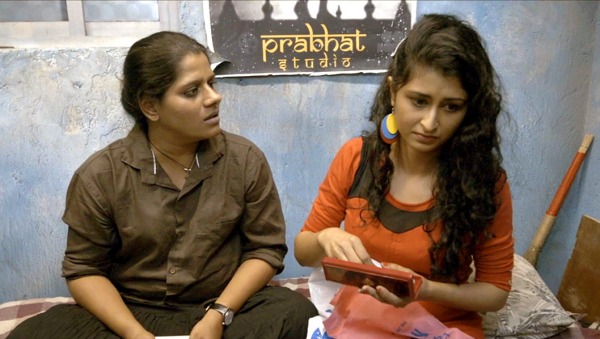 Tikli and Laxmi Bomb was the final film screened in HOME Manchester’s ‘Not Just Bollywood’ season. It was introduced by the season’s curator Omar Ahmed who added to his review of the film on his blog at Movie Mahal. Omar usefully contextualised this film, about two female Mumbai sex-workers who rebel against the control of the pimps and corrupt police, with references to the contemporary cycle of Indian films about the ‘New Woman’. Just as importantly, he also recognised that there have been films throughout Indian film history which have attempted to present the ‘New Woman’, most notably perhaps by Satyajit Ray in Mahanagar (The Big City) in 1963. Another way of looking at this is to think about the stories of courtesans in the Mughal era who have featured prominently in historical Indian dramas and whose presence has often shifted readings of the male characters in the films.

The film is an adaptation by Aditya Kripalani of his own (third) novel. It’s Kripalani’s first feature as a director and in addition he produced the film and worked with the film’s music composer, Marcus Corbett. (See the YouTube clip below for the story of the film’s crowd-funding.) I tend to agree with Omar’s comments on the film. I found it engrossing and thought-provoking throughout and the two central performances by Vibhawari Deshpande as Laxmi and Chitrangada Chakraborty as Putul/Tikli are quite stunning. The ensemble cast members are well-written, as is the action in each scene as might be expected from a filmmaker coming from a scriptwriting and literary background. I’m less sure about the flow of the overall narrative structure and the mixing together of seemingly different filming styles. It appears to be an independent film which has not quite digested the generic conventions of the mainstream that it hopes to incorporate. In addition there are a number of devices in terms of the use of songs and moments of reflection which work well on their own terms but perhaps stand out too much in the film overall. The films lasts around 150 minutes. I was never bored throughout the long running time, but there were several moments when I thought we might have reached an ending but after another fade to black the film carried on. There was no Intermission as there might have been in a mainstream film.

As I’ve tried to indicate, the narrative uses generic conventions but in a sense supersedes them by developing ’rounded’ characters for the two leads. Laxmi is a street prostitute working with a group of women on a dark roadside in Mumbai. She’s an experienced worker who ‘mentors’ the new girls and her pimp brings her Putul, a seemingly lively and smart young woman, who will stay with Laxmi, sleeping in her room until she knows the ropes. Putul soon reveals herself as no timid victim and Laxmi finds the roles in their relationship almost reversed as Putul (who gains the nickname ‘Tikli’, meaning ‘short fuse’, I think) begins to break the rules and threaten to subvert the system. We gradually learn something of the characters’ backgrounds, though little is stated directly. I noted the Prabhat Studios poster on the wall. The famous studio from the 1930s and 40s was based in Pune, where Vibhawari Deshpande was born. Laxmi is to some extent the local, whereas Chitrangada Chakraborty, as her name suggests is from Calcutta and Putul is a stranger to Bombay.

The film’s main strength is the way in which Aditya Kripalani explores the structure of the street prostitution racket. He offers us an almost ‘procedural’ presentation, taking us carefully through the process to show how the women take payment before a ‘trick’, how they have a ‘protector’ in the form of an auto-rickshaw driver, how they pay a percentage to the pimp and how the police round them up every few weeks – but drop charges because they have been paid-off by the pimp. And with power over everything (and everyone) there is a ‘super pimp’ who is aiming to be elected as a politician. Having laid all this out, Kripilani then uses Tikli and Laxmi as agitators who explain to the other women how they are being oppressed and how they could subvert the system by ‘doing it for themselves’, cutting out the men who oppress them and keeping a greater percentage of their earnings. There is a scene in a local café in which Laxmi and Tikli explain their plans and one of the older women plays the character who argues that what they are suggesting just can’t work. For a fleeting moment I was reminded of the famous scene in Ken Loach’s Land and Freedom (UK-Spain 1993) when villagers argue about land seizure during the Spanish Civil War. 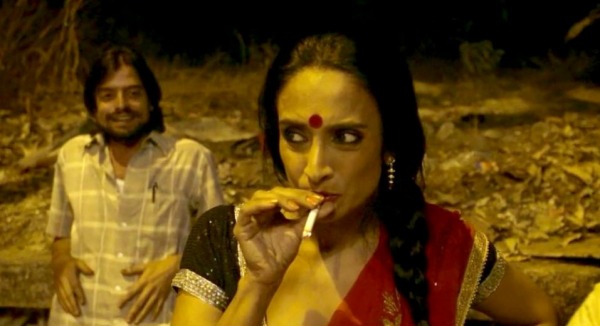 Suchitra Pillai plays Manda, the woman who warns against trying to subvert the system. She’s with Saharsh Kumar Shukla as Mangatram Pichauri, the purveyor of coffee and cigarettes to the women

The weakness of the film is that the villains, the pimps, the auto-rickshaw driver, the hired goons and corrupt police are simply generic types and this undermines both the performances of the leads and the writing of the scenes between the women. The two central characters develop so that we care for them but this in turn is lost in a genre climax with a chase scene. At the end Kripalani adds a short coda with a little twist which gives a positive note. As well as noting the filmmaking flaws, I agree with Temple Connolly in feeling that the film’s poster suggests a kind of ‘tacky sex comedy’ (see the first image of the trailer below). Tikli and Laxmi Bomb (which refers to the women as a ‘street gang’) has moments of humour but is essentially a serious film with an important argument to make. I want therefore to praise the filmmakers for broaching the subject of street prostitution and recognising the exploitation of women, but also their capacity to organise and to fight back. They demonstrate solidarity and an understanding of patriarchy and how to fight it. I understand that many of the heads of department on the crew were women and certainly the general representation of the female characters is quite different than the usual exploitation film with its ‘male gaze’. The film has been successful at various international film festivals, showing in London, Leicester, New Zealand and Berlin as well as Manchester and winning various awards. In India the film is distributed by Netflix, which alongside Amazon seems to be the saviour of certain kinds of Independent Indian films (see Rajat Kapoor’s comments during last year’s ‘Not Just Bollywood’ Q&A and screening of Ankhon Dekhi).

The trailer below opens with Putul recording a selfie video to place on Facebook, much to the bemusement of Laxmi. I wonder if Facebook would feature so prominently if this film was made now? Perhaps it has a different cultural status in India. The remainder of the long trailer gives a good idea of the mix of styles in the film. Below it the director addresses the camera in his attempt to find funding for the shoot.