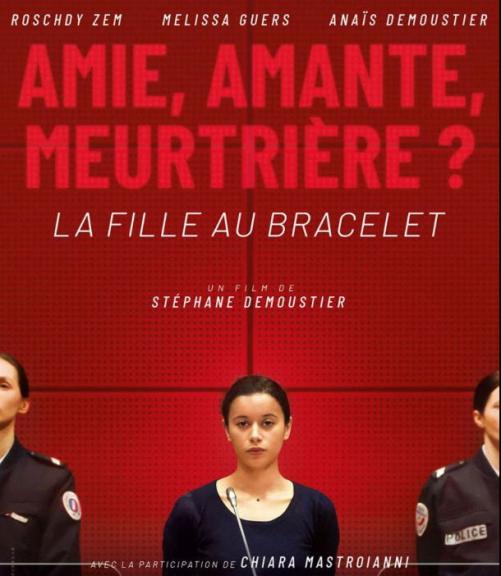 Screened on BBC4, this film confounded my expectations. I knew it was a film starring Anaïs Demoustier and that it was directed by her brother, Stéphane. I knew it was a courtroom drama and I assumed it dealt with the robbery of a bracelet. In fact, the term bracelet, is used in France to describe what in the UK would be called an ‘electronic tag’ fitted round the ankle, allowing an accused person to be living at home with restrictions on movement. The other thing I didn’t realise was that this was a re-make (I’m not sure how ‘loose’) of an Argentinian-Mexican film from 2018 titled Acusada (The Accused). The film is presented in the 1:1.66 aspect ratio which does help to create the slightly more claustrophobic feel of the courtroom.

This unusual narrative offers us a courtroom drama from an odd perspective – that of an ‘observer’ in the court. We are not placed ‘with’ the prosecution or defence case. It also allows us to identify with the father of the girl in question, Lise Bataille (Melissa Guers). Bruno Bataille (Roschdy Zem) is at times an observer in court but we also see him trying to maintain some discipline at home. It is clear that he doesn’t know Lise as well as he thought he did. Lise’s mother, Céline (Chiara Mastroianni) is absent from the court for the first part of the proceedings – she must work as both she and her husband are self-employed. With two such starry actors as the parents, it’s interesting that Anaïs Demoustier was given the role of the Prosecutor. Her performance is quite chilling and I found it unconvincing (and I’m a fan of Ms Demoustier). The French judicial procedure seems to conduct a case like this – a charge of murder – as requiring the presence of three avocats, one for the Prosecution, one for the Defence and a third representing the victim (in this case the mother of the murdered girl, Flora?). The court is presided over by a judge. Compared to an English Crown Court, the proceedings are more informal but allow examination of any witness, or the accused, by the judge and the three avocats. 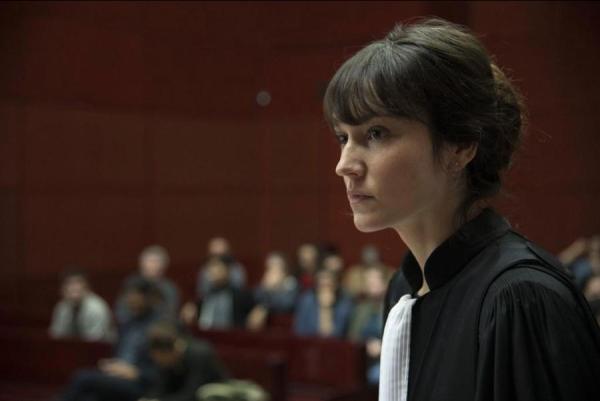 Anaïs Demoustier as the Prosecuting Counsel

The narrative takes place in the present but a prologue shows the arrest of Lise two years earlier. She has spent most of the last two years at home with her ‘bracelet’, pursuing her education by correspondence course. She was sixteen when arrested and is now eighteen. This is significant since her relationship with her parents has changed. There is no real explanation as to why it has taken two years to reach the Assize Court. I don’t wish to spoil your narrative pleasure but like one of the IMDB ‘user’ commentators, after years of watching Engrenages (Spiral), I do wonder what the investigating judge has been doing for two years and why the evidence of murder seems relatively thin.

Courtroom dramas are invariably conventional in that the audience is primed for familiar moments such as brilliant rhetoric from counsels, a witness breaking down and most dramatic, the sudden appearance of new evidence. In this case, if such conventions are employed it is with little attempt to dramatise the moment. Lise gets to give an emotional statement, but also to remain silent in response to some questions. Her counsel, an older woman, seems well-prepared and comes across well. The prosecution appears almost dismissive and intent on coming to a conclusion. The pleasures offered by the narrative are partly the pleasures of the ‘procedural drama’ – like a documentary with the tedious parts taken out. But as the case unfolds in court it seems to change towards a moral questioning of Lise’s behaviour as a 16 year-old. Flora was her close friend and classmate and together they did the usual things that teenage girls do except that, now in the era of social media, many of their actions are recorded on their phones and shared with others. Flora’s phone contains material shown in court and we get the feeling that what is shown is news to Lise’s parents.

I’m not sure what to make of the film, but I was certainly engaged by the narrative and in a different way to the usual puzzle-solving fascination of most courtroom dramas. It did seem to me a narrative that connected with contemporary concerns. The performance of Melissa Guers is remarkable for a young actor who had never worked on a film before. I’m not a parent and the Press Notes make clear that the director was motivated to some extent by his desire to explore what it means if a courtroom becomes the place where the life of your child is exposed to a wider audience in terms of behaviour of which which you have been unaware. I should note that Lise also has a younger brother (eight years younger) who is responsible for some key information. The family melodrama probably gets less time than the courtroom drama but it is equally important.

The Girl With a Bracelet is available on BBC iPlayer in the UK for two months. I think it is definitely worth watching. I think the trailers give away too much of the plot so I’ve left them out.