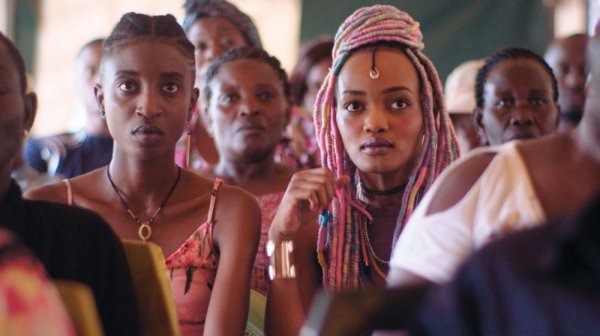 Being told you are degenerate in church

This is an effective ‘coming of age’ film from an unlikely source: Kenya. Co-written and directed by Wanuri Kahiu the film was banned in its native country because it ‘promoted lesbianism’. If anything, the film shows how difficult gay love is in a homophobic society so ‘promotion’ doesn’t exactly cover it. The discriminatory formulation harks back to Thatcher’s disgusting ‘section 28’ that, in 1988, was designed to prevent local authorities in Britain from ‘promoting homosexuality’. So disgust with Kenya for banning such a tender, and not explicit, film must be tempered, in the UK, by the acknowledgement that 30 years ago our government was promoting similarly homophobic messages. No doubt our colonial laws, homosexuality was only ‘made legal’ in 1967 in the UK, contributed to the difficulties Kenya has in acknowledging different sexualities.

Samantha Mugatsia and Sheila Munyiva are superb as the unlikely couple: Kena quiet and withdrawn; Ziki loud and flamboyant. They are daughters of local electioneering politicians which adds a social dimension to the film’s melodrama. The importance of the Christian church in Kenyan society is acknowledged and so is its homophobia. The pastor’s sermon against difference is shown to encourage the attacks Kena and Ziki suffer; Kahiu shoots a mob scene in a genuinely scary manner. The film itself is as brave as its characters.

The film also portrays patriarchal society, particularly through Kena’s dad, as problematic. He seems to be a genuinely nice guy, he owns a shop and happily gives credit to shoppers that seems to be more than part of his campaign for reelection (presumably as a local councillor). However that hasn’t stopped him abandoning his wife for a ‘younger model’.

Ziki allows Kena to fulfil her potential by giving her confidence; initially her ambition was to be a nurse. However, she is obviously bright enough for even more challenging roles in health care. The ending of the film is nicely ambivalent for no matter how much the audience (I doubt homophobes will be still watching at this point) want the couple to be together, that is not a straightforward option in contemporary Kenya.