The women of one village

This shortish documentary feature (68 mins) was screened as part of Bradford’s Refugee Week with various intros and post-screening comments from members of the local Sudanese community in the city. The screen at the Delius Arts Centre is located in front of the stained glass windows of the late 19th century German church in the city (which still holds a service once a month, I think?). Bradford received many German migrants in the late 19th century and now it receives migrants from Africa and West Asia. It’s great to live in a city that welcomes those who need to move here for whatever reason.

Beats of the Antonov is a film by the Sudanese cinematographer and now director Hajooj Kuka who was educated in Beirut and in the US and who seems now to live between several places. He returned to Sudan to make this film with the backing of South African producer Steven Markovitz, who has helped bring many African stories to the screen. There has been  plenty going on in Sudan since 2014 and the regime of Omar Hassan Ahmad al-Bashir who had held power since 1989 was finally ended in April this year after waves of protest in Sudanese cities. The situation is still highly volatile. This film is about the attempts by the al-Bashir regime to crush the resistance of the people of the Blue Nile and the Nuba Mountains of South Kordofan. The conflict is still live today. This area is now on the Southern border of Sudan since the partition of the country which created South Sudan in 2011 and there are refugees from the South in the area.

The film’s clever title refers to both the bombs dropped on villages by Antonov transport aircraft and Russian-built jet fighters and the music produced by the people on the ground as their means of solidifying their resistance and maintaining their strong community bonds. Hajooj Kuka started out thinking he was making a film about refugees and bombings but discovered a form of music and songs that he had never heard before (see the clip below). The music is produced using improvised musical instruments and many of the songs celebrate the everyday lives of the people of small communities under attack. 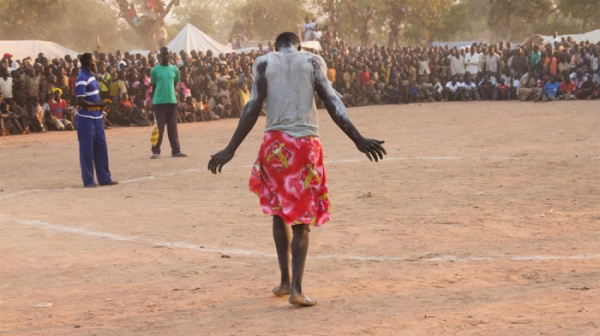 As filming progressed it became clear that the musical culture of these villages was all tied up with the fundamental question of ‘identity’ in Khartoum. Sudan is a large geographical area that contains many groups with different language cultures, different religious beliefs and a strong sense of identity. The Ottoman Empire and then the British Imperial administrations from 1899 up to Sudanese independence shifted between policies that either maintained or attempted to obliterate regional differences. Since 1956 there has been an attempt to ‘standardise’ Sudanese culture as Arabic-speaking and Islamic, something generally resisted by peoples from different backgrounds calling for recognition of their individual cultural identities. Kuka himself explains in the second clip below how he soon became aware of the importance of this in the mountains and how he started to reflect on his own identity. There are several comments in the film by local people about their ‘split’ identity between local and national ‘Sudanese’. One example that Kuka explores is the ‘girls’ music’ sung by some of the young women in the villages. The elders don’t like this music because it isn’t ‘traditional’, but neither is it like the commercial pop music played in Khartoum. The ‘girls’ compose their own lyrics about their lives sung to simple tunes. The dilemma for the local people is how to preserve one identity but not become ‘second-class citizens’ in a national sense. But in the meantime, how do they fight against the bombers? The film does include footage of the paramilitary forces of the SPLA (Sudan People’s Liberation Army).

This is a remarkable film that Hajooj Kaka made with the people of the region and which he has now taken around the world since its showing at Toronto in 2014. Not surprisingly it provoked lots of comments from the Sudanese in the audience in Bradford, including one from the area in question. The complicated political history of the country and its current issues are very important for the Sudanese people and their families in the UK. It was a privilege to be part of the audience and to very much enjoy the film – and also to realise just how much there still is to learn about British imperialist and colonialist practices in Africa and their role in the damaged future lives of ex-colonial subjects.