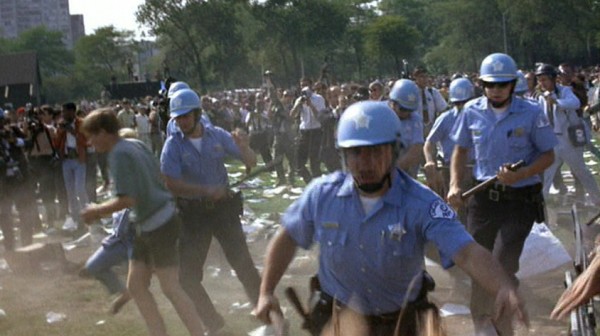 By 1969 I think I considered that my interest in cinema was more than just the enjoyment of ‘entertainment cinema’. I hadn’t yet discovered the full range of the diverse film offer in London, but I’m pretty sure I was aware of Haskell Wexler’s Medium Cool. However, I can’t remember if I actually watched it on release. I was intrigued to see it in GFF’s programme and now I feel very grateful for the opportunity to see it on the big screen.

John (Robert Forster) posing beneath a poster of Jean-Paul Belmondo

Allan Hunter gave his usual entertaining and informative introduction to this screening, suggesting that the cinematographer Wexler making his first film as a director was influenced by Jean-Luc Godard. I think that this might be a reference to Godard’s 1967 film Weekend. Certainly there is an important use of car crashes in both films, but Wexler’s film is much more structured and ‘narrativised’ in its use of different elements than most of Godard’s work from 1967 onwards. Wexler is also credited with the screenplay and the cinematography on Medium Cool. In the interview shown below, Wexler tells us that his film began as a literary adaptation of a 1967 novel by Jack Couffer titled The Concrete Wilderness. This novel traced the adventures of a freelance photographer and naturalist who meets a boy with a dog in the New York city storm drains. The two discover the wide range of animals living in the city. This storyline remains at the centre of Wexler’s film but the location moves to Chicago. When Wexler returned to his home city in 1968 there was so much going on in the streets re Civil Rights, the anti-war movement and Mayor Daley’s attempts to hijack the Democratic convention that he realised that the ‘background’ in his film had to come forward and merge with the original story. 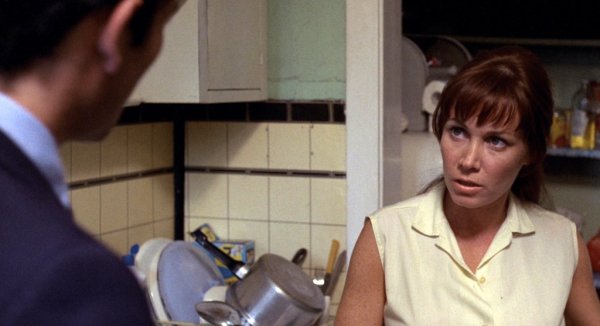 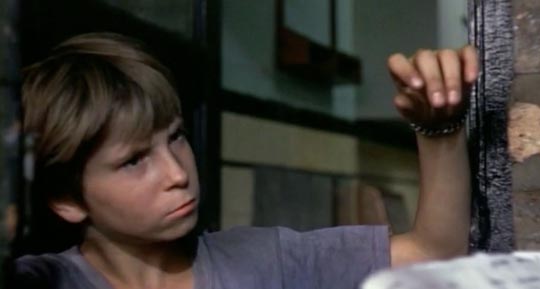 The central character becomes a TV news camera operator/reporter, ‘John’ played by Robert Forster, who with his sound recordist attempts to collect material that will represent the tumultuous events in Chicago at the time. But when John learns that the TV station regularly sends his footage to the FBI to help in identifying people he ‘wakes up’ and starts to to investigate stories as a freelance. At the same time, he changes in his personal life as well when he meets Harold, a young teenager who he thinks is stealing his hubcaps. Harold (a remarkable performance by Harold Blankenship, one of several non-professionals in the cast) lives with his mother, Eileen (Verna Bloom), who has brought her son to Chicago from West Virginia where she was a teacher in a rural school. In Chicago she works for Motorola. Harold has homing pigeons and roams the streets of Chicago with a young friend. John and Eileen are similarly on the streets looking for each other and for Harold as the clashes between police and National Guard on one side and demonstrators on the other spread across the city. 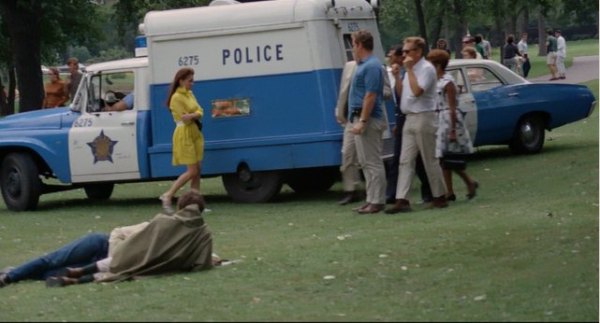 Watching the film now, the mixture of fictional story, documentary footage of the convention, Wexler’s own footage recorded as part of the real event and ‘staged’ documentary sequences doesn’t seem that unusual. Several commentators suggest Wexler is a pioneer of ‘ciné-vérité’ camerawork. They may be correct about a studio film at this point but ciné-vérité dates back to Jean Rouch in France in the early 1960s. The North American equivalent, ‘Direct Cinema’, though slightly different in approach, was already a staple of TV news documentaries in the US and also featured in Nation Film Board of Canada films. Looking back at reviews from the time does however reveal the impact of the film. Roger Ebert, for instance, thinks that the film marks the real turning point in Hollywood films and he abandons his usual approach to write more generally about how Hollywood had changed, picking out the earlier film The Graduate (1967) as the beginning of the process. Vincent Canby in the New York Times is perhaps more clear-eyed in his analysis of the film, suggesting that it is

a film of tremendous visual impact, a kind of cinematic ‘Guernica’, a picture of America in the process of exploding into fragmented bits of hostility, suspicion, fear and violence. The movie, however, is much less complex than it looks.

Canby also recognises that the film’s title is a reference to Marshall McLuhan’s work on television, though he thinks that the film’s use of colour and editing could diminish the horror of the real events being shown live on TV. (McLuhan suggested that TV was a ‘cool’ medium because it offered relatively little stimulus to the viewer and required ‘participation’ by the viewer to fully understand its meanings. This he contrasted with a ‘hot’ medium like cinema film which stimulated the visual sense above all else.) Ebert and Canby don’t however mention the film’s use of music which is distinctive and which in a way links Medium Cool to both The Graduate and Alice’s Restaurant. The music was the responsibility of Mike Bloomfield, the great Chicago guitarist who was also a relative of Wexler’s. Bloomfield use a mix of traditional protest songs and strong guitar pieces, one from Arthur Lee’s Love and a number of Frank Zappa’s early compositions for the Mothers of Invention. The other major Chicago figure who was important in the film’s production was Studs Terkel, the legendary ‘people’s historian’, actor, journalist and radio broadcaster. Wexler explains that without Terkel’s support he would not have been able to film the scenes with black militants in Chicago who were understandably reluctant to engage with white Hollywood filmmakers in 1968.

John with his sound recordist go to a police station to cover the story of an African-American man who has handed in money he has found. (Grab from dvdbeaver.com)

Wikipedia suggests that the film was profitable for Paramount, suggesting rental income of $5.5 million and an original budget of $800,000. This suggests that the studio knew what it was doing, which if true was unusual for the time. Perhaps it wouldn’t have been made at the time at any other studio. Wexler says in the interview below that he was offered the chance to make The Concrete Wilderness by Peter Bart who was then a producer at Paramount. This was also the period when Robert Evans was Head of Production and between 1967 and 1974, Paramount was a ‘hot studio’ with hits like Rosemary’s Baby (1968) and The Godfather (1972), both in their different ways groundbreaking films.

Haskell Wexler made only three more films as director and none as high-profile as Medium Cool. However, he did continue to be a highly acclaimed cinematographer. He had already won an Oscar for his work on Who’s Afraid of Virginia Wolf? (1966) and he won a second for his work on Hal Ashby’s Woody Guthrie biopic Bound for Glory (1976). Later he shot four John Sayles movies with Silver City in 2004, his last major feature. Wexler was clearly a fascinating man and died aged 93 in 2015.