Girls of the Sun was screened at Cannes this year as part of the Official Competition. It was one of only three films directed by women in the main competition in this year of #MeToo. Unfortunately, while the other two women (Alice Rohrwacher and Nadine Labaki) were both genuine contenders for the big prize with Happy as Lazzaro and Capernaum, Eva Husson’s Girls of the Sun was given something of a ‘thumbs down’ by the Cannes critics. I would like to have refuted their putdown, but I have to admit that the film has flaws (not helped by Screen 5 at the Vue suffering sound problems again).

The ‘girls’ of the title are actually women who have joined the Kurdish military in order to fight to liberate their home town which was taken by Daesh. With their husbands and fathers executed, the women and their children were kidnapped and then the young boys were taken to be trained as Daesh fighters. The women, who subsequently escaped, were then recruited for the fight. It’s a harrowing and important story which deserves to be more widely known – see this report on Kurdish women in the Peshmerga. The film was shot in Georgia and the central role is taken by Golshifteh Farahani, the Iranian actor who was so good in About Elly (Iran 2009) but who later left for France and who has subsequently appeared in international films. Farahani plays the role of Bahar, the commander of what the promo material calls a ‘batallion’ of female soldiers. In fact by the time the fighting proper begins this appears to be reduced to more like a small squad of less than ten. 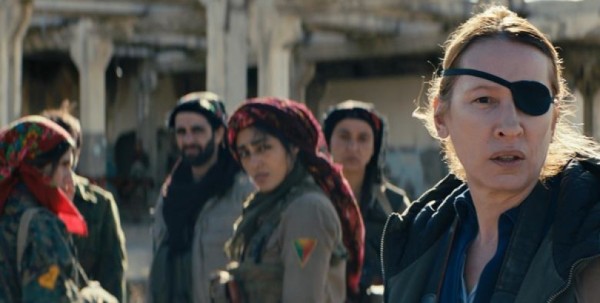 Emmanuelle Bercot (with the eyepatch) as Mathilde

Eva Husson, making only her second cinema feature as writer-director makes a number of important strategic decisions which perhaps seemed a good idea at the time but which I think perhaps didn’t quite work out as she planned. First she decided to present her story as a non-linear narrative with a series of flashbacks woven into the main narrative showing how the women were first kidnapped and how some escaped. At the end of the film we saw possibly the same explosion as at the beginning – which Keith suggested meant that everything was actually a flashback to two different time periods. He may well be correct. I confess at the beginning I was trying to cope with the loud and unfortunately distorting soundtrack comprising rather bombastic music scored by Husson’s regular collaborator, the American musician Morgan Kibby. The second choice was to include the character of a French war correspondent Mathilde played by Emmanuelle Bercot (who I last saw in Mon Roi, 2015). Bercot is a powerful figure (with six directorial credits) and in the film’s opening sequence her character seems to be the protagonist. But in time we realise that Mathilde’s role is mainly to observe/witness the story of the female fighters. Since there is a sub-genre of ‘journalist under fire’ pictures with examples from Hollywood, European and ‘international’ cinemas, I found this a little confusing – as if Eva Husson was not quite sure what to do with her character while the audience is expecting the journalist to become an active agent in the narrative. The journalist’s role seems to be partly as listener when Bahar tells the women’s story. She also enables us to see how dangerous war reporting is during this kind of close fighting.

I don’t want to give the impression that this is a ‘bad film’. Golshifteh Farahani and the other women are convincing fighters and the action scenes are exciting enough. There is a strong sense of this being the story of women literally observed by a woman and that’s fine. I just had the nagging feeling that it wasn’t working as well as it should. It’s perhaps significant that at one point (or was it soon after the film ended?) I was reminded of the Bollywood action epic earlier this year with Salman Khan and Katrina Kaif which imagined a similar scenario with women needing to be rescued from a terrorist stronghold in Iraq. Katrina Kaif’s ‘super spy’ is very impressive in taking out so many black-clad warriors with her choreographed martial arts techniques. This is a very silly film but actually quite entertaining. Girls of the Sun is very serious (rightly so) but a bit clunky by comparison. I remembered later that Agnès Poirier had written an angry piece in the Guardian during the Cannes Festival in which she calls the film exploitative and argues that is not a feminist film since the two lead characters are defined mostly by motherhood rather than by their political activity. She was defending film critics who had called out against the film from the #MeToo activists who blamed poor reviews on male film critics. She has a point but perhaps both sides of the argument need to cool down a bit. Eva Husson’s background suggests an intelligent and talented woman from a family steeped in anti-fascist action. She won’t have attempted to exploit Peshmerga women – but perhaps the script needed a bit more development?