Sylevester Stallone as Rocky Balboa and Michael B. Jordan as Adonis Creed discuss strategy and tactics in the ring!

I chose to see Creed because I wanted to see an African-American film (not always easy in the UK outside London and a few key cities). I missed Fruitvale Station (which certainly didn’t have a wide release) from director Ryan Coogler and star Michael B. Jordan. I saw the original Rocky film starring Sylvester Stallone in 1976/7 but I don’t think I’ve seen any of the sequels. Creed sees the illegitimate son of Rocky Balboa’s greatest ring competitor Apollo Creed trying to live up to his father’s name in the fight game. Creed has had a wide release in the UK, probably because of Stallone as actor, producer and co-writer – i.e. the Stallone factor gives distributors more confidence that the film will appeal beyond the Black British audience. I find this sad, but that’s the way the industry in the UK is. Even so, I was once again the only person in a 90 seat cinema. I like being on my own, but I do wonder how the cinema keeps going. Anyway, I had a great time. I’m glad I saw this in the cinema and I have to say I was surprised on several counts.

Creed has been widely discussed as a ‘reboot’ of the Rocky ‘franchise’. I’m not sure that knowing this is particularly helpful if you haven’t seen the previous films. My impression is that this is a much more sober/sensitive feature than much of Hollywood’s output while still adhering to the generic structure of the sports drama and particularly the boxing drama (boxing being one of the few American sports that has appeal outside North America). Ryan Coogler is a remarkable young director, here also responsible for the story with a co-writer’s credit for the script itself. The film is well-cast – more on that later – and brilliantly photographed by Maryse Alberti. Alberti has had a long career, much of it in TV and independent film productions. He was one of the cinematographers on the Muhammad Ali documentary When We Were Kings (1996) and on The Wrestler (2008) by Darren Aronofsky. I’m no expert on boxing but I’ve seen a few boxing films and Creed convinces me with its fight sequences. Coogler elects to use a long take and sometimes long shot style familiar from arthouse/independent cinema and his editors Claudia Castello and Michael P. Shawver both worked with him on Fruitvale Station along with production designer Hannah Beachler. I’m sure if I looked, I could find more personnel who were on both films. Creed cost around $35 million but has already grossed $161 million worldwide. This demonstrates that a film can be a global hit without resorting to a fast-cutting ‘immersive’ style. Creed is 133 minutes and some have argued that it is ‘flabby’ and could be tightened. Ash Clarke in his very good Little White Lies review uses this term and suggests that part of the Rocky Balboa personal story could be cut. I don’t think that would be a good move, but I concede that a little tightening up in some sequences could trim off a few minutes from the running time. I have to say though that for me there was no flabbiness. Aesthetically, Creed works well. The music seemed fine as well. But what of the narrative? 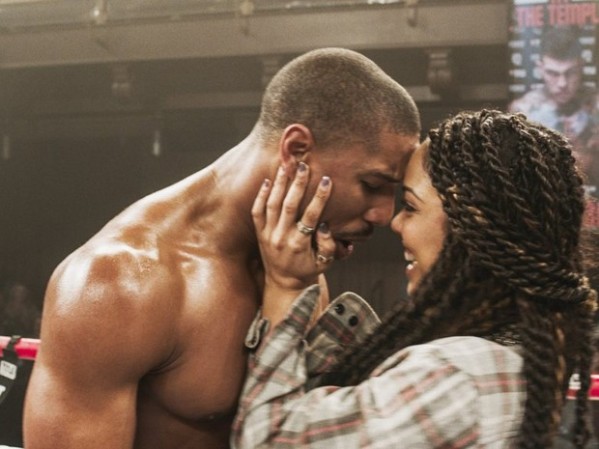 I think an important issue might be whether Creed is an ‘African-American’ film in the sense that, to take polar extremes, a Tyler Perry or a Charles Burnett film might be so described? Or is this a mainstream genre American film that just happens to have an African-American central character and director? To some extent that depends on whether there is a genuine exploration of a specifically African-American cultural milieu. And this is possibly what makes Creed different. Professional sport, alongside popular music, has long offered opportunities for young Black people to make a decent living and achieve a public profile in both the Americas and Europe. Creed offers us a young Black boxer (Michael B. Jordan), two boxing gyms in Los Angeles and Philadelphia and a relationship for young Adonis Creed with a promising Black singer played by Tessa Thompson (recently seen in UK cinemas in a lead role in Dear White People and in a smaller supporting role in Selma). The sport/music combination is sometimes seen as a restrictive/constraining factor in terms of Black culture, limiting the range of opportunities and typing Black characters in particular ways. Creed partially avoids this charge by making Adonis a character who spends time as a youth in a wealthy home and who gets a good education followed by an executive job in the finance sector. When he ditches the job to follow his dream to be a boxer and goes to Philadelphia he is therefore a ‘different’ character to the other boxers he meets. The film is also interested in Stallone’s Rocky Balboa who must be tempted out of retirement to train Adonis (‘Donnie’) and when he has the big international fight, Donnie and Rocky travel to UK to fight ‘Pretty’ Ricky Conlan in Everton’s Goodison Park football stadium. My feeling was that the script didn’t attempt to type the fight as ‘black v. white’, though I was concerned that the Liverpool boxer was being typed as a working-class ‘Scally’ figure. Again, however, I think the script handled this well in the end. The ‘real’ pro boxer Tony Bellew plays Conlan and I thought the fight was credible. I’m guessing that the inspiration for this pairing was the recent history of Ricky Hatton’s fights in the US. By all accounts it was Stallone’s interest in Everton that located the fight on Merseyside. Some location footage of the stadium on a (football) match day helped the fight sequence feel genuine (though I was disappointed not to hear the Z-Cars theme and I’m sure someone was waving a Liverpool scarf).

Michael B. Jordan is excellent as Creed and I was impressed by Stallone’s Rocky Balboa and the way the script handled the relationship between the two. Tessa Thompson was also very good and it was a shame that her role was not explored a little more. One potential narrative about her career and tensions between Adonis and a group of musicians seemed to be cut off too soon. If there is a follow-up, her role and that of Phylicia Rashad as Apollo Creed’s wife and the woman who fostered Adonis Creed after he was placed in juvenile detention could be usefully developed. Overall this film has helped restore my faith in the potential of Hollywood genre movies and I’ll certainly seek out a follow-up if it is made.