Frances McDormand as Ingrid and Brian Cox as Peter Kerrigan

With Jimmy’s Hall in UK cinemas at the moment I’m looking back and re-viewing the films Ken Loach has made about events in Ireland. Hidden Agenda is one of the two ‘odd’ films that Loach made in the 1980s (Fatherland in 1986 is the other). Hidden Agenda is odd for both institutional and aesthetic reasons – but in other ways it ‘fits’ the general trajectory of the director’s work with his various collaborators.

Ken Loach found it very difficult to get TV commissions or to raise money for films in the 1980s and this project was initially taken up by David Puttnam at Columbia in 1987. When Puttnam left Hollywood, his endorsement nevertheless enabled Loach to raise the money from Hemdale, the UK-US company founded by David Hemmings and John Daly. Hemdale already had a reputation for producing controversial films such as those from Oliver Stone (Salvador and Platoon) and a political thriller set in Northern Ireland presumably appealed to Daly as  a sound commercial business proposition. I do wonder though if he realised what kind of story he would get from Jim Allen.

Allen was in some ways Loach’s mentor in developing political ideas and he had written Days of Hope in the mid 1970s plus three of the more controversial of Loach’s TV plays, including The Big Flame (1969) about a dock strike in Liverpool. Allen was from an Irish Catholic family in Manchester and it’s interesting that the name of the central character in Hidden Agenda is Peter Kerrigan – the name of one of the regular actors (and trade union organisers) in Loach’s TV plays including The Big Flame.

The film’s narrative combines elements of two conspiracy stories of the 1970s and 1980s. The plot begins with the final press conference of an international ‘Civil Rights Monitoring Team’ which has been collecting evidence of the maltreatment of suspects held by the British security forces in Northern Ireland. One of the lawyers, an American Paul Sullivan (Brad Dourif), has been given a cassette tape by ‘Harris’ (Maurice Roeves), a mysterious figure who is clearly being watched by undercover British agents. Having listened to the tape Sullivan attempts to meet Harris again but is assassinated. Deputy Chief Constable Kerrigan (Brian Cox) flies in to investigate the murder. He meets resistance from both the RUC (Royal Ulster Constabulary) and various figures from British secret service groups. Initially at least he is prepared to push and to find out the truth with the help of Sullivan’s partner Ingrid (Frances McDormand). Kerrigan’s investigation is arguably a reference to the so-called ‘Stalker Inquiry’. John Stalker was the Deputy Chief Constable of Manchester who investigated the alleged ‘shoot to kill’ actions of the RUC in 1983, but who was then controversially removed from the case. (A 1990 TV drama, Shoot to Kill, covered the affair in some detail.) Hidden Agenda also draws upon the stories of conspiracies by right-wing British politicians and security personnel to destabilise the governments of Heath and Wilson in the 1970s in order to ensure the election of a more right-wing Tory government.

Apart from Jim Allen, only Jonathan Morris as editor and Martin Johnson as production designer were present from Loach’s usual crews. Rebecca O’Brien was a co-producer alongside Eric Fellner (who with Tim Bevan later became the main mover behind Working Title). Stewart Copeland was responsible for the score. Later he also worked on Riff-Raff and Raining Stones for Loach. Copeland had co-founded the pop band The Police with Sting but had started composing for films in the late 1980s. His was one of the more unusual collaborations with Loach. He’d attended Millfield, the public school associated with sport and his father was a senior member of the CIA. But Hidden Agenda includes a couple of Irish Republican songs featured in a Republican club and linking the film to both Days of Hope and The Wind That Shakes the Barley. Cinematographer Clive Tickner had just completed photography on the award-winning mini-series Traffik for Channel 4 and this and his documentary experience clearly recommended him. However, the production overall was invariably caught between the kind of political struggle film – the personal and collective struggles over conscience and actions delivered by Allen with the generic thrills of commercial cinema. Added to this, the production was forced to abandon Loach’s preferred ‘authentic locations and performers’ strategy. Parts of the film were shot in Belfast and its environs but the film’s insurers forced some shooting in England. Brian Cox and Maurice Roeves were well-known British actors at this point, Frances McDormand and Brad Dourif had been together in Alan Parker’s Mississippi Burning (US 1988) for which McDormand had been Oscar-nominated. Put all these elements together and the result is a production that resembles one of those Hollywood international thrillers directed by a European filmmaker. Sometimes they work in interesting ways – and sometimes they don’t.

Hidden Agenda does work as a thriller on one level. Loach, Morris and Johnson capture some of the street feel of Belfast and the action is generally well-handled. All the performances are good I think and there are several set-piece arguments between the principals that are exciting in terms of political ideas. There are also a couple of very neat devices signalling the history of Irish struggles against British colonialism. The film opens with a quote from James Fintan Lalor (1807-49): “The entire ownership of Ireland, moral and material, up to the sun and down to the centre, is vested of right by the people of Ireland”. This is soon juxtaposed with a shot of an Orange march and a quote from Margaret Thatcher (about her ‘ownership’). Later in the film, a patrician British security chief opines that Ireland would be a “lovely country if it wasn’t for the Irish”. There is also a clear link made via the McDormand/Dourif characters with Chile in 1973. “It couldn’t happen here” one of them says – but it does, in a way. These moments promise us something that the film can’t really deliver and though I was gripped throughout the narrative, I realised afterwards that the script doesn’t manage to resolve the contradiction in the mix of genre and politics. It would be good, for instance, to know more about the background of Kerrigan. What lies behind his ‘professional’ career policeman persona? At one point he suggests that he might be prepared to lose everything to expose the truth. What motivates this? 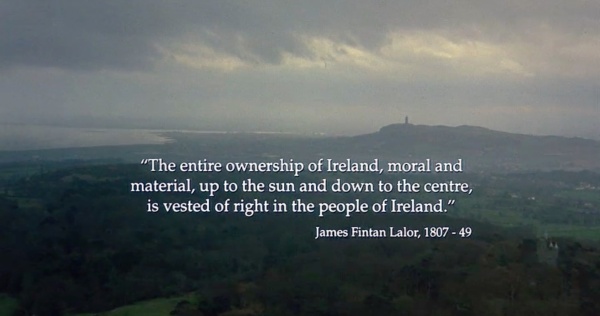 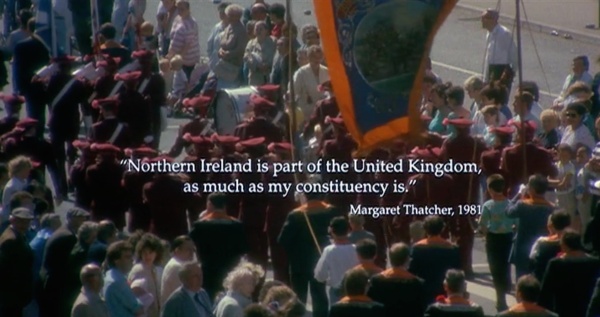 Of course, whatever the film managed to produce in terms of readings it wouldn’t matter to Loach’s right-wing critics. Alexander Walker (a Unionist) famously denounced the film at Cannes (where it won the Jury Prize) as ‘IRA Propaganda’. This is nonsense of course. Certainly the film is pro real freedom for the whole of Ireland but the focus is completely on the behaviour and the ideology of the British security forces. And there is the problem. Perhaps Walker was referring to the film he expected to see. In her review for Monthly Film Bulletin (January 1991) Verina Glaessner identifies a character played by Michelle Fairlie as a young mother whose IRA husband is in Long Kesh internment camp. This is the kind of Irish character who needs to be central in the narrative to root the political discourse in the personal lives of ordinary people. John Hill (1997), one of the best analysts of Loach’s work, offers a detailed account of his problems with Hidden Agenda. He suggests that it is the constraints of the ‘conservative genre’ of the political thriller/detective story that undermine Loach and Allen. The generic narrative constrains the possibilities of different types of engagement by audiences – i.e. they must follow the conventional ‘uncovering’ of the conspiracy – and, as we noted, the personal story is focused on the ‘maverick investigator’. (There is actually a second detective, confusingly played by John Benfield (often a police chief, e.g. in Prime Suspect) who seems to disappear from the action early on.

Hill also refers to the way in which the generic mise en scène of the police thriller clashes with Loach’s more usual naturalistic style. He suggests that Loach finds only clichéd generic images to represent the Northern Ireland setting which doesn’t allow audiences to reflect on the political issues. The film becomes an entertainment featuring a vulnerable hero – the ‘good policeman’. This ties in with Glaessner’s complaint that Loach’s overall embrace of naturalism/realism, for which he was heavily criticised by left media/film theorists in the 1970s, is not suited to ‘political filmmaking’. Hill refers to the debates around the film as Costa-Gavras style thrillers rather than Godardian, self-reflexive policiers (like Pierrot de fou?). All of these are valid points, although I would argue that the tradition of Swedish crime fiction suggests that it is possible to re-cast crime thrillers in a ‘non-Hollywood’ way in visual terms without losing the politics (see my review of Bo Widerberg’s The Man on the Roof (Sweden 1976)).

I don’t want to end on a negative note. Hidden Agenda didn’t offer the alternative view of the Irish struggle that Loach and Allen’s supporters might have wanted, but to get the film made and released in 1990 in the face of the British media’s distorted view of Ireland was a triumph in itself and Ken Loach made up for some of its failings with The Wind That Shakes the Barley in 2006. Hidden Agenda put him back in cinemas and he has not been kept out over the past 25 years. I’m looking forward to Jimmy’s Hall.

John Hill (1997) ‘Finding a form: politics and aesthetics in Fatherland, Hidden Agenda and Riff-Raff‘ in George McKnight (ed), Agent of Challenge and Defiance: The Films of Ken Loach, Flicks Books