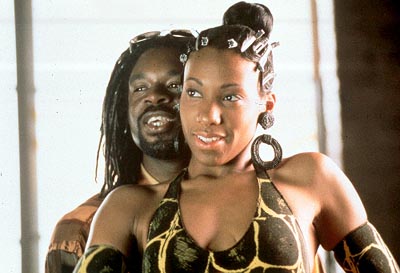 Wil Johnson as Byron and Anjela Lauren Smith as Anita

Babymother is one of the few Black British films to receive a UK release of any kind since the 1980s, but even so, it is likely to be better known abroad where it was shown in festivals. In the UK it received only a very limited distribution and has been seen mainly on Channel 4 television. The first TV airings showed cropped images from what is a widescreen (CinemaScope) film musical (which bizarrely links it to the early Cliff Richard ‘Scope musicals such as The Young Ones (1961). The film represents a conscious attempt to avoid the typical ‘burden of representation’ that sits heavily on Black British films – it isn’t concerned with the ‘problems of life in the inner city associated with racism and deprivation’. Instead it celebrates one aspect of Jamaican life in London – ‘dancehall’, with its distinctive musical style and dramatic costumes.

A Jamaican film, Dancehall Queen (made on digital video by the legendary Don Letts) was released in the UK in 1997 and did good business in South London. This may have influenced Babymother’s writer-director Julian Henriques. Some critics have also suggested that Babymother may owe something to the look and feel of Bollywood. Henriques himself speaks about the long tradition of specifically Jamaican culture including the links to the Saturday night ‘blues’ party which often carried over into Sunday church.

The film is set in Harlesden, the western part of the London Borough of Brent, arguably an area of London that has been defined through successive generations of new communities – Irish, African Caribbean and Asian. The plot sees a young single mother (the ‘babymother’) – Anita, a beautiful talented singer who has not found the confidence to assert herself in the dancehall culture, especially when she has felt herself in the shadow of the ‘babyfather’, Byron, played by Wil Johnson (now a leading UK TV actor). But when Byron steals one of her lyrics, she finally decides to take him on in the competitive arena of the dancehall. The film plays this narrative from the musical (which sees characters bursting into song as in the classical musical as well as in the dancehall) against a more familiar family melodrama about Anita’s mother and older sister. This has an interesting twist. A full synopsis and commentary is available on Screenonline. Though the Screenonline account is accurate, I don’t think it quite picks up the unique qualities of the film. Certainly this is a film to divide audiences. If you are expecting the usual ‘social realist’ drama about inner-city London, you’ll be disappointed. But if you like the idea of a vibrant musical with some reality thrown in, I think it works. If you don’t know about dancehall, it is extremely colourful with the performers wearing outlandish costumes (a bit like the carnival costumes seen at Notting Hill or other Caribbean carnival events). It is a completely Black musical, with no white characters as such. Screenonline suggests that this is a weakness, but it seems fine to me. A TV series called Babyfather appeared in 2001. There was no direct connection between the film and the series which both focus on the concept of single parents, but Wil Johnson also appeared in the first episode of the TV series. 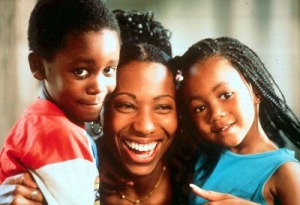 Anita and the children

Julian Henriques was born in Yorkshire. He studied psychology at Bristol University and worked as a lecturer, policy researcher, and journalist before becoming a television researcher. In the 1970s, he started the journal Ideology and Consciousness (later I and C) with a group of young psychologists and social theorists. Their aim was to bring together critical work in psychology with work on the subject and subjectivity coming out of European social theory (structuralism, post-structuralism and psychoanalysis), as well as continental feminism. He has made documentaries for LWT, the BBC and with his own production company for Channel Four. We the Ragamuffin (1992) was his first narrative short film, Babymother his first feature film. Henriques taught film and television at the University of the West Indies, Mona, Jamaica, and currently works at Goldsmiths College, University of London. Here is his staff page at Goldsmiths.

Producer Parminder Vir began her career in 1978 as an Arts Administrator with the Minority Arts Advisory Service, moving to the Commonwealth Institute and eventually becoming Head of the Race Equality Unit in the Arts and Recreation Department of the GLC. In 1986, she moved into film-making and began working as a researcher for the BBC. She set up her own production company in 1994 and produced several award-winning programmes. In 1996 she had joined Carlton Television as a Consultant to the Director of Programmes, implementing a strategy for achieving cultural diversity on and behind the screen. Since 1998 she has become a leading figure in the film and television industries, serving as a UK Film Council Board Member from 1999-2005 and setting up Ingenious World Cinema to aid production of films from “emerging markets, including India, China, South Africa, Brazil, Argentina and the Diaspora” as part of the larger Ingenious Media. (She is also married to Julian Henriques.)

Amazon shows that there are still some copies of the Film Four DVD available.

(Notes updated from a screening in 2002)