The original version of this story was a short story, “Broncho Billy and the Baby”,  which appeared in The Saturday Evening Post in 1910 and was the basis for an Essanay short film of the same name. The short story  is credited as the basis for Kyne’s later novel ‘The Three Godfathers’ in 1913; an online version is dated 1916 and would seem no longer than the original story. Set in Arizona, the basic plot has a gang of bank robbers stumble on a covered wagon where a dying woman entrusts her baby to their care; thus they become the ‘godfathers’ of the title.

” The Youngest Bad Man had just been the recipient of a serious thought. He hastened to get it off his mind. Boylike he interrupted and rose to a question of information.

“What’s a godfather, Bill? What job does he hold down?”

“You’re an awful ignorant young man, Bob,” replied The Wounded Bad Man reproachfully. “You been raised out in the woods somewheres? A godfather, Bob, is a sort of reserve parent. When a kid is baptized there’s a godfather an’ a godmother present, an’ for an’ on behalf o’ the kid they promise the preacher, just the same as the kid would if he could only talk, to renounce the devil with all his works an’ pomps——”

“What’s his works and pumps?” demanded The Youngest Bad Man.”

The drama then follows as the men battle the Colorado Desert and a lack of water to carry the baby to safety. Their destination is the mining town of New Jerusalem. One item the men carry is a bible, found in the wagon. The story is full of religious symbolism from the New Testament and the passion sequences. A burro stands in for the donkey of Palm Sunday and there are several references to the ‘good thief’ of the crucifixion.

The novel has proved a popular source for film adaptations;

Ice Age, 2002, where a mammoth, a  tiger and sloth rescue a child; but neither the novel nor the earlier films are credited.

Tokyo Godfathers, a 2003 Japanese animated film loosely based on the novel.

Roy has reviewed a digital version of the 1948 title. I had the pleasure of viewing the 1929 version on 35mm at Le Giornate del Cinema Muto in 1994. This was my second visit to the Festival, then still presented in the old 1930s Verdi Theatre. The film appeared in both silent and Movietone sound versions. We viewed the silent version in a 35mm print with English title cards from the George Eastman House. The film had some inspired additions to the novel. Neil Brand provided the piano accompaniment. The climax of the film had additional music in one of the finest cinema experiences that I have enjoyed. In this film version the surviving  Bob [Charles Bickford] staggers into New Jerusalem, carrying the baby; it is Christmas Morning rather than the night of Christmas Eve in the original story. He  collapses in front of the town’s people gathered in the wooden framed church. This sequence was accompanied by a burst from a choir out of the darkness singing ‘Silent Night’.  In the darkness they had gathered in the two small musician’s balconies either side of the proscenium. There was not a dry eye in the theatre. Unfortunately the old Verdi is no more. However Universal Pictures together with The Film Foundation is producing a restoration of the film.

The film notes in the Catalogue comments:

“Poignant camerawork and naive yet effective  symbolism shouldn’t make you overlook the director’s early evidence of Jansenist obsession with falling from grace and the struggle for forgiveness.”

As Roy notes, this is based on a comment  by Andre Bazin and Bert Cardullo. Jansenism  rose in the C17th and 18th; it was condemned as heretical by the Roman Catholic Church. The perceived error was an emphasis on ‘justification by faith alone’ rather than the  embracing of God’s grace through free well. In ‘The Three Godfathers’ the reader senses that the three bad men are forced, by their encounter with mother and baby, to reveal an innate goodness that overcomes their evil ways. One could see a similar personal development in Wyler’s later masterpiece, The Best Years of their Lives (1946). But the scriptwriters presumably were also responsible in translating the themes of the novel to  film.  Tom Reed and C. Gardner Sullivan were both experienced dramatists for popular film including work for the western genre. 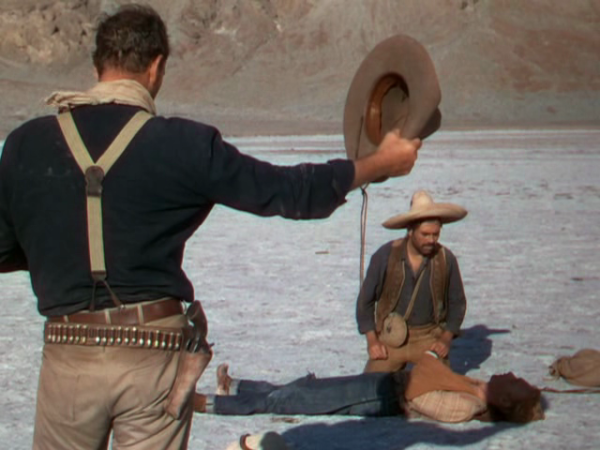 Wayne and Pedro Amendáriz with Harry Carey Jr. in the 1948 version

The 1948 version, directed by John Ford, is not of the same calibre. However, Roy rightly praises the Technicolor cinematography of Winston C Hoch. The screenplays, by Laurence Stallings and Frank S. Nugent, credits the Kyne novel. However, there are quite few changes from that and they also differ from those in the Wyler version. In particular the ending completely lacks the drama and tragic overtones of the 1929 version. This is partly down to the writing but also to the way that the Wayne persona differs from that of the young Bickford. And whilst the music presents Ford’s particular favourite melodies and songs it does not offer the impact of the live choir of 1994.