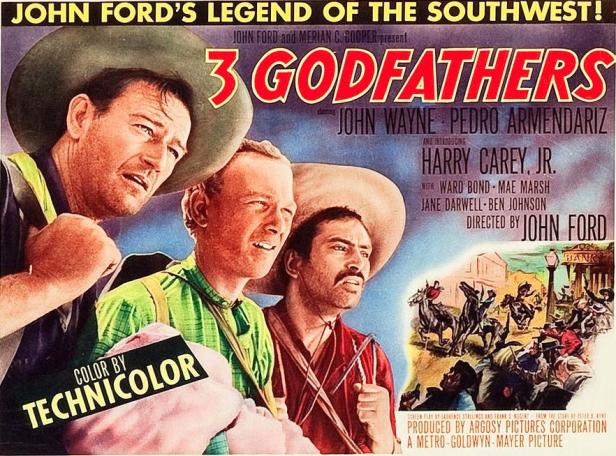 This film is both like and unlike other John Ford Westerns. Many of the Ford stock company are present in the cast and crew and the film is dedicated to ‘The Memory of Harry Carey, Bright Star of the early western Sky’. Carey had starred in the first two adaptations of the story by Peter B. Kyne in 1916 and 1919. Ford directed the 1919 film. Carey became one of Ford’s closest friends and an important actor and mentor on Westerns. He died in 1947. Ford then invited his son, Harry Carey Jr. to appear in Three Godfathers and he would go on to become a regular member of the company. The same story was used also in 1921 (Ford again), 1929 (William Wyler) and 1936. Ford’s status in 1948 meant that Argosy Pictures was able to arrange distribution via MGM with a substantial budget including Technicolor. The photography was by Winston C Hoch, who would go on to win an Academy Award for his Technicolor cinematography on She Wore a Yellow Ribbon the next year. I have to say that I think Three Godfathers is even more beautiful in its use of colour than the later film – though it might simply be a down to the better quality DVD from Warner Video. The title by the way was originally 3 Godfathers in North America but I’ve always known it by its UK title. In Quebec it was known as Les fils du désert – I wonder what the Laurel and Hardy film was known as in France?

If you don’t know the story, it must be quite something to be adapted six times you might think. It is actually very simple as a kind of Christian fable, a take on the Christmas story. John Wayne, Pedro Armendiráz and Harry Carey Jr. are a trio of, presumably not very proficient, bank-robbers. After a raid on the bank in Welcome, Arizona they are chased by a posse led by the local sheriff Perley Sweet (Ward Bond) and end up stranded in the desert without water. Here they find a woman in a covered wagon about to give birth. Her husband has disappeared and I won’t spoil any more of the story. You can work out the plot by simply referring to the film’s title. I first saw the film in the early 1970s and I couldn’t remember anything except the sand dunes, John Wayne and the baby.

This was one of Ford’s favourite films and there are a number of stories associated with it, several emanating from Harry Carey Jr. who was interviewed by Lindsay Anderson in 1978 and later wrote his own memoir. Carey’s father and Ford eventually fell out or perhaps simply couldn’t cope with each other on set, although Carey Sr. appeared for Ford again in The Prisoner of Shark Island (1936). Each thought the other didn’t want to work with them. Ford arranged for a stunt rider to pose on Carey’s own horse for the dedication shot. He told Olive Carey that he would use Harry Carey Jr. on 3 Godfathers on the day that Harry Snr. died. Harry Jr. had already worked in small roles in a couple of films but Ford gave him an ‘Introducing Harry Carey Jr.’ credit. He also persuaded him to sing in the film. Harry Carey Jr. reveals that Ford actually treated him quite harshly on set, but taught him very well in terms of what was required. Harry Carey Jr.’s other story concerns Pedro Armendiráz. It appears that Ford always chose costume items for characters in Westerns. Armendiráz, who was a very popular and celebrated actor in Mexico, had already appeared for Ford in The Fugitive and Fort Apache and he turned up for the shoot in a tailored outfit fit for Mexico’s leading actor. Ford told him the outfit was completely unsuitable and chose one himself. Armendiráz had made a fatal error and after this film he never worked for Ford again. Ford was in charge and took all the decisions. You didn’t try to make your own. The stock company understood this and were rewarded with future parts. As well as Carey, Wayne and Bond, Ben Johnson was on this shoot in a minor role, Mildred Natwick was the woman having the baby and Mae Marsh was Ward Bond’s wife. Jane Darwell, Hank Worden and Jack Pennick also had small roles. This was definitely a stock company picture. Winton C. Hoch was new to the company and he quickly learned not to make too many suggestions to Ford.

The use of the stock company almost exclusively in this film, coupled with the absence of Ford’s usual interest in exploring myth and the history of the West in his films of this period, means that audiences only have two choices. One is to dive into the sentimentalism and religious celebration of the Christmas story and the other is to look for meanings in the relationships of the familiar Ford actors and characters. I can usually cope with Ford’s sentimentalism but on this film I did find it too much in the last section. I’m happy to simply enjoy the playing and the cinematography. The players are generally very good. Some like Mae Marsh and Mildred Natwick seemed to me to be eccentric or deliberately provocative casting decisions and Jane Darwell is definitely ‘excessive’ as a man-hungry woman looking after a remote railway halt. To add to the melodrama (a comedy melodrama of redemption?), Ford uses songs both diegetically and as part of the score. Richard Hageman’s score uses ‘The Streets of Laredo’ as a motif in the opening titles and Harry Carey Jr.’s rendition of ‘Gather at the River’ (one of Ford’s favourite hymns) is matched in the closing sequence with a choral version of ‘Bringing in the Sheaves’ by the women of the town (a more joyous crowd than the women of the town driving out Claire Trevor in Stagecoach). The whole town then gives a second rendition of ‘Gather at the River’ to close the film. Three Godfathers was a hit with audiences even if some critics didn’t like it.