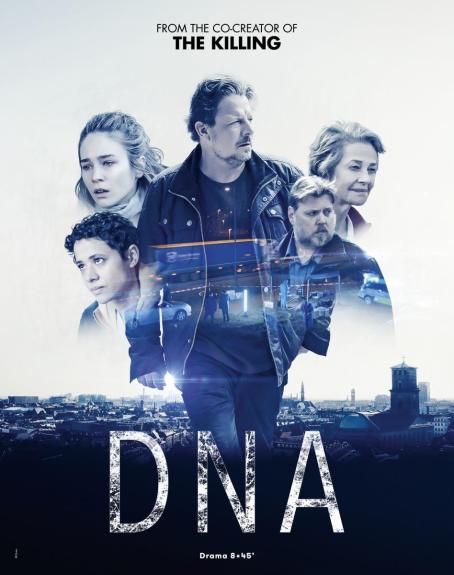 DNA is in its third week out of four on BBC4 in the UK. The 8 x 40 minute episodes of this long-form crime fiction narrative are broadcast in pairs on Saturdays at 21.00 and Tues/Weds (at 00.00). Six episodes are currently on iPlayer in the UK. The serial appears to be a co-production between Nordisk/Danish TV2 and arte France/Warner Bros. International TV in Denmark. The story is set initially in Denmark and moves to both Poland and France. Promoted as ‘from the co-creator of The Killing‘ it boasts an international cast that includes Anders W. Berthelsen and Nicolas Bro, both familiar from Danish films and TV, alongside Charlotte Rampling as a French police investigator and Zofia Wichlacz (a lead in the recent BBC serial World on Fire) as a young Polish woman.

Outline of Episode 1 (no major Spoilers)

The narrative begins in Copenhagen 2014 when Rolf Larsen (Berthelsen), a Danish police officer, finds himself in a difficult position while investigating the kidnap of a child called Minna. His wife has left him in charge of their baby daughter and when a lead comes up he decides to take the baby with him on a ferry to Poland as part of the investigation. Sea-sick on the ferry he is forced to leave the baby on deck for a moment (his partner, the DNA specialist Skaubo (Bro) is finishing his meal in the lounge) and when he returns she has disappeared, never to be found. It is assumed that the baby, securely in its pram, was washed overboard. Rolf’s marriage breaks up and he is transferred to North Jutland when the kidnap case is closed without a result. Then in 2019 another case brings him back to Copenhagen along with a young police officer from Jutland, Neel (Olivia Joof Lewerissa). Rolf discovers that there is a fault in the DNA database and some records have not been uploaded. When some DNA data is re-entered into the system, the European police data-sharing system links the Danish kidnap case 5 years ago to a recent murder in France and Ms Rampling appears in Copenhagen. Meanwhile in Poland, a young woman discovers she is pregnant. Poland has strict anti-abortion laws and things start to go wrong. Poland, Denmark and France are somehow linked in what might be a form of international infant trafficking.

I confess that I found the first couple of episodes of this serial difficult to engage with. That is probably my fault but it doesn’t matter because Episodes 3, 4 and 5 ‘ramped up’ the excitement (new pandemic vocabulary!) and I’m now hooked. The first point to note is that this is standard Nordic crime fiction with conventions that have now became the norm in many other territories. The plot involves important social issues. Minna, the child at the centre of the original kidnap case is the daughter of an Iranian asylum seeker father and a Danish mother. The suggestion is that the Danish police are too quick to assume that the Iranian father has abducted his own child. The young woman in Poland is up against a system which criminalises abortion in a way that isn’t acceptable in most (all?) other EU member states. France too seemingly has some restrictions in family law that I don’t think exist in Scandinavia. Second, we often discover in Nordic crime fiction that an investigating officer finds himself or herself engaged in an investigation which in some way has an impact on a personal family melodrama. That’s true for Rolf. He still loves his wife. She is currently seeing someone else but is still friendly towards her ex. I like Anders Berthelsen and his pairing here with the dynamic Neel works well I think. The presence of senior female police officers and female detectives is now a norm in Scandinavian crime fiction, as it should be. Things are different in Poland. I note that there isn’t a Polish co-production input. On the other hand Rolf is told that the whole case is an embarrassment to the Danish police (because of the DNA database mess) and I think there is a discourse questioning national typing rumbling below the surface of the whole narrative. The credits reveal that the unit which presumably supervised the Polish narrative actually comprises Czech personnel and the footage was not shot in Poland.

I am intrigued by the casting of Charlotte Rampling. She is a fine actor and the play between her character and Rolf is gripping. I don’t think it is ageist to suggest that she is several years older than seems plausible, so why was she cast? The serial extends the familiar pattern of Nordic investigators speaking English when they have to confer with colleagues in Estonia or Poland etc. and in this case it becomes a three-way English discourse. Rampling is fluent in French and English but I’m sure there are plenty of other French actors who could have been selected. (I’m fantasising how my hero Caroline Proust, aka Captain Laure Berthaud of Spiral/Engrenages would handle things in Copenhagen.) This leaves me with the feeling that perhaps Warner Bros TV or arte wanted a star name that would work in North America and the UK?

Co-productions make a lot of sense in both the TV and film industries in terms of distribution and funding deals. They also cause quite a few problems. Three things are worth considering in this case. First, there has been severe criticism by some Danish viewers about the dialogue and its delivery by the actors. Since I can only read the subtitles I can’t comment on this. Perhaps the subtitler has rescued the dialogue for anglophone viewers? The director of the first four episodes, removed his name from the credits citing the classic ‘creative differences’ – make of that what you will. Finally, some Polish viewers are angry, both about the Czech locations standing in for real Polish towns and about the depiction of a Polish convent hospital and the Catholic church in Poland generally. All these comments are on IMDb. I should add that I am also slightly confused by the time switches in the narrative. The opening episode signals a flashback ‘Three Days Earlier’, but in later episodes, the Polish scenes which are often presented conventionally as a parallel narrative, seem to me to be possibly happening earlier than the Danish scenes. I think I may need to rewatch these episodes. Below is a brief teaser trailer (in Danish) if you haven’t watched the serial yet and are intrigued. I’m looking forward to the final  episodes and I hope to return to DNA in a few weeks for some more considered thoughts.