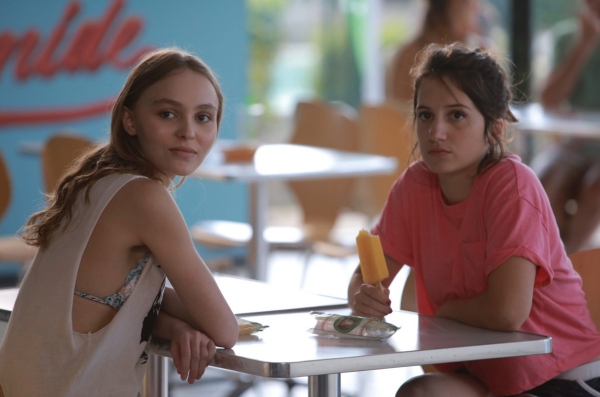 The online festival, ‘My French Film Festival’, is on offer again via Unifrance and various streaming platforms. You can sign up on this website. There are 12 features plus 19 short films on offer over a period of 28 days. In some territories the films are free to watch but in the UK I’m paying £7.14 for the features (the shorts are free). My first film is an 83 minute mystery film deemed suitable for any audience, though that is a French classification. It would probably be 12A in the UK. 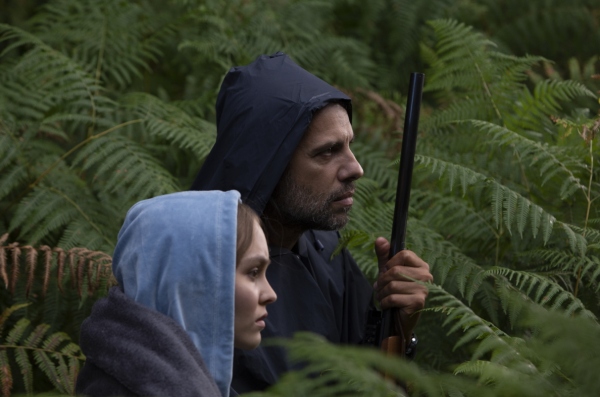 Les fauves begins with teenagers ‘making out’ in cars in a clearing when the sounds of a predatory animal growling are heard. The cars are all started up and they drive away. After the credits we find ourselves on a campsite somewhere by a river in the Dordogne. Laura and her cousin Anne are staking out a cabin on the campsite. When the family leave the cabin, the cousins break in and steal some cash which they spend in the camp’s café while flirting with two guys. Later we learn that there is a ‘rural myth’ that the campsite is threatened by a ‘big cat’, possibly a leopard, that the previous summer killed a man. These kinds of myths are quite common in the UK and I guess are likely to be even more familiar in France, a much bigger land mass with more remote regions. As a reviewer has pointed out there are also a couple of ‘big cat’ horror stories associated with the producer Val Lewton at RKO in the early 1940s. Cat People (1942) starring the French actor Simone Simon and The Leopard Man (1943) are actually quite different films but they both use the idea of a big cat prowling around people. Given the interest of French cinephilia in this kind of Hollywood ‘B’ picture material, it is possible that they have inspired a film like this. (But when I checked the Press Pack, the director’s comments revealed that he only thought of Cat People later on when he was shooting the film – and then he mentioned the Paul Schrader film.

The police officer (Camille Cottin). Note the scar beneath her eye.

Laura is a typical curious teenager. She determines to find out what is creating the fear in the campsite. Laura is played by Lily-Rose Depp, the daughter of Vanessa Paradis and Johnny Depp and as might be expected she is an attractive young woman when she smiles – but she spends much of her time with a sullen teenage scowl. Director Vincent Mariette and his co-writer Marie Amachoukeli-Barsacq make Laura the central character by involving her in up to five separate ‘investigations’, four of which are directly concerned with the possibility of a predator in the forest. These will implicate her in the mystery of a young man who goes missing after Laura was the last person to see him one night. A female police officer questions Laura about her relationship with the young man and Laura’s cousin is still in touch with the young man’s friend. Laura also stalks a man on the site who she recognises as writer ‘Paul Baltimore’ and who might himself be investigating the possibility of a predator in the woods. She gets closer to Paul and she also engages with another young man, a worker at the site who takes his rifle to the woods, hoping to find and kill the ‘beast’. Finally someone is stealing Laura’s underwear. It’s probably Anne’s brother.

Paul and Laura explore the caves where the beast may be hiding. This is a region where pre-historic cave paintings like those at Lascaux show animal images

The film is a mere 83 minutes long and it could work as a ‘B’ picture – if cinemas still programmed double bills. But it needs more coherence as a narrative. It’s not a bad idea for a story but the script seems undeveloped and the narrative just seems to fizzle out. I’m assuming that the intention is to explore Laura’s ‘self-discovery’ and one of her investigations seems to make more of an emotional impact on her than the others. The director confirms this but he suggests a great deal of psychological motivation that didn’t make much sense to me – he also namedrops several other references that didn’t add much to my understanding of what he was trying to achieve. There is a tradition of films like this, arguably going back to Cat People and with a more modern cycle associated with Ginger Snaps (Canada 2000). But Les fauves (which I translate as ‘Wild Beasts’) doesn’t come close to the excitement of either of these earlier films. The cast features two established actors, Laurent Lafitte and Camille Cottin. I’m not sure what they expected from the script but they seem wasted on this material. I suspect that the film would have been more enjoyable if the setting had been used for a teen genre picture that followed a more conventional narrative.

This wasn’t a great start to my festival viewing in 2020 but I suspect that things will get better soon! Here’s the French trailer: