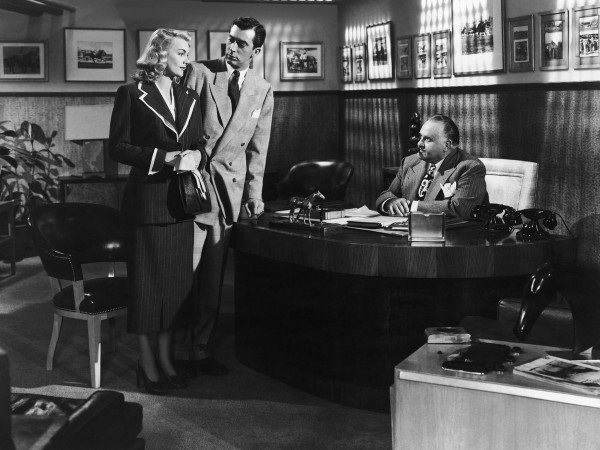 Chiaroscuro lighting in a melo-noir

After yesterday‘s peculiar mixing of styles I immediately stumbled across another example with this melo-noir. The reasons for the strange combination are easy to trace through the scriptwriters: Sam Fuller’s noir script, good guy brought down by bad woman (who is really good), was rewritten by Helen Deutsch of National Velvet (1944) fame. In its widest sense most films are melodrama as they require a contrived narrative and character types to function as mainstream texts but in this context the melodrama refers to the way, as Slant magazine has it, Deutsch ‘lobotomised’ the noir intentions.

Whilst the enigma of Patricia Knight’s femme fatale is interesting – is she as bad as she appears? – the schmaltzy home environment of the schmuck (Cornel Wilde), complete with ‘cute’ kid brother and smiling blind mother, suffocates the nihilism that John Baragrey’s bad guy struggles to sell (the ending is terrible).

Douglas Sirk’s expressionist visual style, that is celebrated in the melodramas that were to follow in the ’50s, is directly wedded to noir‘s visual style, if not the narrative. As can be seen in the publicity photo above, chiaroscuro lighting is present but my overall impression when watching the film was it is not one that relishes the noir visual style. Knight’s femme fatale, however, could be the cousin of Gilda who did go wrong. Sirk seems most interested in the interiors of the home, the key setting for melodrama.

Cornel Wilde has the thankless task of the parole officer who is unbelievably ‘good’. One thing noir movies reeked of was sex but Wilde’s far to anodyne here (not blaming him specifically – could be the script). It’s as if the Production Code had been swallowed when noir movies tended to push it as far as they could.

Apparently Sirk was so disillusioned with Hollywood after making the film he  returned to Europe. Fortunately he came back to make some of the greatest Hollywood films of the era.