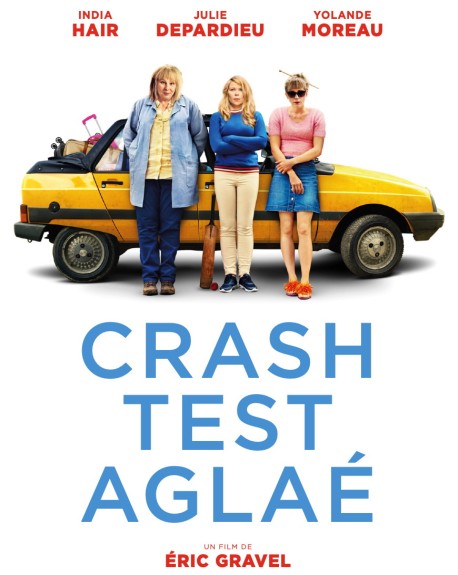 My French Film Festival is back for a special lockdown outing and this time the films are free, having been on offer in previous outings of MyFFF. This was a great start for me, an 85 minute ‘comedy-drama’ with plenty of fresh ideas mixed in with familiar conventions and a central character well worth following on her adventures. The film is the début feature of French-Canadian director Éric Gravel who has made several short films and contributions to other features.

The title refers in a literal and possibly metaphorical way to Aglaé (India Hair) a young woman who suffered a dislocated childhood with her striptease artiste mother and absent father. She has found a job as a meticulous technician in a car crash test laboratory where she obsessively prepares the dummies. But the company has decided to move the entire factory ‘offshore’ and she finds herself with the prospect of redundancy unless she agrees to transfer to India. Aglaé decides to accept the challenge to the amazement of the company and, for different reasons, her two colleagues at the plant, Liette (Julie Dépardieu) and Marcelle (Yolande Moreau), agree to go with her. The company won’t pay the airfare so they set off in Marcelle’s battered old car. What follows is a familiar ‘road movie’ on a strange travel route that will take Aglaé through Switzerland, Germany, Poland Ukraine and Kazakhstan. Marcelle and Liette don’t have Aglaé’s fortitude and they bail out when they discover better possible futures. Aglaé will continue almost to the point of oblivion. Will she make it to India and if she does, what will she find there?

The narrative draws on a variety of genre repertoires and the resulting hybrid is both interesting and entertaining.The road movie provides the structure and the opportunities for ‘adventures’ and vignettes of characters Aglaé meets on her journey. There is a background narrative that relates to questions about globalisation and ‘offshoring’ and draws upon the strong repertoire of ‘industrial action’ stories. The three women who start the journey together have all got personal reasons for leaving for India, though one of them does have a direct link to the action by the plant’s union in fighting the management. Is this a comedy as well? Yes it certainly has comic moments. These grow out of the situations the trio find themselves in and the fact that they are each interestingly eccentric. In the latter part of the narrative Aglaé does face genuine hardship and at this point I did fear what might happen. It’s not too much of a spoiler to report that she does make it to Kolkata, but not without some pain and scares. Comedies are supposed to have happy endings (i.e. to distinguish them from tragedies) but the ending for this film still has some surprises.

What made the film for me was the writer-director’s imagination and the performances of the three women and especially India Hair. I realised that I had seen all three actors before but all in smaller roles. India Hair was born in France to English and American parents. She speaks standard English as well as French and this is necessary when she is travelling and when she gets to India. At the start of the film she looks ‘plain’ and at the end of her journey despite the various things that happen to her she looks very attractive and it genuinely feels that she has ‘come out of herself’. Oh and I forgot to mention she’s a cricketer! That bat is handy and she’ll certainly enjoy India.

The film is free to view and it makes a good diversion for those under lockdown (lots of fast car driving if you like that sort of thing). Here’s the trailer – you can turn the subs on for English. The film opens with a short scene and a voiceover statement by Aglaé. I immediately forgot this and didn’t realise what it meant until the final scenes. Structurally this makes much of the film a narrated flashback. Éric Gravel is a director I’ll look out for in future.