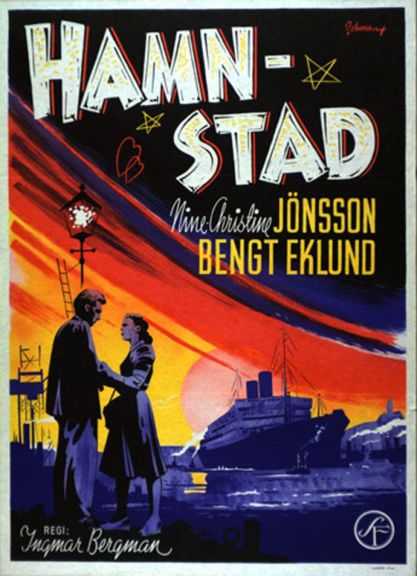 This early Ingmar Bergman film is one of a group of titles that form part of MUBI’s long-running season on ‘The Inner Demons of Ingmar Bergman’. Port of Call has now left the UK MUBI stream but there are two more currently on stream. I prefer the early to the late Bergman so I am intrigued by these titles. As well as the director learning his craft, these films offer us a sense of Swedish cinema in the context of a global industry in the late 1940s. The focus is more on genre and less on Bergman as a distinctive ‘authorial voice’.

The ‘port of call’ is not, I think, named (I’m remembering my viewing from a few weeks back) but it was shot in Göteborg. The film title translates simply as ‘port city’. The narrative begins with the arrival of a ship in port and at around the same time a young woman leaps from the dock into the sea. She is rescued and later she will meet a sailor from the ship at a local dance. He is Gösta (Bengt Eklund) and she is Berit (Nine-Christine Jönsson). This is a familiar social melodrama or perhaps what in the UK in the 1950s and 1960s might have been called a ‘social problem picture’. Berit is a young woman at odds with her conservative mother after her father decided to spend as much time as possible at sea. She rebels by spending her time at dancehalls and ‘going with’ a variety of men. Eventually she falls foul of the Swedish police and welfare services because of her behaviour and she is sent to reform school. She is eventually released and found a job in a factory – but she must live with her mother again. Jumping into the harbour seems like a way out to her. But will meeting Gösta mean things take a turn for the better?

Gunnar Fischer on location in the docks

In this and the next few films we see Bergman moving between noirish studio sets and shooting on the streets in a style akin to the neo-realism which was becoming widely-known at the time with the release of Italian films around the world. The whole port area is shown through Gunnar Fischer’s wonderful cinematography. Gösta decides not to return to sea but to join the dock labour gangs. These seem to operate much as the British dock-workers of the period and Fischer shows us the hiring room and the quayside work as well as the factory floor where Berit works on a lathe. The factory scenes are reminiscent of British war-time propaganda films such as Millions Like Us (1943), though Berit is much less enthusiastic about the work and she complains about the damage to her fingers.

The girls in the Reform School

Inevitably, Berit’s mother will find out about her daughter’s new relationship and this will invoke emotional scenes within the household, but these will ultimately be less important perhaps than Berit’s chance encounter with a girl she first met in Reform School. The script, which Bergman developed from a story by Olle Länsberg, seems much more sociologically structured than in Bergman’s later films. Länsberg was a writer local to Göteborg and young, being born in 1922. I can’t find any corroboration of the suggestion that Port of Call was actually a novel before it became a film, but it is certainly the case that the film is longer than the other Bergman films of the period at around 100 minutes – suggesting a literary source perhaps. There is a form of triangular structure in the narrative in that both Berit and Gösta have belonged to groups, he to the male group of sailors and then dock-workers and she to the young women of the reformatory. The long-term relationship that the young people want (Gösta is not yet 30, Berit is 17/18) is to some extent threatened by their past in these groups. They must also cope with Berit’s mother and her desire for a strong family unit bolstered by her Lutheran values (and her own broken relationship with her absent husband). In one scene Bertil is all dressed up, waiting to go out with Gösta (who has accepted some overtime at the docks) and reading a magazine story which the subtitles translate as ‘The Road to Happiness’. Berit’s mother arrives home, guesses what is happening and taunts her daughter. As the scene develops it becomes a classic melodrama with mirror scenes of mother and daughter in different frames and ultimately turns into a flashback in which Berit remembers her childhood and the violent rows between her parents. Eventually she goes out, runs into Gösta by chance and the evening is saved.

The narrative enigma is whether Berit and Gösta, who are clearly attracted to each other, can make it together when the society around them and in Berit’s case her past history, conspire to push them apart. The latter part of the film sees Berit involved in helping a friend who must seek an illegal abortion. This narrative device of the unwanted pregnancy occurs in another of these early Bergmans, many of which feature young women struggling against the constraints of a conservative society. The involvement of the police (abortion is illegal) and the probation/welfare services are for me the pointers towards a UK-style ‘problem picture’. In 1948 a similar British picture might be one of the ‘sensationalist’ melodramas such as The Goodtime Girl with Jean Kent as the young tearaway. The ‘problem’ is more the underworld crime milieu that the character is drawn to rather than her moral behaviour. The welfare services and the concept of ‘juvenile delinquency’ come more to the fore in the 1950s British films. This Swedish film seems both more ‘realist’ and more humanist than both British and American films of the period. Perhaps the realism of the sexual relationships is why it took several years for these early Bergman films to reach the UK. Port of Call was first released in the UK in 1959 as an ‘X’ film.

Berit and Gösta trying to work out their relationship

The narrative resolution works in two ways and I won’t spoil the outcome except to say that in one sense things come together and in another the future is uncertain but promising. I enjoyed Port of Call more than most other Bergman films partly because social realist melodramas are among my favourite genres. It’s also good to see Bergman’s (and Fischer’s) talent applied to working-class stories. Most of the reviews of the film seem to focus on looking for signs of Bergman’s authorial ‘vision’. I think I’ve taken the opposite tack and looked for the film’s generic roots. Apart from the cinematography and the direction I feel I should also commend the performances of the two leads. The only weakness I could find in the film is the way in which flashbacks are used. These are all about Berit – we learn little about Gösta’s back story. The flashbacks themselves are fine but they seem to be awkwardly introduced. At least, I sometimes found them difficult to sort out in terms of a linear plotline. In the clip below, we see the moment when Gösta first sees Berit at a dance.

The early Bergman films are included in Criterion’s Eclipse series of DVDs. Some are also available on streaming services.