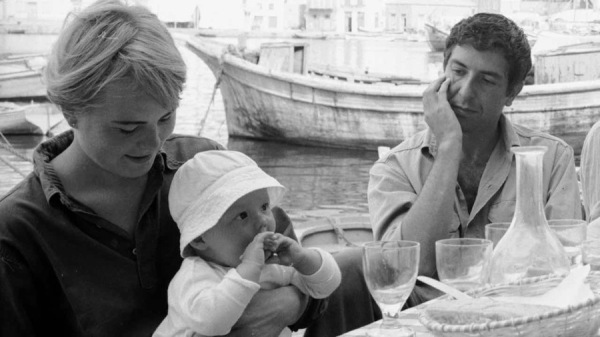 Marianne Ihlen and Leonard Cohen on Hydra with baby Axel

This is a ‘Nick Broomfield film’ – an auteurist announcement by a documentarist who appears in his own films and adopts, using Stella Bruzzi’s term, a ‘performative mode’ of documentary presentation. This rang alarm bells when I contemplated watching Marianne & Leonard, but I have watched two of Broomfield’s fiction features, Ghosts (UK 2006) and Battle for Haditha (2007), both of which are worth watching. Since I tend to insert myself into my blog posts, I can’t really complain about Broomfield. In any case he limits himself to three or four appearances only in this film.

If you don’t already know the story, SPOILERS beware!, the Canadian poet and tyro novelist Leonard Cohen met Marianne Ihlen, a young Norwegian mother with a small son from her first marriage, on the Greek island of Hydra in the early 1960s. The two lived together for a time in an expat community of writers, artists and musicians who all indulged in ‘free love’, retsina and various drugs of choice. Broomfield himself, aged 18, met Marianne and stayed with her while Leonard was away. Marianne was Cohen’s ‘muse’ and for several years they lived together for a few months at a time. In between times on Hydra, Leonard Cohen pursued his new career as a musician and rock star poet and slept with many women, having two children with one. Eventually Marianne lost hope that she could live with Leonard and they parted. Forty-odd years later, Marianne lay dying and Leonard sent her a letter of love, telling her he would join her soon. He died in 2016, three months after Marianne.

Marianne archive photo (on a visit to the UK?)

Broomfield has three main sources of material from which to fashion a documentary narrative. Leonard Cohen was a high profile, if poorly paid, poet in Canada from the late 1950s onwards and there is considerable TV and archive film material available. Once he became successful as a musician, coverage expanded considerably. Many of the friends on Hydra had super 8 cameras and, with still photographs, Broomfield could construct a visual narrative about both the Hydra community and aspects of Marianne’s life (some of this material he provided himself). ‘Witness’ interviews with various people close to both Leonard and Marianne comprise the third major source. The quality of archive footage varies considerably but some of the early stuff has survived well. It is skilfully edited by Marc Hoeferlin and presented in something close to 16:9. I didn’t really notice the cropping and nothing was ‘squashed’ or ‘squeezed’ that I could see (but the image below looks a bit dodgy). The narrative flows partly because of voiceovers taken from archive recordings of both Leonard and Marianne (who speaks in both English and Norwegian) and others remembering the period.

The problem for Broomfield is that the narrative promised by the title would make roughly a 45 minute film based on the material available. This documentary runs for over 100 minutes and the extra time is taken up largely with an exploration of Leonard Cohen’s career and a discussion of what he was doing, even when notionally still with Marianne. This has been one of the criticisms of the film with accusations that Marianne’s voice is overwhelmed by the material featuring Leonard. There is also a suggestion that Marianne’s memory has been exploited by Broomfield and that scenes at the end of the film featuring a very sick Marianne are intrusive. It is also likely that audiences wanting to know more about Cohen’s music and poetry may feel frustrated that the coverage of both is in a sense quite shallow.

Leonard as a young man in Montreal

I find it difficult to distance myself from my own emotional response to the archive footage. As a teenager I discovered the poetry and novels of Cohen and a few years later in the early 1970s I was a fan of the early albums – in the face of derision by many of my friends. I then lost touch with what Cohen was doing in the eighties and nineties before ‘re-discovering’ him in the last ten years of his life, partly through the use of his songs in films. There are several biographies of Cohen and I can recommend the one by Sylvie Simmons, I’m Your Man, The Life of Leonard Cohen (Vintage 2012). After the screening I looked for archive material on YouTube. I recommend the excellent National Film Board of Canada documentary Ladies and Gentlemen . . . Mr. Leonard Cohen (directed by Donald Brittain & Don Owen, 1965). If you check it out on the NFB’s YouTube channel, you can also find other fascinating Cohen material via YouTube’s algorithm. In fact you’ll soon realise that much of the footage in Marianne & Leonard is actually included in a range of other documentary films. The ‘extras’ in Broomfield’s film are some of the ‘home movie’ material, Broomfield’s own material and the interviews. Some of these are very entertaining, particularly Aviva Layton who was married to Irving Layton, the leading Canadian poet who was Leonard’s early mentor. Aviva deserves a film of her own.

Leonard Cohen was an extraordinary figure and the film certainly triggered all my responses to his genius and spirituality. But as Aviva says, he was both alluring to women and a terrible partner, but which great artist, writer or creative person isn’t both hugely attractive and seemingly hopeless about relationships? Marianne, as she comes across in the film, was a young woman who loved Leonard but felt out of place among the artistic community. She was damaged by her first abusive marriage and so was her son ‘little Axel’. The film also reveals other aspects of Marianne’s life which don’t show Leonard in a good light. Eventually Marianne returned to Norway and a job and a new and happy marriage. I was very emotionally engaged with the narrative, but whether that was because of the relationship between Marianne and Leonard or because of my own memories of Cohen’s songs I can’t say. I’ve seen several reviews of Broomfield’s film which seem most interested in criticising the 1960s culture on Hydra (which was certainly problematic for many of the expat artists) and denigrating Leonard Cohen because he slept with so many women and took so many drugs. For a more measured, but still negative, critical response, this Indiewire review is worth looking at. I can see all these criticisms but they don’t make me any less disposed to Leonard Cohen’s art.

If you are a Leonard Cohen fan, you will enjoy seeing the film on a big screen and it is still playing around the UK. You can find screenings through the official website. Since the BBC is a co-producer, it will no doubt appear on BBC4 at some point as well as on DVD.