Fans of ‘reel’ films gathered in Rochester New York State for the George Eastman Museum fifth Nitrate Picture Show. It is a trek, though the train journey is very scenic. And where else can you see a whole programme of the format on which film emerged, as used by Thomas Edison and the Lumière Brothers. The Museum is well appointed. The Dryden auditorium is well designed, comfortable and the sight lines are good. The staff and volunteers are friendly and knowledgeable. And the projection team are expert in a set of skills that, sadly, are becoming rare.

The programme has now settled into a standard order. It is revealed on Friday morning. You have to be prepared to take the films on trust. And one title, the last, is [rather coyly] hidden as a ‘Blind Date’ with a tantalising single frame to set you guessing over the intervening two days.

Friday afternoon commences with talks by experienced archivists on nitrate; ‘Keepers of the Flame’. This year enjoyed David Russell from the Imperial War Museum and Elaine Burroughs who worked at the British Film Institute and also for FIAF. This offers the opportunity to learn more about nitrate, archiving, preservation and the occasional hazards of the work.

The first set of titles are the shorts, including documentaries, newsreels or travelogues and animation.

Two of the latter offered particular pleasures, both in Technicolor, a system whose vibrant colours have an extra sheen in nitrate.

Tulips Shall Grow was war-time animation, (USA 1942), from the hand of George Pals. The print and the Technicolor were in fine condition in a Library of Congress print. The plot involves a young Dutch couple who suffer when the ‘army of Screwballs’ invade. But ‘Mother Nature’ provides a catalyst for resistance and victory over the invaders.

The Cobweb Hotel (USA 1936) was a delightful animation with a far more sardonic tone from David Fleischer provided by the UCLA Film and Television Archive. Flies, including a honeymoon couple, battle to escape the malevolent designs of a spider.

The early evening programme was Luis Buñuel’s L’Age d’Or (1930). The screening was from a George Eastman print which they acquired from the legendary Henri Langlois and it was in reasonable condition. This is an undoubted classic and a fine example of surrealist film. It is longer and more complex than Un Chien Andalu (1929), partly because it has both title cards and recorded dialogue, plus recorded music and effects. Sex, violence, satire, subversion and sardonic humour engage one for just over an hour. I especially like the giraffe flying out a window, the cow on the bed, and a familiar figure with hitherto suppressed biography.

The evening ended with The Beautiful Blonde From Bashful Bend (1949). This was the last major title directed by Preston Sturges in Hollywood. The print from the Museum of Modern Art was in good shape and the Technicolor format offered bold and vivid colours. The ‘Blonde’ (Betty Grable) is a western ‘sure shot’ whose main problem is her unfaithful boyfriend Blackie (Caesar Romero). The action tends to slapstick but is done with real panache. The climatic sequence is a lengthy gun battle full of witty visuals.

Saturday morning opened with the 1947 Nightmare Alley. This was a print from the UCLA Film and Television Archive. It was a pleasure to watch. Generally seen as a film noir the film lacks the flashbacks and confessional mode of the genre. And the femme fatale in this story is an overweening ambition embodied in fake spiritualist Stanton ‘Stan’ (Tyrone Power). The film was directed by Edmund Goulding, a Hollywood talent who deserves greater recognition. This film also has fine black and white cinematography by Lee Garmes.

The afternoon started with a short film by Arne Sucksdorff from the Swedish Film Institute / Svenska Film Institute, Strandhugg (1950). The print was in excellent shape and Sucksdorff’s films offer fine black and white cinematography; here with poetic sequences of the seaside.

The feature in this session came from the National Audiovisual Institute of Finland; People of the Summer Night (Ihmiset suviyössä, 1948) was directed by Valentin Vaala. Set over one night in a small rural community we watch various relationships and actions among local people; these include birth, death, and conflicts fuelled by alcohol. There also seems to be a implicit gay character. The cinematography by Eino Heino is excellent. The film offers a ‘warm-hearted and sensitive’ evocation of the ordinary but compressed for dramatic purposes. 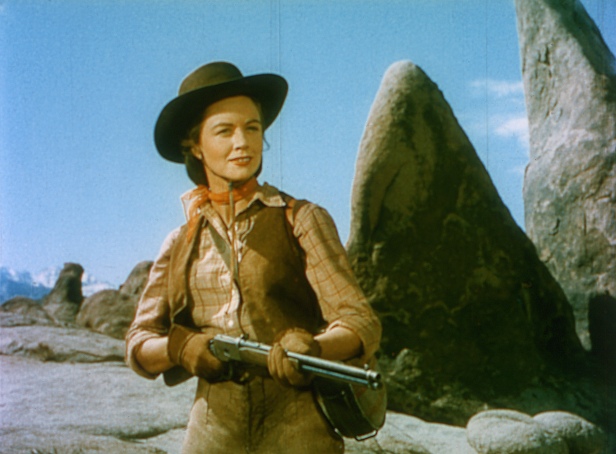 Late afternoon offered a Cinecolor western, The Nevadan (1950). Cinecolor was a two colour subtraction system, cheaper and quicker to process than Technicolor. Not that many features were filmed in the process which offered especially vibrant orange, red, blue and green. The film has a typical Randolph Scott hero. Upright and stalwart, he outmanoeuvres and outguns the villains led by George Macready. And there is the young Dorothy Malone, not just a romantic interest, but involved in the action. The print from the Austrian Film Museum had quite a lot of scratches and noticeable splices but the colour was excellent.

Rebecca (1940) was a George Eastman print in pretty good condition. There is some fine cinematography by George Barnes and a great score by Franz Waxman. I find that the first part of the film is really good as we encounter [through the eyes and ears of the unnamed heroine) the dead titular character. But once the past is revealed I think the film becomes less interesting and dynamic. The screening included a set of screen tests with Joan Fontaine, Nova Pilbeam and Anne Baxter. This demonstrated how apt was the casting of John Fontaine.

The Sunday opened with a classic film noir, Dead Reckoning (1947). This was a Library of Congress print with signs of wear, both on the emulsion and on the sound track. However, it still showed off the qualities of this black and white film. The movie has all the characteristics of a noir thriller; the confessional mode, flashbacks, the world of chaos into which the hero falls, night and chiaroscuro and a femme fatale. But I did not find it had a strong noir feel. This is mainly because the fatale, ‘Dusty’ (Lizabeth Scott] seems more like the scheming female of private eye films such as The Maltese Falcon. And Humphrey Bogart’s ‘Rip’ is in the mould of the same private eye. 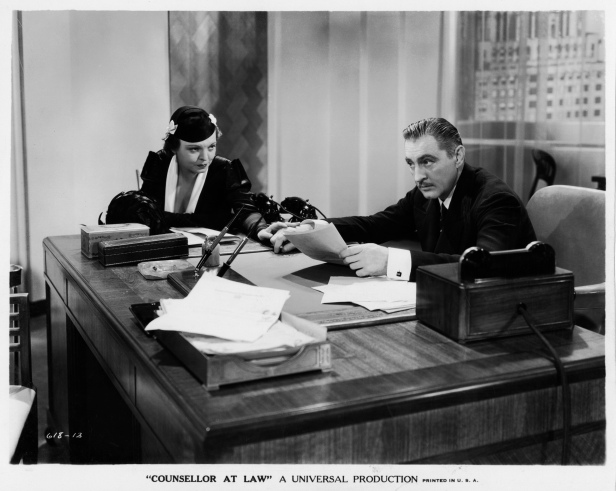 The afternoon offered a John Barrymore film, Counsellor at Law (1933), finely directed in an adaptation from Elmer Rice’s play by William Wyler. The print was from the UCLA Film and Television Archives in very good condition. The early sound track apparently needed adjustment from time to time by the projectionists. Barrymore is excellent as a shyster Lawyer George Simon, originally from the Jewish Lower East Side of Manhattan. The film [and play] follow his Machiavellian manoeuvres when a past case returns to haunt him. The pace and the dialogue are crisp and sharp; Isabel Jewell as telephonist Bessie is a delight. And there is one memorable scene when Simon agrees to defend the son of an old Jewish neighbour, Harry Becker (Vincent Sherman). Harry is a communist and in a terrific sequence turns on Simon who he denounces as a class traitor. Even though this is pre-code Harry later dies from injuries sustained from the New York police.

Then to Blind Date. This year the title was worth a wait, Gone to Earth (1950). The clue was a shot of the wedding cake after Hazel’s (Jennifer Jones) marriage to the Reverend Edward Marston (Cyril Cusack). In the adaptation of a novel by Mary Webb Hazel, is caught between the religious but liberal Edward and the sexy but brutal Squire ‘Jack’ (David Farrar). Rather than a triangle this is a square, including Foxy, a young vixen [unfortunate not credited]. Jennifer Jones is miscast as this wild country spirit but she gives her performance real panache. Cusack is grave and convincing and Farrar probably had the female audience swooning with desire. The print was from the George Eastman Museum, a donation by the Selznick family. Fortunately it was the British print not the shorter US version titled The Wild Heart. The directors were those idiosyncratic romantics, Michael Powell and Emeric Pressburger.

So this was a rewarding weekend filled full of cinematic pleasures. The organisers and volunteers got a deserved ovation at one point. And, in a habit that is distinctive to George Eastman, the audience were also invited to applaud the projectionists who work overtime to presents these old and often delicate prints.

Punters who would like to see a whole programme of the original cinema format should note that next year the Picture Show Weekend is later, June 4th to 7th 2020. We were advised that Yuri Tsivian is on a mission for the Museum scouring European Archives for Nitrate Prints. Perhaps Dziga Vertov, Max Ophuls or Jean Renoir?