Films about airliners in peril are a staple of commercial cinema, but few of them are adapted from a novel by a qualified aeronautical engineer who also happens to be one of the most accomplished story-tellers of the mid-20th century. Nevil Shute wrote many novels and three of them became ‘major motion pictures’. No Highway is the first, followed by A Town Like Alice (US 1955) and On the Beach (US 1959). I’ve always admired Shute as a storyteller even if he was an anti-socialist Brit who eventually emigrated to Australia. In many other ways he was a staunch liberal and very strong on exposing racism. No Highway the novel came out in 1948 and the film in 1951 appeared just as the post-war British aviation industry was a world leader in both military and civil aircraft but also when worries about the safety of new aircraft were very much in people’s minds. The first jetliner, the Comet, flew as a prototype in 1949 and entered service in 1952. Major accidents were a feature of its operational life, especially in 1954. In 1952 David Lean’s film The Sound Barrier focused on the risks taken by test pilots in pushing prototypes to fly faster. No Highway was so close to the ‘cutting edge’ that some reviewers considered it as almost a documentary drama. The Reindeer aircraft depicted in the film is an unusual design with two sets of tail fins. The special effects photography and model work works well to convey to convey how a new aircraft might look.

The tail section of the Reindeer undergoing stress testing in Honey’s lab (screengrab by dvdbeaver.com)

Theodore Honey (James Stewart) is an American mathematician and scientist employed by the Royal Aircraft Establishment (RAE) at Farnborough where he is exploring a hypothesis about fatigue in new metal-bodied aircraft. In particular he is working on a new turboprop airliner the Reindeer, recently put into service with a transatlantic airline. Honey is convinced that after 1,420 hours of service, the whole tail section of the aircraft will break away. His new boss (Jack Hawkins) agrees to send him to Labrador to investigate the crash site of the first Reindeer in service, the accident assumed to be an example of pilot error. When Honey flies out on a Reindeer he discovers to his dismay that the aircraft has already flown 1400 hours. What can he do to prevent a disaster? On the flight he befriends the senior steward Marjorie (Glynis Johns) and Monica Teasdale a Hollywood star played by Marlene Dietrich. Both women become concerned about Honey, a man they quickly recognise is very much wrapped up in his own world and who lacks the emotional intelligence to deal with the situation he finds himself in. It has already been revealed that Honey is a widower and that his very bright 12 year-old daughter Elspeth (Janette Scott) acts as his housekeeper and companion and is perhaps missing out on her childhood. When Honey’s concerns are transmitted to the aircraft’s pilot, how will he react and what will the airline bosses and the RAE do? 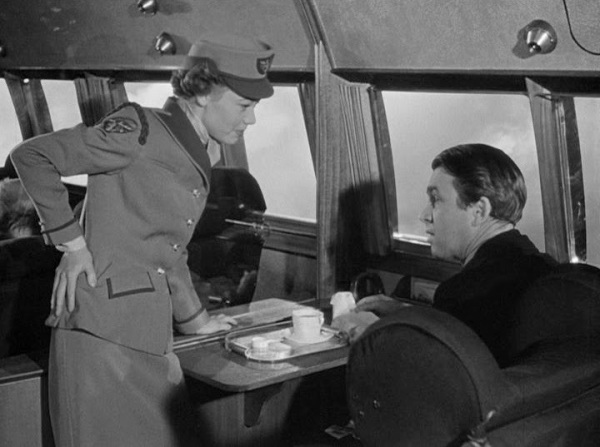 No Highway (a.k.a. No Highway in the Sky in North America) is an example of Hollywood production in the UK, something very common now and equally so at various times over the last nearly 100 years. Twentieth Century Fox made several films in the UK around the late 1940s/early 1950s. MGM operated a studio in Borehamwood. Disney was active in the early 1950s. No Highway was made at Denham, the studio built by Korda and by 1950 part of the Rank empire. Henry Koster was a German exile in Hollywood and had worked with James Stewart on his previous film Harvey (US 1950). This pair with Marlene Dietrich make up the Hollywood contingent, everything else about the film is British and especially the remainder of the cast which is full of character actors and at least two stars of the future –Kenneth More as the co-pilot of the aircraft and Janette Scott (daughter of Thora Hird) as Elspeth.

The scriptwriters Oscar Millard and Alec Coppel were British and Australian respectively and both had experience of British and American productions. I note that the script misses out the religious/spiritual elements of Shute’s work but that was probably inevitable in this kind of film. The result is that the narrative develops a well-balanced triple focus which connects three worlds – Honey’s work in his laboratory at RAE, the drama aboard the aircraft and the domestic world of Elspeth. There is also a parallel developed between the possible fragility of the aircraft and that of Theodore Honey himself. It’s interesting that the two women on the flight respond to Honey’s mixture of earnest practicality and scientific rationalism – but also to the stories about his lost wife and his daughter at home.

It’s heartening to see that IMDb’s ‘Users’ comments recognise the film’s qualities, although many of the American comments fail to comprehend the complex relationship between the UK government, the private airline and the RAE. As I’ve tried to indicate, those relationships and the fourth element, the aircraft manufacturing companies themselves, were essential for the rapid development of aircraft design in the UK in the period 1945-50. It’s unfortunately rare now to see engineering narratives taken so seriously in mainstream cinema and so carefully interwoven with human emotional stories. As some of those ‘User comments’ suggest, it’s a shame there weren’t more film adaptations of Nevil Shute’s work.

Thanks as usual to Talking Pictures TV.