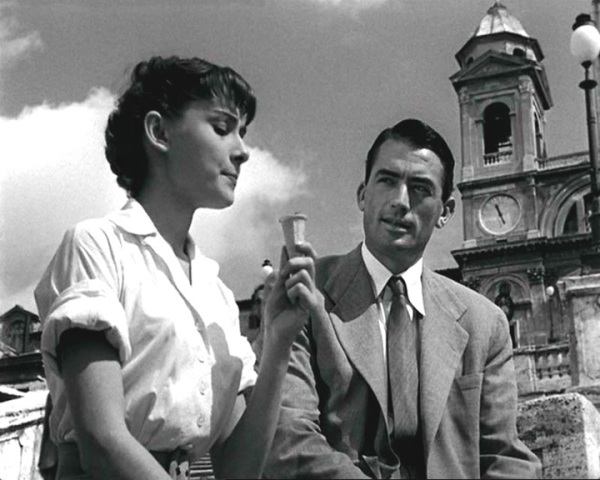 Last year I enjoyed watching some of  Audrey Hepburn’s early films collected in a DVD box-set. The only drawback was that Roman Holiday was not included. Now I’ve finally managed to see it I realise that it is an important production in relation to the concept of global film – as well as an extremely entertaining film.

Audrey Hepburn’s first Hollywood film (for which she won an Academy Award) was directed by the legendary William Wyler shooting wholly in Rome. The story by Dalton Trumbo (working incognito as he was blacklisted at the time by HUAC as one of the Hollywood Ten) is very simple. Princess Ann (Hepburn) is a young royal from an unnamed European country visiting Rome on a European tour. Bored by her engagements and desperate to experience the nightlife of Rome she ‘escapes’ from her Embassy but only after she has been given a strong sedative. Falling asleep on a city pavement she is rescued by an American journalist (Gregory Peck) who takes her to his apartment. When he realises who she is, the journalist plots to make some money from an exclusive interview but the Princess is unaware of his plans and simply wants to have fun in Rome. They have a day of adventures – but what will be the outcome? Around the time that the film was released in the US in September 1953, Princess Margaret (younger sister of the recently crowned Elizabeth II in the UK) was in the news when her affair with Group Captain Peter Townsend became the focus for public discussion. How much Trumbo drew on this ‘real’ story, I don’t know, but it probably helped sell the film.

The major studios began to produce films in the UK very early and Paramount had a studio in London in the early 1920s. In the 1930s various small studios in the UK made ‘quota quickies’ on behalf of the Hollywood majors. There were also working relationships between the Hollywood majors and mainland European producers in the same period but it wasn’t until the Americans arrived in Rome in 1953 and founded ‘Hollywood on the Tiber‘ that the modern concept of ‘Global Hollywood’ began to take shape. When William Wyler set up the production of Roman Holiday he was able to use the resources of Cinecitta – then one of the best studios in Europe – and also to shoot in local palaces and on the streets of Rome. In some of the extras on the DVD a Paramount executive claims this was the first film to be shot on location in Rome in this way and even the film writer/scholar Molly Haskell (who should know better) claims that the shoot pre-dates and predicts the Nouvelle Vague. Of course it does, the films of Roberto Rossellini and Vittorio de Sica amongst others had been made in this way since 1944 and indeed Ingrid Bergman had left Hollywood and begged for a part in a Rossellini film after seeing Roma, citta aperta (1945) in a screening in America. The main difference between Wyler’s film and neo-realist classics such as Bicycle Thieves and Umberto D is that Wyler had two big stars and a fully functioning studio machine behind him. 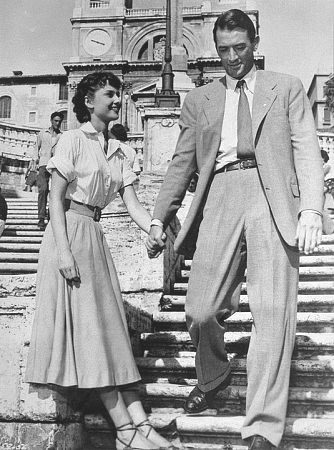 Hepburn and Peck together – looking like a couple really having fun.

In some ways, Trumbo’s script suggests neo-realism in its simplicity and lack of contrivance. But perhaps the major similarity is in the beautiful cinematography. Wyler hired two veteran European cinematographers. Franz Planer had thirty years experience and had worked for Max Ophuls in Europe and Hollywood. Henri Alekan had shot Beauty and the Beast for Jean Cocteau in 1946 and had also worked in Britain. Between them they created fantastic deep focus compositions as Ann scampers through the backstreets after leaving the Embassy – nighttime cinematography with deep black shadows in film noir style followed by sunlit scenes of joyful abandon in the second half of the film. It really is a visual treat throughout.

Gregory Peck is excellent in the film but Audrey steals the show. This was her first Hollywood film, but she had already appeared on Broadway and in British films, including Thorold Dickinson’s Secret People. The Anglo-Dutch Hepburn had an aristocratic background in Holland and she had been a dancer and a photographic model in the UK before becoming known for her films. This background meant that Princess Ann was the perfect role for her but it is her sheer personality and winning smile that drives the film along. Wyler was a great filmmaker but I can’t remember any of his other films being so much fun. Roman Holiday hasn’t dated in any way and it’s not difficult to understand why Audrey Hepburn is still as popular as she ever was (perhaps more so). But what makes the film work most of all is that it seems to follow the neo-realist idea that the story emerges from the characters and locations and is not imposed on them as in so many subsequent American films.