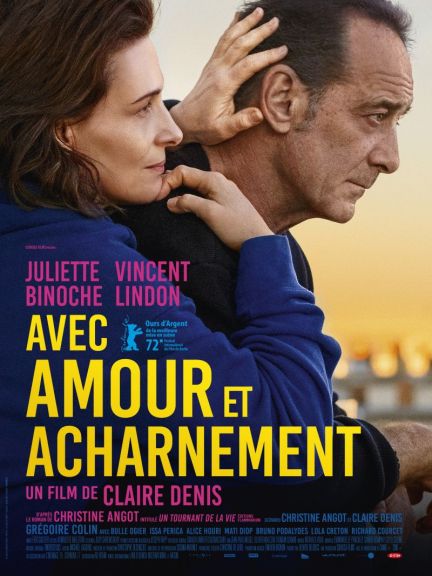 The latest film from Claire Denis arrived in the UK in September. I’m grateful that it is now streaming on MUBI since I was unable to get to see it in the cinema despite local showings. I see that this is one of the director’s more problematic films for audiences, but since it has a strong cast headed by three returning performers from previous Denis films, I was eager to get to grips with it.

This is a film conjured up in the depths of lockdown when Claire Denis was limited to working with only a few close friends and she turned to Christine Angot with whom she had previously worked on Let the Sun Shine In (France 2017). That film was a collaboration, creating a script initially suggested by another project, but in this new film Denis and Angot have adapted one of Angot’s novels,Un tournant de la Vie. So there are three titles here: the novel’s title translates as A turning point in life, the French film title literally translates as With Love and Determination. Both Sides of the Blade comes from the rather lugubrious song played over the closing credits and performed by regular Denis collaborators Tindersticks. Originally, the film’s title was to be Fire – which in some ways seems the best choice.

Denis ‘wrong foots’ from the off when she starts the film with Sara and Jean on holiday in the sun. The main part of the film is a wintry narrative with a preponderance of interior scenes because of the pandemic and with characters sometimes masked. At the centre is a familiar triangle. Sara (Juliette Binoche) has been living with Jean (Vincent Lindon) for around a decade but one day on her way to work she catches sight of François (Grégoire Colin) the man she left for Jean. The two men know each other and they have just decided to work together again on an agency for French rugby players (rugby union – rugby league tends to be in the south mainly and is ignored by much of the French media). I guess the narrative enigma is concerned with how Sara will negotiate this new situation and how Jean will react.

Denis has deliberately omitted most of the back stories of the three central characters, although we are introduced to Jean’s mother (Bulle Ogier) and Jean’s teenage son, Marcus (Issa Perica), currently living with his grandmother. The father-son relationship is not going well. The only other back story that is introduced is that of Jean’s time in prison related to his previous working relationship with François – but we can’t be sure what Jean has done.

This is a film that looks ‘cold’ with its palette of black, blue and grey.  But the emotional intensity means that bedroom scenes run through a range of moods from tender to angry. The cinematography by Eric Gautier involves many close-ups of the principals and sometimes they are quite brutal in their clarity. There is no concession to vanity for any of the actors. Gautier is also behind the camera on Denis’ second film of 2022 after working for auteurs like Jia Zhangkhe and earlier Olivier Assayas. In the last third of the film the emotional intensity rises and I found the editing and the somewhat oppressive score, added to the cinematography, were certainly effective.

The main interest in the film will be the performances of course. Binoche and Lindon are as fabulous as they usually are. Colin is a little harder to come to terms with, even though he is the one with most credits in the Denis catalogue (6), although his previous film with Denis, Bastards was in 2013. Vincent Lindon and Lola Créton (seen with François) were also in that film and it occurs to me now that it is nearly ten years ago, mirroring the the decade in which Jean and François have been apart. In fact this current film has many actors previously in Denis films. Since this film mainly takes place in Central Paris with trips to Vitry, a small town in the Greater Paris region, there are many shots of both the Metro and the RER services and this in turn conjures up the world of 35 rhums (2008), probably my favourite Denis film. In that film Colin plays the prospective love interest of a young Mati Diop, who turns up in Both Sides of the Blade as Gabrielle a pharmacist in Vitry who knows  Marcus, Jean and his mother. She is only on screen for a few minutes which is disappointing. We learn from Gabrielle that Marcus’ mother has returned to Martinique.

Denis is known for her interest in issues around post-colonialism and diasporic communities, especially of Africans in France. Sara works for RFI Radio France International which is a world service broadcasting in several languages. We see her interviewing Hind Darwich, a journalist in Lebanon – I assume she is a ‘real’ person but I couldn’t find her online – and Lilian Thuram one of the best known and most respected footballers in France in the 1990s and 2000s. Thuram has now become an activist and a writer, focusing on issues of racism. He was born in Guadeloupe and he quotes Frantz Fanon in his interview about ‘Whiteness’, focusing on his most recent book. I’m not sure there are too many British footballers with his range of reading and political understanding. Pat Nevin is the only one who springs to mind. Apart from the French-Caribbean connection, I’m not sure what other meanings to attach to these interviews in terms of Sara or the overall narrative. In the same way, Jean and François travel down to Bayonne to the town’s rugby stadium. It’s an almost dialogue free sequence and again it’s difficult to see what the narrative function is.

I’ve noted before how Claire Denis constructs films in ways that don’t allow immediate access to all their meanings. This is another film to which I will return. I’m sure it will be worth it. Nobody else quite makes films like Denis and I treasure the opportunity to wrestle with them. In this case the lack of back story details, especially for Sara (I have some ideas gleaned from clues, but I’m not sure enough to present them here), seems to suggest that these are real people not characters in a story. All the three central characters are flawed human beings. I don’t think we learn enough about François to have an opinion about him. Jean intrigues me (as an older male in the audience) but Sara is perhaps the central character whose emotional state is explored without judgement. I don’t know how I feel about her. There are several bedroom encounters between Sara and Jean and Sara and François. The emotions and Sara’s desire are important in these scenes but I’m not sure why some critics have called this an ‘erotic thriller’. But this is certainly a film for grown-ups.