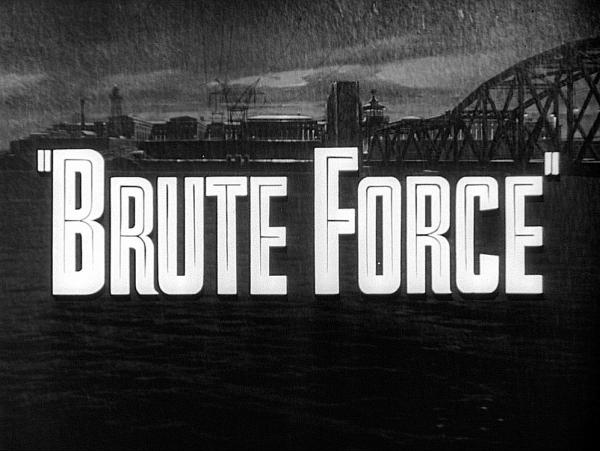 The 2016 restoration of Brute Force is currently available to stream on MUBI. A pre-credit text explains how the restoration has attempted to recreate the look of the original nitrate film print which had been lost and the results certainly look impressive in HD. This is an important film in many ways and a must watch if you’ve never seen it. It’s directed by Jules Dassin who was active in this post-war period in Hollywood before the full impact of HUAC and the anti-communist witch hunt. Although the film is a genre picture presenting an attempted prison break-out it, it is also a political film with a very strong commentary on American society. Dassin would be forced to leave for Europe after completing just two more films in the US. 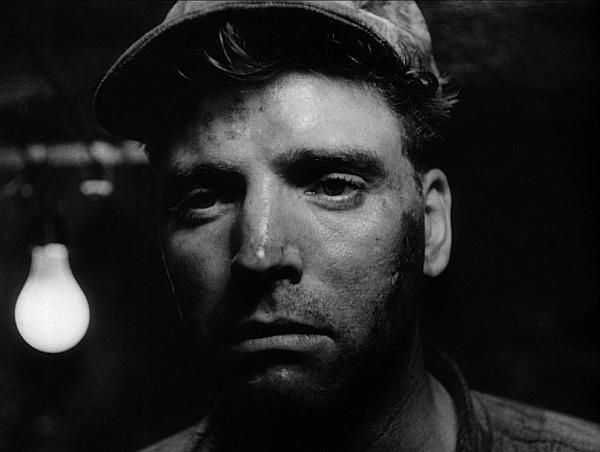 Lancaster is a powerful physical presence, remaining expressionless for much of the time

The film has an excellent ensemble cast headed by Burt Lancaster in only his second film role following The Killers in 1946. The script is by Richard Brooks from a story by Robert Patterson and with cinematography by William H. Daniels and music by Miklos Rosza it was guaranteed to be a classy production. It was the second picture of three that Lancaster made for the producer Mark Hellinger who died far too young in 1949. Hellinger operated much like an independent producer but his later films were distributed by Universal. The film does, however, resemble a studio picture with an extensive set constructed at Universal City Studios to represent ‘Westgate Penitentiary’. Apart from a series of short flashbacks to show how the prisoners featured come to be imprisoned, the setting in the prison becomes almost another cast member as the narrative plays out across the set. It is presented with a general air of foreboding through Daniels’ stunning cinematography and Rosza’s score. It is made distinctive by situating the prison on the other side of a wide river. The gatehouse resembles the entrance of a medieval castle with a form of drawbridge operated from a control tower and in conjunction with the opening of the gates. 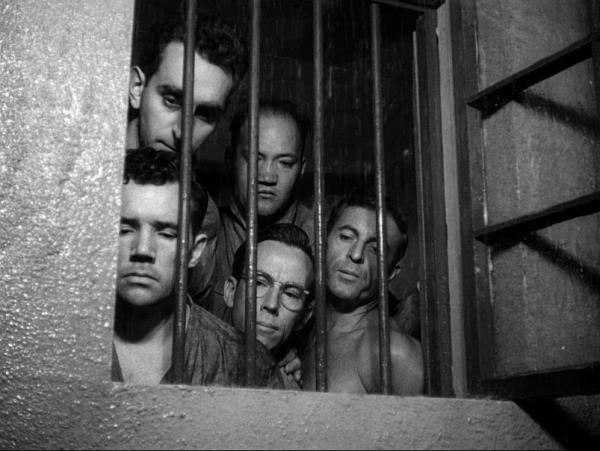 The other five men in Joe’s cell watching him being released from ‘solitary’ (clockwise from bottom left, Howard Duff as ‘soldier’, Jeff Corey as Stack, Jack Overman as Kid Co, John Hoyt as Spencer and Whit Bissell as Lister)

The focus is on a single cell in which a distinct group of six men find themselves confined. Lancaster as Joe Collins has been in solitary and he returns to his cell after his time alone. His return coincides with the departure of an inmate who we assume has been executed. As the prisoners watch from their cell windows, ‘Sir Lancelot’ the calypsonian relates his tale. Sir Lancelot was memorably a figure in two of the successful Val Lewton pictures at RKO. The opening shot also introduces us to the prison’s chief guard (Captain Munsey) brilliantly played by Hume Cronyn, a small man with power over the the tall and physically imposing Lancaster. Brute Force is a genre picture recognisable as a ‘Big House’ prison film (named after the 1930 film from MGM). Some prisoners are obsessed with the idea of escaping. Prison guards are intent on stopping them and prison wardens are either ‘liberal’ and concerned about rehabilitation or quasi-fascists who thrive on the power they are given over prisoners and the pleasure they take in beating them down. 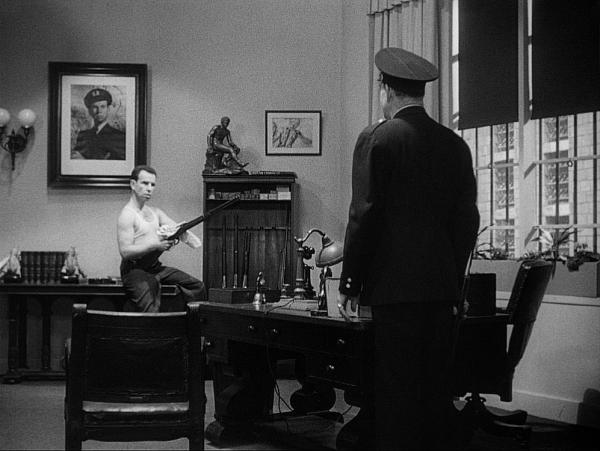 Brute Force builds on these basic themes by splitting the warden/chief guard position so that a ‘weak’ warden (Roman Bohnen) is undermined  by his chief guard. Pressure from outside means a threat of action if the warden doesn’t increase ‘discipline’ and prevent further ‘troubles’. There are plenty of other familiar genre characters – the liberal doctor figure who sides with the prisoners, the stool pigeon, the gang-leader who maintains a control position inside the prison, the ‘trusties’ who are able to wander more freely and pass on messages. The inciting incident is when Collins learns that his girlfriend needs his presence if she is to survive a difficult situation. Collins must escape and the die is cast. 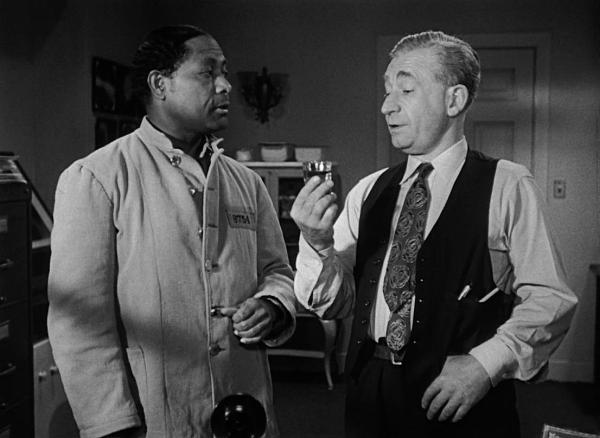 What distinguishes Brute Force is that while all the familiar genre elements are in play, there is a political discourse that pervades the narrative and at times is openly expressed. For instance the doctor is the moral conscience of the prison and its philosopher in residence. When the warden is threatened by the representative of outside political power, the doctor is given the space to make a speech analysing the inhumanity and fascistic abuse of power that is to be unleashed. The doctor is also something of a lush and therefore as several reviewers point out, also a prisoner himself in his role, unlikely to get work elsewhere. Another feature worth picking out is the sheer scale of the prison and its many inmates. Mark Hellinger goes all out to create a visually impressive film with scenes such as that in the canteen, filled with extras. There is a real sense of the mass of prisoners as a collective force opposed to the monolithic power represented by the prison itself. It’s interesting to me that the contemporary reviews don’t emphasise this feature of the film. It’s not really until the more recent reviews of the restoration that much discussion of the politics of the production appear. There is a recognition that Captain Munsey has a uniform that might be seen as referring to a fascist dictator rather than an American prison guard but, in this period just before HUAC’s investigation of Hollywood reached its full flow, perhaps reviewers were also keeping their heads down. It is clear to me that the brutality and violence in evidence in the prison is a recognition of the brutality of the Second World War caused in large part by fascist attacks on many groups across across Europe. Dassin directed several of the actors from the radical theatre groups of the 1930s. The principal vocalist of an anti-fascist message is the doctor played by Art Smith who was in Group Theatre and who was so memorable as Humphrey Bogart’s agent in In a Lonely Place (1950) before he was blacklisted. Another Group Theatre actor was Roman Bohnen. Jeff Corey (as one of Joe’s cellmates) had been a member of the Federal Theatre Project in the 1930s, another group attacked as left-wing. He too was blacklisted after refusing to testify when subpoenaed by HUAC. Dassin himself had been a Communist Party member up until 1939 when resigned because of the Stalin-Hitler pact. 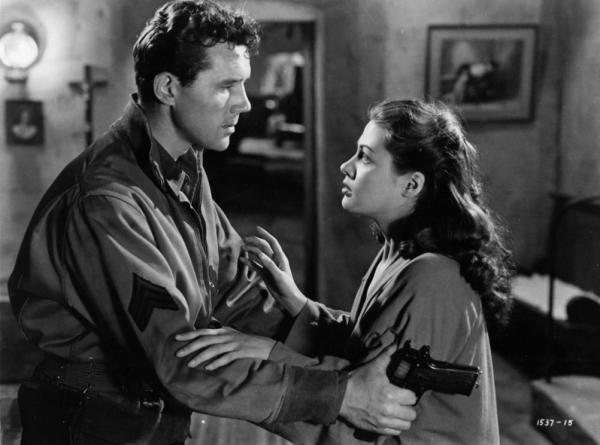 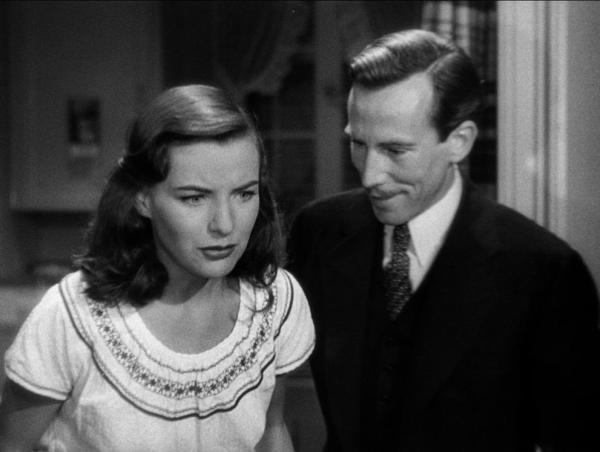 The only negative aspect of Brute Force for me are the flashbacks to the backstories of the prisoners explaining why they are in prison. These each involve a female character and most of the time she turns out to be the reason why her man is in prison whether she intended this outcome or not. Each woman has been seen as a femme fatale in the analysis of Brute Force as a film noir – the prisoners are doomed men and the women are responsible for their incarceration. Cynical critics suggest that Universal simply wanted an excuse to show these female stars as an extra attraction for audiences. Today it seems a misguided move. Perhaps just the one, probably Ann Blyth as the sick young woman Joe wants to be with, could suffice? But to show just one would undermine the ensemble/collective feel of the narrative. 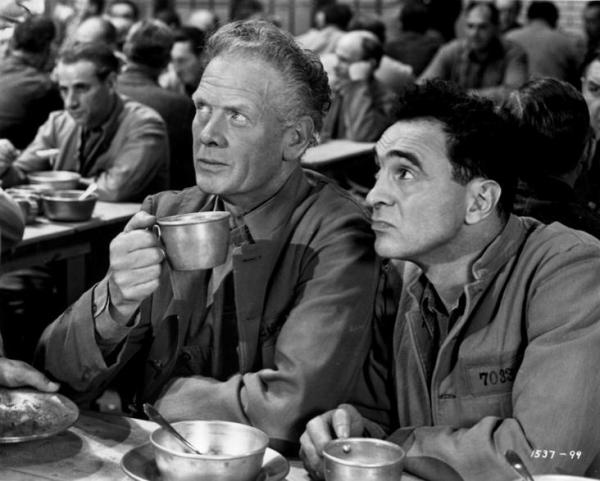 Gallagher (Charles Bickford), the gang-leader who runs the prison newspaper and his side-kick Louie (Sam Levene) who acts as the reporter

In the end, the film is an indictment of the brutalism of American ideas about prisons (still seen as extreme today by most liberal democracies internationally) and it is the sense of the majority community of the prison that is important. The brutality in the film is shown by Munsey and by the prisoners themselves towards stool pigeons, but in the end the narrative places us in support of the prisoners trying to escape. We know instinctively that the system is corrupt and nobody should be locked up and treated the way these prisoners are. As the Doc observes, the prison community is like a bomb and all that Munsey can think of to do is to stamp on it. He shouldn’t be surprised when it explodes.

The best trailer for the film is probably this one on the Criterion website, which also features an essay on Burt Lancaster by Dan Callahan and a short observation on the acting in the film by David Bordwell: