Benedetta is paraded before her trial begins

Paul Verhoeven’s films are difficult to write about, partly because any commentary is going to be framed by existing discourse about the director’s previous films and the notoriety they have received as well as the misunderstandings about what they might mean. I have seen less than half of Verhoeven’s output and I haven’t necessarily enjoyed all of what I’ve seen, but I’ve seen enough to know that he is a talented and skilful director and that he always ‘delivers’ something worth watching and arguing about. Also on this blog is a posting on Elle (France-Germany-Belgium 2016). Benedetta has already been discussed widely so I’ll focus on just some of the questions about what kind of film it is and how it might be read in the context of its production and eventual reception.

Lambert Wilson as the nuncio from Florence

The film is now available on MUBI (and through the MUBI app on Amazon Prime) in the UK. MUBI also released the film in UK cinemas. This availability means I can go back and look at scenes in detail. I’ve also downloaded the (dual language) Press Pack via Unifrance. An interview with Verhoeven reveals that he often isn’t sure why he chooses certain topics, but in this case the book by Judith C. Brown Immodest Acts (1986) was brought to him by a long-standing collaborator. Verhoeven, who had been interested in the possibility of a ‘sacred’ narrative for some time, was attracted by the fact that the book was based on the actual notes of the trial of Benedetta, then the abbess of a convent in Pescia, Tuscany in the early 17th century. She was accused of a lesbian affair with a younger nun. This seems to be the only documented case of a trial of this nature and Verhoeven was also intrigued by the detailed account of their sexual liasion. Thirdly he realised that this was a film about a woman who had made herself powerful in a patriarchal society dominated by religious authority. These three reasons for selecting the project fit in nicely with Verhoeven’s perceived modus operandi – the chance to provoke through scenes of lesbian sex, but with the exploration of a woman’s agency as justification.

The oddity about the setting of the film for me is the question of the precise historical period. Benedetta was born in 1590 and her ‘visions’ began in 1614. The trials she faced began in the 1620s. In the film, the presence of bubonic plague plays an important role. The ‘second plague’ in Italy has been dated as starting in 1629 with Florence affected in 1631-33 and this fits the narrative of the film, being brought from Florence to Pescia. Why then does the Press Pack tell us the events took place in the late 17th century? In one sense it is not important but it is annoying when films present events to a general audience with no real conviction. I found the setting confusing because at first I assumed we were in a much earlier time period, partly because of the soldiers in armour. It wasn’t until later that the carriage of the nuncio (the papal authority in Florence) arrived, giving a sense of the 17th century. At this time the Italian states were not unified and most, like the Grand Duchy of Tuscany were not as developed as many parts of France and England. Pescia was a small city but it had three convents and demand by families to see their daughters looked after in a convent at a time of economic strife is represented in the film by Benedetta’s arrival aged 9. Verhoeven and his screenwriter David Birke stick fairly closely to historical facts with just a few inventions. Overall this is an intelligent film. As a non-believer, I found the narrative development to be plausible – engaging but not shocking. 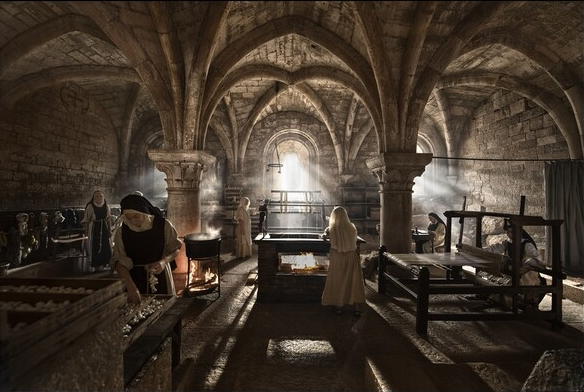 The shoot used the Cistercian Abbey of Le Thorenet in Var, France

The technical credits on the film are all very good, particularly the cinematography by Jeanne Lapoirie. I realise now that I have seen a great deal of her work especially for François Ozon and Catherine Corsini. I think that it must have been good for Virginie Efira who plays Benedetta to have worked with Lapoirie on her previous film, Impossible Love in 2018. It was because of Efira’s performance in that film that I was quite keen to see Benedetta. Verhoeven reveals that his film was shot digitally and hand-held, commenting that the developments in digital cinema allowed scenes in indoor settings to be filmed with only available light, including candlelight. IMDb lists the locations used as ranging across several sites in Italy and France and I note that convent interiors and exteriors used three locations, one in Italy and two in different French locations. I’m not surprised the shoot was expensive at around US$24 million, large for a European production. The score by Anne Dudley is also effective in the presentation of 17th century Tuscany:

I drew on the film’s beautiful landscapes, complex storyline and the entangled tapestry of social dynamics to compose the soundtrack. Renaissance choral music was an influence on the score, with female voices having a prominent role. (Anne Dudley from her website)

The film did remind me of some other convent-based films. The story shares a narrative line about the abbess spying on a nun who she believes is transgressing in Powell and Pressburger’s Black Narcissus (1947). In the case of Deborah Kerr’s Sister Clodagh this is more accidental than Charlotte Rampling’s actions as Sister Felicia in Benedetta. There is also another direct visual connection between the two films that I won’t spoil. I was also strongly reminded of the Roger Corman film, The Masque of the Red Death (1964). Although the stories are very different, both films take place in Italy during a plague and Vincent Price’s Prospero plays a similar role to that of Lambert Wilson’s nuncio in Benedetta – and Jane Asher plays a peasant girl Francesca with the innocence of the young Benedetta. Verhoeven tells us he cast Lambert Wilson after seeing his role as the abbot in Of Gods and Men (France 2010). Benedetta is blessed with four outstanding performances and as well as Efira, Rampling and Wilson I must mention Daphné Patakia as Bartolomea, the young woman who seeks refuge in the convent. Because of abuse by her family she is no longer ‘innocent’ and virginal. In narrative terms she provides the second ‘disruptive’ force following Benedetta’s visions. Patakia is Belgian-Greek and was identified as one of the ‘Shooting Stars’ of European cinema in 2016. For Virginie Efira, born in 1977, the role of the adult Benedetta requires her to portray a young woman in her early twenties, just as she does in An Impossible Love. Once again she does this convincingly for me. 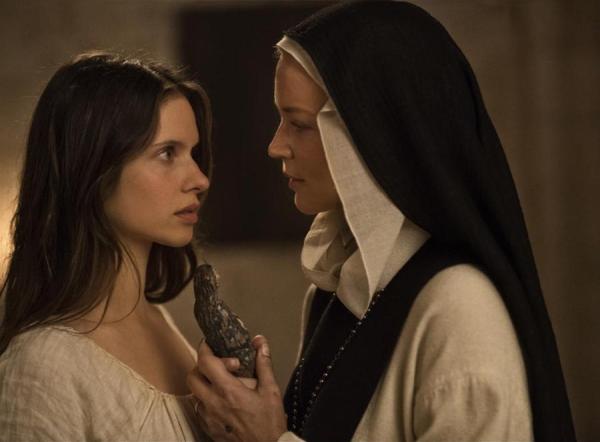 Daphné Patakia as Bartolemea, the lover of Benedetta with the figure of the virgin, an important prop!

Benedetta had a difficult time getting into cinemas. This wasn’t primarily due to the expected protests from religious groups but because the director had an accident close to completion which required a long recovery and then Covid prevented the film’s launch. The film was mainly shot in 2018 and appeared at Cannes in 2021 before a release in France and the US. The context of its release means that reading the the narrative is perhaps slightly different than it might have been when we were all somewhat less familiar with the conditions of living through a pandemic. When shooting began on the film, the idea of an ‘intimacy co-ordinator’ was just starting to be implemented on some Hollywood shoots. Verhoeven has a long history of provocation in terms of displays of, mainly female, nudity in his films. He must also have been aware of the allegations made by the two young lead actors about director Abdellatif Kechiche’s behaviour on set in Blue is the Warmest Colour (France 2013), a film with extensive lesbian sex scenes. That film received criticism from some LGBTQ+ commentators, including questions about working with male directors. The debates about the ‘male gaze’ in France seem to have been slightly different in France than in the US/UK, although at least one leading actor, Adèle Haenel, has spoken out strongly against what she sees as a sexist film industry. Charlotte Rampling has been involved in several controversial films in her long career and therefore unlikely to be fazed by any questions about Benedetta. In a Press Notes interview with Virginie Efira, she sums up working with Verhoeven and her co-star Daphné Patakia on the sex scenes like this:

The sex scenes were very pleasant to do, thanks to Paul, and Daphné of course. A sex scene is easier to perform when you sense that the other actor or actress is at ease, not thinking that something they don’t want to give will be stolen from them . . . There was everything in those scenes. It was like a choreography. Paul had storyboarded everything, but he was very open to our suggestions. It was very collaborative and upbeat.

Of course, the interview was part of the promotion for the film, but watching the film I didn’t get the impression that the actors were being coerced in any way. Perhaps more statements will emerge over time, but I doubt it. Whatever criticisms might be made of Paul Verhoeven, I think he is sincere in making films about women who are given agency in his narratives. I was surprised by how much I enjoyed and admired this film as a an historical narrative.