Often with film festivals I start a screening knowing little about the film – which has both advantages and disadvantages when it comes to managing expectations. This is especially true of My French Film Festival because I buy a ticket that covers most of the films (there are a couple which are not available in the UK). I started All Hands on Deck with no idea of what I might be watching. Halfway through I thought the film was OK but a bit underwhelming. The last part was better and in the end I was pleased to have seen it. To my surprise I then realised that the director Guillaume Brac is now quite well-known internationally and is being touted as an Eric Rohmer-like filmmaker for contemporary cinema. This film screened at Berlin in 2020 and was released in France in 2021 to acclaim and recognition as a successful comedy. I realised that I had looked briefly at the collection of Brac’s films currently on MUBI but had not bothered to investigate further. It turns out that this year there are several titles from My French Film Festival also on MUBI.

(from left) Chérif, Edouard and Félix

The English title of the film is not very helpful and the French title refers to ‘boarding’ which is ambiguous so I’ll need to outline the plot. Félix (Eric Nantchouang) and Chérif (Salif Cissé) are two young African-French men in Paris. Félix is a carer who we first meet visiting an elderly woman and then on a night out where he meets a young woman, Alma (Asma Messaoudene), at an open air dance by the Seine. He learns that she is about to go on her summer holiday, staying in a house with her family in rural France. (The house seems to be in Die in Drôme department in South East France.) On a whim, Félix decides to take a week off and surprise her with a visit. He persuades Chérif to join him and they sign up for a car share journey to a campsite close to Alma’s holiday home. The car’s driver, Edouard (Édouard Sulpice), is disappointed to discover they are not the young women he was expecting. Edouard is a young white guy and socially awkward. He and Félix do not get on but Chérif is a calming influence. I think that ‘boarding’ actually refers to the adventures that follow at the campsite, possibly as ‘boarders’ who are in different ways ‘house guests’.

The Rohmer tag makes sense in terms of the dialogue-driven interactions between the three young men and a handful of other young people on the campsite. As well as Alma we meet her older sister and a couple of young men who are working at the site. Chérif also meets someone and it is his relationship which perhaps is the most affecting. Edouard has a few setbacks but he begins to socialise and turns out to be someone who can ‘come out of himself’. The one thing that I did feel in the latter half of the film was that this was not a film that wanted to use the genre conventions of the French summer holiday comedy. Apart from one rather over-bearing character there are no real ‘bad guys’ in the film and this was refreshing – though I did find the occasional outbursts and then fulsome apologies a little annoying. 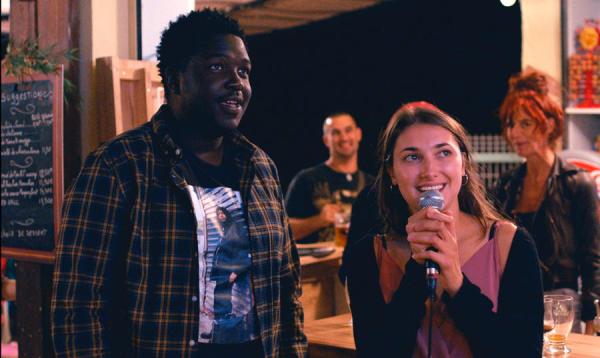 Chérif and Hélena (Ana Blagojevic) at the karaoke bar

Reading the film’s Press Pack (in a Google translation) I learned that the actors are all students at the Conservatoire National Supérieur d’Art Dramatique de Paris. Brac took up a commission to make a film with the students and he began with a workshop and a simple outline from which the students had to build a character. The final script was then written by Brac and his writing partner Catherine Paillé. The most interesting questions involved the two African-French students. They were clear that they didn’t want to appear in typical roles as guys from les banlieues in Paris and they didn’t want to be in a narrative which focused on their difference/identity. Brac says he understood this but also felt that it was unrealistic and unhelpful to try to ignore their identity, especially in a tourist area in rural France. He and the students agreed that identity issues and typical characters shouldn’t be the focus of the story. I think that the film does avoid this problem but that it is indeed impossible to ignore the fact that Félix and Chérif are recognisable characters, even if they don’t behave in stereotypical ways. Personally, I found Félix a slightly annoying character and Chérif someone I would like to have met on holiday and that’s probably a win for the presentation of the characters. I can see that I should have looked more carefully at the selection of Guillaume Brac’s films that are available on MUBI and I’ll try to watch some of the others. If you come across this film it’s definitely worth a look.