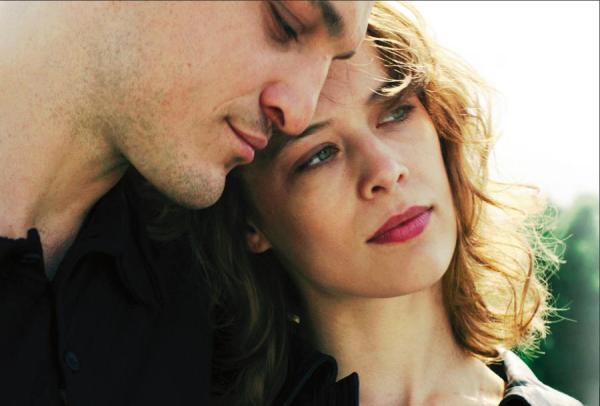 Christian Petzold is one of our favourite directors and Undine is a film that we couldn’t miss. It is being streamed by several platforms and I caught it on MUBI which is also offering a retrospective of Petzold’s earlier films. I was vaguely aware of the European myth and folktale/fairy tale about the water nymph Undine/Ondine, but I decided to leave my research until after I’d seen the film. I think now that perhaps I should have done the research first. On the other hand, my seeming struggle with the film narrative might simply be down to watching a streamer rather than sitting in a cinema watching the film on a big screen. Either way I still enjoyed the film and I will think about watching it again soon. 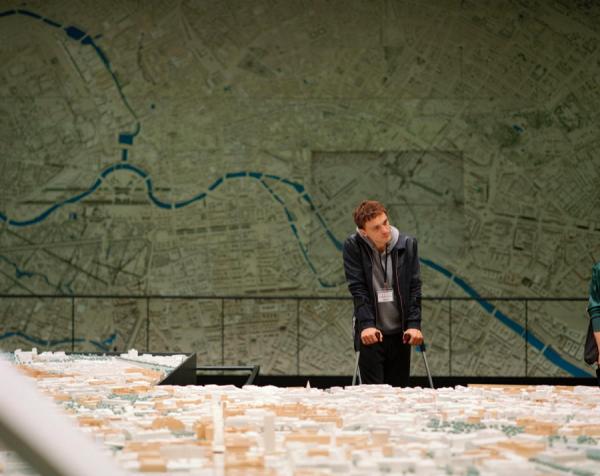 Christof comes looking for Undine in the Museum

Undine is love story, a fantasy and a form of social commentary/historiography about Berlin. Its echoes in Petzold’s earlier work are most clearly there in Yella (2007) and also in Phoenix (2014) but there are also numerous references across European narratives more generally. Undine (Paula Beer) is a historian working as a freelance lecturer at a museum in Berlin. She delivers talks based on the dioramas of Berlin’s architecture at different periods in its history. We only hear snippets of her talks but that’s enough to learn something about the history of the city and especially its beginnings as a settlement built on a marsh. The modern city straddles the River Spree and much of it is given over to trees, parks and water. An eventful day sees Undine breaking up with her lover Johannes (Jacob Matschenz) and then meeting Christof (Franz Rogowski), an industrial diver who works maintaining underwater installations such as pipeworks etc. Christof and Undine rapidly fall in love but there is a lingering sense that Undine may not have finished with Johannes completely.

It’s difficult to discuss Undine without spoiling particular scenes which I have no desire to do, so I’ll limit myself to more general comments. The film has been generally well-received by critics but, even more than some earlier Petzold films, it poses problems for audiences. What is it ‘about’ and how should we approach a reading? My feeling is that it is definitely a love story and it is also saying something about history, the ‘layering’ of historical events and their changing interpretations over time. Perhaps one of the most challenging aspects of films like this is the blending of a form of realist filmmaking with elements of fantasy in the narrative. Some audiences embrace this eagerly, others find it too difficult and it often becomes a reason to dismiss films. It is also something which spills over into the distinction between ideas about art cinema and commercial genre cinema. A good, relatively recent, example of a film which presents similar problems might be Guillermo del Toro’s The Shape of Water (US 2017). OK, that film won 4 Oscars as a more obvious fantasy, but it represents an attempt to use fantasy as a vehicle to explore culture and social commentary. Petzold has been classified as part of the ‘Berlin School’ of German directors, a loose grouping that refers to directors who trained in Berlin in the 1990s and became recognised in the international art and festival film market from the 2000s on wards. One shared feature of the films of several of the directors is a depiction of life in contemporary Germany, often in Berlin itself (e.g. in some of the films of Angela Shanelec). Petzold constructs narratives presented in realist terms, but often drawing on intertextual references to other films, literature or historical events or periods. Yella concerns a young woman from former East Germany who travels to the West, becoming involved with the airless world of advanced capitalism – but is she really there, is she what she seems? I was reminded in that film of the introduction of ghosts in Japanese cinema which began to appear in realist environments in J-horror films of the late 1990s and early 2000s. In Phoenix, Petzold drew inspiration from a French novel that first became a British film. He transferred the narrative to a setting in the immediate post-war rubble of Berlin, thus perhaps stressing the generic ‘rubble-film’ as his realist base for what is a preposterous but highly engaging story.

After thinking about Undine for a long time, and reading many reviews, I’ve finally managed to get a handle on my own reading of the film. The myth of the nymph is present across many cultures and is probably most familiar via the mermaid or in the Celtic/Nordic form of the ‘selkie’ (seal-woman). The German folk tale of Undine appears to derive first from the work of the Swiss philosopher Paracelsus and was then formulated as a fairy tale novella in 1811 by Friedrich de la Motte Fouqué as an example of German romanticism. In 1811 Berlin was the capital of Prussia – previously it had been the capital of Brandenburg. After 1871 it became the capital of Germany with the founding of the nation state. The layering of Berlin’s identities is represented in the museum which offers the dioramas of Berlin’s building phases described in her lectures by Undine. Petzold has been particularly scathing about the development of contemporary Berlin which attempts to sterilise the past even while presenting this history. A few years ago this might have been discussed as an an example of postmodernism. The romanticism of the Undine myth then becomes a disruptive force that constantly reminds us of the past. It also powers the love between Undine and Christof which negates the sterility of the recent urban development. It is this tension which makes the narrative so fascinating for me.

Undine in her formal dress in the museum

But I’m also bowled over by the romance itself. Paula Beer and Franz Rogowski are terrific together, even more so than in Transit (2018). I’ve been impressed with Rogowski since I saw him in his lead role In the Aisles (2018). Paula Beer blew me away with her performance in Frantz (2016) by François Ozon. As Undine she transforms herself again, making the most of her role as a freelance historian. She seems to be both efficient and organised but also hinting that she has come from ‘another place’ – and is about to go back there. As a reviewer remarked, her appearance in a white blouse and dark skirt and shoes is formal in the museum but her loose hair and slight dishevelment also indicates her fluidity. She won Best Actress when Undine screened at the Berlinale in 2020. I was intrigued to read that Beer was recommended to Petzold by Nina Hoss who featured in six of Petzold’s previous films. Petzold has hinted that one day Hoss and Beer might appear together. That would certainly be worth seeing. Petzold has spoken a great deal about Undine and here’s a quote from a Cineuropa interview:

Undine made me think of the relationship between directors and main actresses as well as the one between muses and artists. Isn’t it a sort of perpetual betrayed love for all the Undines of this world? Don’t men always dominate everything? It’s not that Undine wins in the story; she has to go back in the water and wait for the next man to come along. She exists only through men, and that is a horrible curse. Our story aims to explore an Undine who is struggling against this. Then along comes a man, a proletarian, an industrial diver, who interferes with the curse. He is not suspicious; he’s innocent and for the first time seems to see her primarily without any sexual desire and without wanting to dominate her. This is new for her, and a path to a new world seems possible.

I hope all these attempts to read the film don’t put you off. Undine is one of the best films I’ve seen since the lockdown began. It requires ‘work’ but it’s very much worth the effort. It is available to buy or rent from many outlets.

In this clip from the film we get a subtle reference to the underlying theme to the film and we experience the moment when Undine is with her new lover and sees her old lover: