‘Mangrove’ refers to the restaurant opened by the Trinidadian Frank Crichlow in North Kensington in 1968. Crichlow had previously run El Rio, a café around the corner. The café had attracted attention by the police because of allegations of drugs being used there. Crichlow was determined that The Mangrove would become a respectable restaurant serving West Indian food. It soon became popular, not only with the local West Indian community, but also celebrities (musicians including Bob Marley and Jimi Hendrix), artists/writers and activists. Despite this (or perhaps because of this?) the police raided the restaurant more than once between 1969 and 1970. Fed up and frustrated by these raids (which generally found nothing) Frank Crichlow and others from the community were joined by Darcus Howe, his partner Barbara Beese and Altheia Jones, an activist from the British Black Panther group, in organising a protest march which aimed to pass the three police stations in the area. The march gathered support but was in effect ambushed by the police who arrested nine marchers including the four leaders. The ‘Mangrove Nine’ were charged with ‘riot and affray’. As this was a serious charge the case was heard at the Central Criminal Court (i.e. ‘The Old Bailey’ in 1971). The case lasted a punishing 11 weeks with prison sentences hanging over the accused. These are the facts of the case. I haven’t given the outcome of the case but you can look it up.

Steve McQueen has created a film narrative which runs from 1968 to 1971 and includes most of the important elements of the historical record. His script was co-written with Alastair Siddons. I want to make a couple of points about McQueen’s formal approach first. Mangrove is longer than the other films comprising Small Axe and it is presented in a ‘Scope ratio. It presumably has a bigger budget too and includes CGI to portray the area in the 1969 with Westway, the elevated inner city motorway extension, which was being built at the time. There is also a sense of expansiveness and expressionism in the cinematography by Shabier Kirchner, especially in the Old Bailey trial scenes. Also,  it’s one of only two out of the five films to feature an international Hollywood star with Letitia Wright, the Guyanese-British actor seen in films like Black Panther (US 2018) cast in Mangrove as the political activist Altheia Jones.  It’s no surprise that Mangrove has been presented as ‘Episode 1’ of Small Axe.

Formally, the film’s narrative structure seems to fall into three sections. The first sets up the opening of the restaurant and the excitement of a community finding it has somewhere to meet and to enjoy its own culture. The second part focuses on the clashes with the police during the raids and on the march. The final section is the long trial sequence. The trial draws on some familiar courtroom drama generic conventions whereas the first section has elements of melodrama in the relationships focused on the restaurant – which also carries through into the ‘home life’ of Darcus Howe and Barbara Beese (but oddly not so much into the relationship between Frank Crichlow and his partner Selma James).

Overall, Mangrove is a conventional presentation of a series of events with at times a documentary feel in terms of details. I did find some of the CGI slightly unreal and the half-built Westway looks almost as if it is a part of a science fiction narrative in the opening sequence as Frank walks home through North Kensington. The trial section is very well handled and works much like classical Hollywood. In a way though, I was more interested in the first part of the film that explores relationships within the local community. The details here are revealing. The Mangrove became an informal hub for the organisers of the Notting Hill Carnival  and the music culture of Trinidad and the South Eastern Caribbean are included on the soundtrack. Mighty Sparrow appears along with the smooth 1960s country star Jim Reeves, a favourite in the region. I think the inclusion of so much Jamaican music in the form of ska/rock steady and reggae from the late 1960s/early 1970s, especially Toots and the Maytals is there to represent the more familiar music for the wider audience. 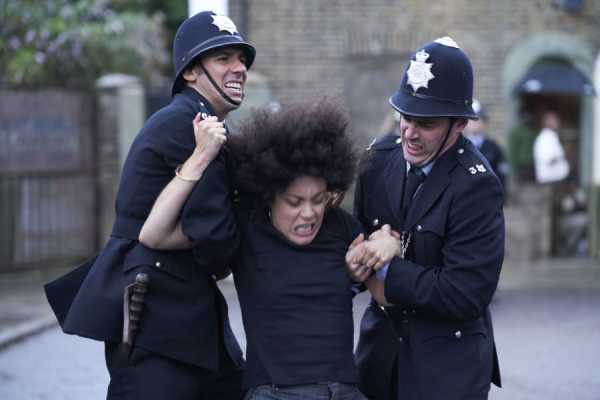 Shaun Parkes as Frank Crichlow is very good and it does seem that in the 1960s and into the 70s Trinidadians rather than Jamaicans comprised the the main group of writers and activists in the West Indian community. Frank doesn’t want to be political but he is clearly an important local figure. It’s also good to see the older members of the community using the restaurant as a social space. It must be difficult for some viewers to accept the attitudes of the police as depicted in the film but this was definitely how it was. Police culture and behaviour is a strong element in three of the Small Axe films and in the 1970s and 1980s, the Metropolitan Police had a dreadful reputation for corruption and a canteen culture of racism and sexism. Inevitably McQueen is forced into generic modes of characterisation. There has to be a younger constable who is not inherently racist but is pushed towards action by the group and threatened with being ostracised if he doesn’t conform. I did find the police in action to be sometimes quite comical in a Keystone Cops kind of way. This is before the helmets and truncheons were replaced by hard hats and riot shields and batons. There is nothing comical about their violence, however. I was stunned to learn that the police officer who led the raids was ‘PC Pulley’, a real person. I’m still baffled as to how he was in a position of enough authority to indulge his own racist mission. A surprise for modern audiences is just how many uniformed officers a local police station could turn out for a small protest march. I don’t know the actual numbers in 1970 but in the later 1970s, all demonstrations and also the Notting Hill Carnival were all heavily policed.

The melodrama elements are important in the middle section of the film and I was impressed by the representation of the Darcus Howe-Barbara Beese relationship. Both actors are again very good and Malachi Kirby as Howe for me caught both the voice and authority of the young activist from Trinidad. The scene represented above is when Howe suggests that the C L R James book Black Jacobins should be taught in schools in the UK. Breese replies that perhaps not in the primary schools where she works. The point here is that these are activists with real relationships rooted in the ‘lived experience’ of their communities. Here Barbara reminds Darcus that they have to be practical and think about their small son as well as their political work. I think I would be interested to see this whole melodrama of relationships and family background explored in more detail in something like a a long-form narrative of its own, but I guess that McQueen does this by offering four other stories each with a different focus.

I should add Letitia Wright’s excellent performance as Altheia Jones to round out my appreciation of the leading players. In fact, the whole cast is impressive and the production overall is a great achievement. Mangrove provides a platform for the other four films and I’ll attempt to relate each of them to the overall project as we go along. One last thought, the years 1968-1971 were tumultuous in London, especially for any kind of political activism. While these events in Notting Hill were important struggles they sat alongside protests over the war in Vietnam, the resistance to apartheid and the boycott of South African rugby and cricket tours. The civil rights campaign in Northern Ireland was about to become an issue in London (there is a moment when anti-Irish prejudice is exposed in the local Notting Hill police during the surveillance of the Mangrove). Eventually, the struggles of the West Indian community would become a larger story and activism would spread across the capital, something which McQueen picks up in the other four films.