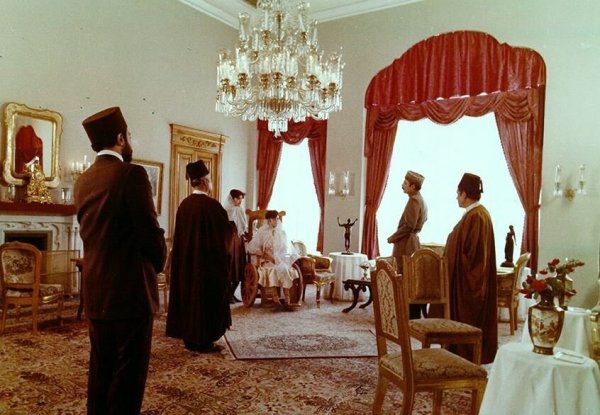 A formal audience in the house. The stepdaughter receives the commissar (second right).

My first screening of this year’s festival, which is primarily online, was one of three ‘free’ archive screenings. This restoration of a film deliberately marginalised by critics and industry officials in 1976 and banned after the Islamic Revolution in 1979 came about only when the original reels of film were found by the director’s son in a street market in 2015. Up until then only heavily degraded VHS copies were available after the director Mohammad Reza Aslani was allowed back into the industry limelight in the late 1990s, mainly as a documentary maker.

The presentation was via BFI Player with a short introduction by Robin Baker and the director’s daughter Gita, a film scholar, and then a pre-recorded Q&A from the couple (in a split screen) after the screening. Everything worked smoothly. I wasn’t sure what to expect from the film. The pre-publicity suggested “the Persian lovechild of Tennessee Williams and Ingmar Bergman”. I thought this sounded unlikely and as the film rolled I thought I recognised a number of possible global links. In particular, I was reminded of Indian, Chinese, Korean and Japanese films with narratives featuring a feudal household experiencing a moment of decline and change in a grand house while outside a group of working-class women are constantly washing clothes in the large pond within a courtyard. They seem to play the role of a Greek chorus discussing all the goings-on and the sins of the rich. I was reminded of Almodóvar’s Volver and the women dressing graves among other films where groups of women are washing together. In the Q&A that followed, Gita told us that her father was influenced by two cinéastes, Visconti, especially re The Leopard (1963) and Bresson (mainly for the way he handled actors). The Leopard certainly makes sense as a narrative about aristocratic decline in the face of revolutionary forces. I don’t know Bresson well enough to comment on that reference. 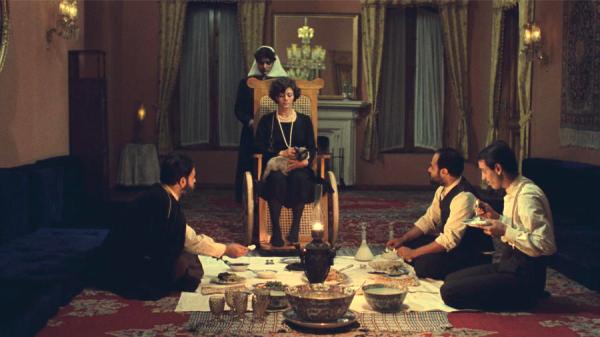 The formal arrangements for dinner

The action in the narrative is all inside the house, apart from the women and the last surprising shot of the film. The woman who owned the house has just died and now her second husband has assumed control. But he has problems. Also in the house is his stepdaughter who is confined to a wheelchair and seems to be not in good health generally. The other two residents are two brothers, his nephews(?) who he has ‘taken in’. One of them wishes to marry the stepdaughter. There are several servants for the house as well – an elderly nanny, a young woman who is the stepdaughter’s maid and some kitchen staff. Finally there are two visitors, an elderly doctor and a ‘commissar’, (a police officer?). The audience is likely to wonder when the story is set. The only clue I could see was the commissar’s uniform which for me suggested the 1920s/30s. In the Q&A Gita told us that in the 1920s there were women who made quite dramatic feminist statements and that the stepdaughter repeats one of these statements in her description of a dream she has. The interior of the house in terms of layout and decoration suggests a period possibly a little earlier. Again, the final sequence in the film will provide some answers. 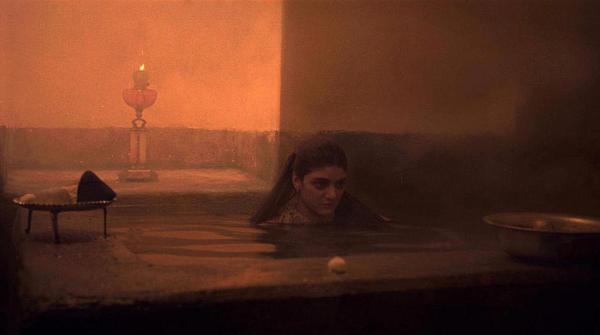 The cellar represents another world in contrast to the formal rooms above . . .

In genre terms this is a gothic melodrama that moves towards violence and horror. There is an element from Clouzot’s Les diaboliques (France 1955) and the house reminded me of The Handmaiden (South Korea 2016) which also shares other elements with this film. The fact that the film so shocked and confounded Iranian critics in 1976 probably says more about the state of cinema and culture at the end of the Shah’s regime than it does about the film itself. Those critics would at least have had more understanding of the details of the mise en scène of the scenes in the house, including the paintings on the walls and the domestic procedures such as the laying of the dinner on the richly carpeted floor and the bedroom with its raised sleeping platform. The stepdaughter has a very beautiful carved wooden wheelchair and how she gets about the house, even with her maid pushing the chair is something of a mystery since there is a grand staircase and a cellar to navigate. The dialogue too is carefully written to include cultural references that might be inaccessible to non-Iranians but none of this matters so much in a film that is so visually rich and which comments on Iranian history and society so directly via those elements borrowed from global cinema. The final sequence of the film is also perfectly handled so that we go back and re-think some of the earlier scenes. In the Q&A, Robin Baker asked the almost unavoidable question about Shakespeare and received the response that indeed the director was interested in Shakespeare and that perhaps this was a version of hamlet with gender reversals? You can probably guess from that remark that all does not end well.

The maid, a central character in a shot presumably from the original publicity prior to restoration

Music, camerawork,  mise en scène, performance all combine to make this a visual treat. The film is still available free, up until 15.00 BST on Tuesday 13 October, on BFI Player in the UK. It was restored in 4K in 2020 by The Film Foundation’s World Cinema Project and Fondazione Cineteca di Bologna from the original 35mm camera and sound negatives at L’Image Retrouvée laboratory (Paris) in collaboration with Mohammad Reza Aslani and Gita Aslani Shahrestani. Presumably this will later become available for wider distribution and cinema screenings. Do look out for it. On a big cinema screen this should look amazing.