Miguel is taken for ‘a few beers’ by his new boss

This year’s ¡Viva! festival at HOME in Manchester had to be curtailed in March when the pandemic erupted in the UK. HOME’s cinemas are now open again and the festival concluded during September. I’m still not feeling able to travel to cinemas but thanks to the festival, I’ve still got some screeners left to watch. I’ve so much enjoyed the festival over the last few years and I’ve missed the festival experience very much this time round so it’s great to have this opportunity to see some of the films.

Beyond the Mountain is a début fiction film by writer-director David R. Romay after a number of celebrated documentaries for cinema and TV with some high profile collaborators. This new film is billed as a ‘thriller’ and a ‘drama’. It’s actually quite difficult to categorise. An opening scene sees a new father leaving a maternity ward without looking in on his wife and baby son. ’18 Years Later’ we meet the boy ‘Miguel’, now grown up, and earning a living in an agency where he types letters for people with poor writing skills. He’s attracted to one of his clients, Carmela, who sends letters to her boyfriend in the north. Miguel’s mother has never really come to terms with her husband’s abrupt departure and one day Miguel comes home to find her dead, clutching a letter to his father. He decides to try and find his father, packing a pistol he finds in a drawer with some ammunition.

Over 18 years the father, Arturo, has moved around and is now in Ciudad Juárez, the city in Chihuahua on the border with Texas and facing El Paso across the Rio Grande. The city has had a terrible reputation for violence between drug cartels but in this narrative it is remarkably quiet. Miguel is able to track down Arturo and also meets up with Carmela, who is not with her boyfriend (Miguel’s letters to him were colder than those she dictated). Although Miguel finds Arturo (Gustavo Sánchez Parra), he doesn’t declare himself as Arturo’s son. The final actions of the narrative reveal, but do not directly explain, what has happened. I won’t spoil that reveal.

What is the role of Carmela (Renée Sabina) in Miguel’s mission?

This is a relatively short film (around 90 minutes) that unrolls at a slow pace. It is beautifully shot in ‘Scope compositions and the final section on the border is particularly striking, reminding me in many ways of the Hollywood film Hud (1963) shot just on the other side of the border and which, now that I think about it, has some other shared elements. But though the strong aesthetic engages, the narrative requires equally strong performances to sustain it. Benny Emmanuel as Miguel is in virtually every scene and he adopts an almost anti-‘acting’ stance, looking down and taking his time to speak. He’s a good-looking young man but short and boyish, looking younger than 18. IMDb informs me that I must have seen him as a child in Sin Nombre (Mexico-US 2009). Since then he has appeared in various TV shows and films but is perhaps best known in Mexico for his social media presence, especially as co-host of a popular YouTube channel. He does well here. This is a masculine narrative about fathers and sons. It is worth noting that on his journey of ‘discovery’ Miguel is helped by two older men, one who knew his father and the other, José (Enrique Arreola), a man who offers him a job, who is simply friendly and generous. But I must agree with one reviewer that the narrative fails to develop the character of Carmela (Renée Sabina) enough. I do wonder what function her character is supposed to have in the narrative? Perhaps she had expected to find her boyfriend and cross the border into the US? I also wonder whether the narrative as a whole is a critique of Mexican men’s failure to express feelings and emotions? I understand that fathers abandoning their families is a significant problem in Mexico. 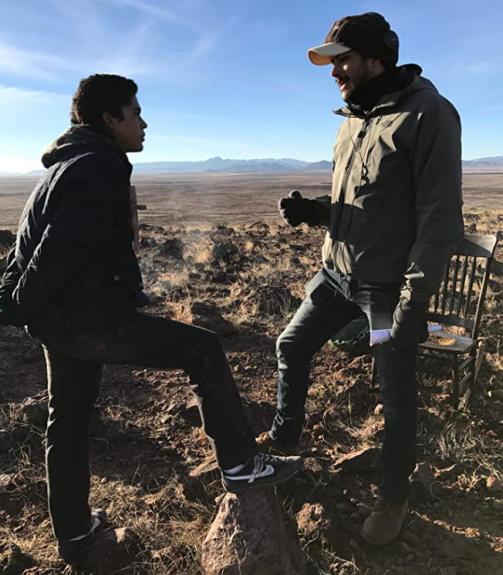 To return to the categorisation of this film, I’m not sure describing it as a thriller is helpful. Certainly it is tense for much of the time as we fear for what will happen to Miguel or what he might do. Perhaps it is more of a mystery drama? Presumably the mountain is a metaphor for Arturo’s story and Miguel has to seek what is on the other side? I enjoyed watching the film but I would have enjoyed it more on the big screen – and I’m sorry I had to miss the festival introduction by Andy Willis.