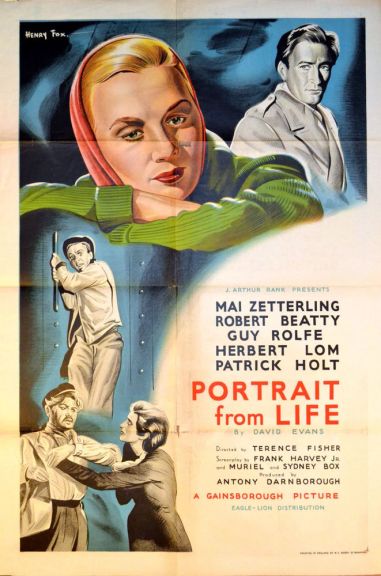 This was the first film under Mai Zetterling’s seven-year contract with Rank. I was delighted to find it being shown on Talking Pictures TV since Ms Zetterling’s career is one of my possible future projects. She started as a film actor when still at the National Theatre School in Stockholm as a teenager and her first film role was in Torment (Sweden 1944) written by Ingmar Bergman and directed by Alf Sjöberg. More Swedish films followed including one directed by Bergman, but in 1947 she appeared in the titular role in Frieda, the Ealing Studios melodrama about a young German woman brought back to England by an RAF officer (David Farrar). Frieda was a prestigious production directed by Basil Dearden who had travelled to Stockholm to see Mai Zetterling in 1945.

A Rank publicity photo of Mai Zetterling from the late 1940s.

Portrait from Life was released in the UK in January 1949. Confusingly it had at least two other titles. In the US I think it was called The Girl in the Painting or The Lost Daughter and it had various titles in different European territories. Mai Zetterling was not happy because her role was so similar to that in Frieda. She was again a young German woman, this time in a ‘Displacement Camp’ in Germany in the British Zone after 1945. There is a theory that audiences might not have accepted a German actor in the lead for these films. Zetterling worried about typecasting – though her first Gainsborough role had been a few months earlier in one of the Somerset Maugham stories in Quartet in which she plays a wealthy young woman in a Monte Carlo casino. Portrait from Life begins with a British Major (Guy Rolfe) back in London on leave only to discover he has been jilted by his girlfriend. Taking refuge in an art gallery he is transfixed by a painting of a young woman named Hildegarde. He is joined by an older man who is similarly transfixed and claims that the girl is his daughter he was forced to leave behind in Austria when he escaped the Nazis. But he claims the girl’s name is Lydia. Major Lawrence and Professor Menzel (Arnold Marlé) discover that the painting was submitted to the exhibition by a Canadian artist (Robert Beatty) who visited a camp in Germany while still serving in the forces. But Lawrence and the Professor aren’t going to get any more information from him. Lawrence returns to Hanover but still has leave owing and gets permission to visit the various camps looking for the girl. When he eventually finds her a series of flashbacks are required to explain how the portrait came about. A dramatic finale ensues.

A studio promo photo, the actual scene has back projection of the woods around the camp. Robert Beatty is the artist.

There are several interesting aspects of the film’s production. It was directed by a young Terence Fisher – his third feature as a director after a career as a film editor in the 1930s. Fisher would go on to become a celebrated director at Hammer Films with many horror film credits. He makes a decent fist of this film. The film was mainly shot in Gainsborough’s small Islington studio with some location footage in Germany and a visit to a displaced persons camp in the South of England. Scattered throughout the cast are a number of familiar faces in small parts – Thora Hird, Sam Kydd, Pete Murray, Donald Sinden and a young Anthony Steel all appear. The other leading cast members include Patrick Holt and Herbert Lom as the man in the camp masquerading as Lydia’s father. There were in fact several actors in the cast who were German-speaking and the film does feature both English and German dialogue quite convincingly. I do wonder if this was more common in films in the immediate post-war period. 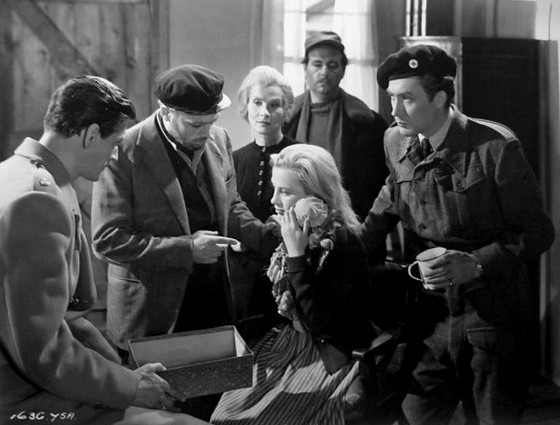 From left, Guy Rolfe, Herbert Lom, Mai Zetterling with the doll and Patrick Holt in the foreground

The film received a good mini review in Film Review of 1949 and in David Quinlan’s British Sound Films. Despite Mai Zetterling’s worries about being typecast, she became popular with British audiences. I’ve seen a review suggesting that the dramatic final scenes overwhelm the detailed investigation that went before. I don’t agree with this. I think that David Evans’ original story and the script developed by Muriel and Sydney Box and Frank Harvey manage to offer an insight into the long and difficult process of dealing with displacement and that the drama probably matched what happened in some cases. Perhaps it is exaggerated but it doesn’t derail the narrative.