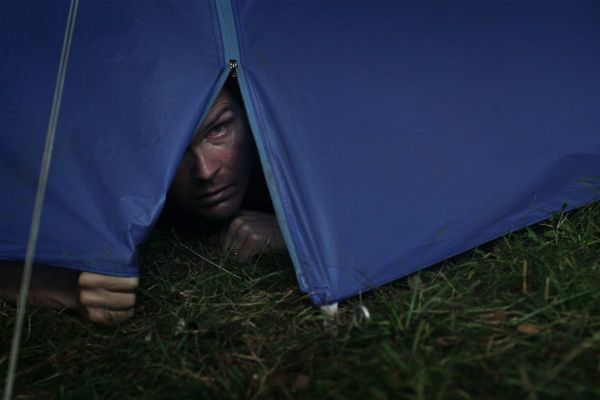 Apparently writer-director Johannes Nyholm asked journalists not to reveal the plot in their coverage of the film however it is very difficult to write about the film without giving away details so go and see the film (though it’s not due to be released in the UK until February) before you read this as spoilers abound.

This is the second film I’ve seen recently that deals with parental grief at the loss of a child; the other was The Broken Circle Breakdown (Belgium-Netherlands, 2012). The latter dealt with the trauma in a realist fashion using melodrama to articulate the emotional pain. The milieux of that film, a country band, gave plenty of opportunity for music, which was superbly done. Koko-di Koko-da uses horror as a vehicle to articulate grief; early in the film a character references Freddie from The Nightmare on Elm Street series as a clue to understand the recurring (apparently) dream narratives the protagonists suffer. There’s also an element of Run Lola Run (Lola rennt, Germany 1998) in the repeating narrative; whilst Lola relived her trauma three times, the six experienced here felt excessive until the denouement. Koko-di uses an arthouse narrative technique where the end of the film throws into focus what’s gone before and there’s an epiphany. I won’t spoil what that is.

The ghouls are Grimm fairy tale type characters that are truly unsettling; they appear to be products of Nyholm’s imagination but have a convincing ‘collective consciousness’ quality to them. They are brilliant bogeymen. Of course, these tales are primarily aimed at children but the context here is entirely adult as the nightmare of a child’s death is brilliantly staged at the start. The bulk of the film is three years later when the couple are camping and end up in the woods. The cyclical nature, the vicious circle, of grief is brilliantly articulated by the repetition of their nightmare. In The Broken Circle Breakdown the narrative is a spiral down and expresses anger at the American ban of gene cell therapy, which may have saved the child. Hence, the American music context of the film: Johan Heldenbergh’s Didier loves the country but rails against Bush’s relgious convictions that prevent research.

Koko-di isn’t situated in a particular time and place, though the Nordic woods are particularly spooky with the bleached-out light, and is more effective for it. The pain has a universal quality that intensifies the nightmare and it’s clear that suffering the death of a child is likely to get you waking up screaming.