Eating durian with their fingers . . . in the classroom

Writer-director Anthony Chen from Singapore has been living in London for ten years and he was present to introduce his film and then to offer a Q&A (which I had to leave after around 20 minutes to get to my next screening). Chen’s first film Ilo Ilo (Singapore 2013) won the Sutherland Prize for a ‘First Feature’ at LFF in 2013. The director explained that he had been involved in two other productions (as a writer and producer for his jointly-owned company Giraffe Pictures) since 2013, but also he needed a long time to make his own films because he is so concerned with the details of location, casting and production design.

Perhaps the most surprising aspect of this fascinating film is that the two principal characters are played by two of the leads from the earlier film, even though initially the director had been determined not to cast them. This isn’t such a minor point as will become apparent after a discussion about the plot outline. Yeo Yann Yann, the mother in the first film, now plays another woman in an unhappy marriage, but now she is a teacher in an English-medium high school (where students take a form of the traditional British O levels, still available internationally). This character, ‘Mrs Ling’, is under pressure in three ways. As a wife she has been undergoing intensive IVF procedures but has ‘failed’ after several years to become pregnant. She is also a migrant from Malaysia, married to a Singaporean man, and finally she is a teacher of Mandarin – a subject that is sidelined in a high school which is resolutely focused on English and Maths. Add to this that she has become the main carer of her father-in-law who is severely disabled and requires intensive personal care. A carer is with him during the school-day but it is Ling who must cope at all other times. Ling is determined to secure her place as a Mandarin teacher by improving her students’ grades and she organises a post-school remedial class. It quickly becomes apparent that only one boy, Wei-lun (Koh Jia Ler, the 10 year-old from Ilo Ilo, now a strapping 16 year-old), is prepared to take it seriously. When the other boys drift away, Wei-lun stays, citing his parents’ wish that he learns Mandarin to be able to ‘do business’ in China when he grows up. 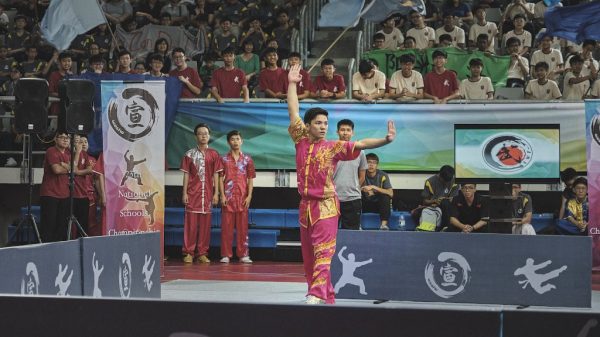 Wei-lun competes in a wushu event

As the relationship between Wei-lun and his teacher develops in this ‘after-school’ time, it becomes apparent that they are two lonely people who need each other and that makes them feel validated. (Wei-lun’s parents are away much of the time.) Later Ling will introduce Wei-lun to her father-in-law and the pair will bond over a love of martial arts. I won’t spoil the plot but you will guess where all of this is heading. What I do want to do is to discuss the film as a melodrama. Compared to relatively restrained Ilo Ilo, which I haven’t seen for a few years, this new film feels like a full-blown melodrama. I love melodramas and this was, for me, a successful film, but from the few reviews I’ve seen so far (mostly North American), it will suffer in the West because of melodrama’s poor reputation with contemporary audiences. But not here for me.

The starting point of the film is the winter monsoon season, when rain is torrential. In melodrama, rain is often associated with sexual desire/sexual release. It rains a lot in Singapore and when it rains, it’s heavy rain. Anthony Chen uses rain very effectively but he has other melo possibilities as well and this is where his meticulous attention to detail pays off. I’ll just mention a few instances. One of the key ‘significant objects’ of the narrative is the durian. The durian is a very large and heavy fruit which Ling breaks in two and then she scoops out handfuls of fleshy pulp which she shares with Wei-lun. Durian is native to Borneo and Sumatra and is imported into Singapore from Malaysia. In this sense it is like Ling herself. But the fruit is also divisive. While many love the fruit, many others think it has the most disgusting smell of any fruit. In Singapore there are shops and stalls devoted to the fruit but it is also banned from the transit system and many hotels because the smell is said to linger. The symbolic value of the image of eating durian should be clear (see the image of Ling and Wei-lun eating at the head of this blog post and in the clip below).

A second sequence involves Wei-lun taking part in a wushu contest – a display of a distinct form of martial arts movements. Anthony Chen told us that Koh Jia Ler had been interested in this activity as a young boy but now he trained intensively for several weeks to get to the standard necessary to win a gold medal in a national schools competition. Ling and her father-in-law support his performance. Finally, to emphasise the importance of location, Chen has two key scenes in which we see Ling and her banker husband Andrew each in their ‘natural habitats’. Andrew (Christopher Lee who is ironically Malaysian) is shown in Singapore’s financial district where the tall buildings are linked by green walkways. Ling is shown at one point in her home environment in rural Malaysia – a quieter, calmer and more organic environment. Chen told us the house in Malaysia took him a long time to find. (Yeo Yan Yan was also born in Malaysia.)

On the bus together

Yeo Yan Yan wore a wig for the part of Mrs Ling and Chen dresses her in what seemed to me to be fairly dowdy outfits with rather shapeless skirts and clumpy shoes for her teacher role. She comes across as an attractive woman who has lost interest in her appearance, which perhaps helps the idea that the confused Wei-lun sees her as both a teenage boy’s idea of an ‘older woman’ and a maternal figure. It’s an interesting and potentially disturbing basis for a student-teacher relationship. My impression is that as the narrative progresses her costumes become slightly less dowdy. As a melodrama with a woman at its centre, the other notable feature is that Ling doesn’t seem to have a close female friend but then the more I think about the film as a melodrama, the more interesting it gets. I need to see it again. At the moment, I don’t think that the film has a UK distribution deal in place. It is scheduled for release in Singapore in November and I think it may do well in Asia generally. The two leads are very good and the UK DoP Sam Care does a great job with director Chen’s careful selection of locations.