The family briefly back together – on a train (this is Japan!). Ryota (Abe Hiroshi), Shingo (Yoshizawa Taiyô) and Kyoko (Maki Yoko).

Kore-eda Hirokazu is a Japanese auteur in the original sense of that term. In his films you can rely on recurring faces in the cast list, recurring themes and styles – all with a sense of a director’s ‘personal vision’ honed over twenty years of auteur production. Very occasionally, Kore-eda throws a curve ball, such as in his film Air Doll in which one character is a blow-up sex toy which comes to life, but even so the film has recognisable elements. After the Storm does have a slightly different feel in the character written by Kore-eda for one of his regulars Abe Hiroshi, but overall the narrative is familiar and has a direct relationship to Kore-eda’s 2008 masterpiece Still Walking, sharing both Abe and Kirin Kiki as his mother in both films.

Whenever a Kore-eda film appears, there are reviews that reference the Japanese master Ozu Yasijuro and in After the Storm there are several scenes featuring Japanese sporting/cultural pursuits such as cycle racing, baseball, pachinko and lottery tickets – the kind of activities that Ozu’s characters sometimes engage with. However, the way in which these activities form part of the narrative reminded me more of Kitano Takeshi or some of the Japanese New Wave films of the early 1960s. The ‘master’ Kore-eda usually refers to is Naruse Mikio and in an interview with Mark Schilling for the Japan Times, he does so again in discussing After the Storm. Naruse’s characters tend to come from the next social class below those of Ozu – they are in Kore-eda’s words ” . . . living with their backs bent. They aren’t standing straight and tall”. This is the shomin-geki in Japanese cinema, the film about ‘ordinary people’ (the lower middle-class/upper working-class).

Ryota brings a cake for his mother (Kiki Kirin )

The film’s narrative is based on Kore-eda’s own background. He wrote the script himself and its central location is the public housing complex or danchi where Kore-eda himself grew up. The film opens in the flat of Shinoda Yoshiko (Kiki Kirin), where she and her adult daughter Chinatsu (Kobayashi Satomi) are writing ‘thank you’ cards after the funeral of Yoshiko’s husband. A little later her adult son Ryota (Abe Hiroshi) visits his mother’s flat, bringing her a cake but hoping to rummage around and find anything valuable his father may have hidden. Ryota is a familiar figure in many films – the ‘man-child’ who has never quite grown up and who now in his early 50s is always broke and scrounging for whatever he can find. He once wrote a novel and won a prize but now his only source of income is as a seedy private detective following adulterous wives and husbands or looking for lost cats. Even in this job Ryota has to ‘play’ the system and in effect syphon off some of the client fees which he won’t declare to his employer. He needs the money partly to support a gambling addiction inherited from his father. All of this makes Ryota a slightly different character from Kore-eda’s recent family drama personnel. He allows the introduction of jokes and comic scenes as well as the wiff of something possibly dangerous. 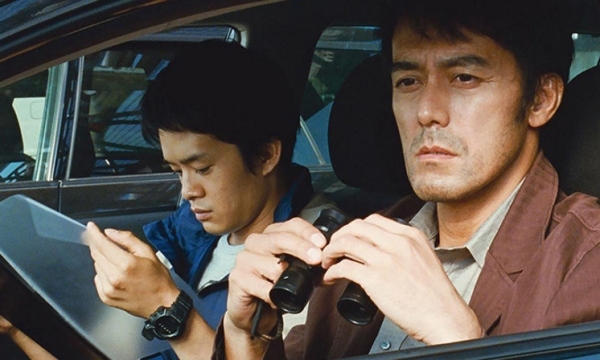 Ryota’s other problem is that his ‘failure’ to earn money has led to divorce by his wife Kyoko (Maki Yoko) and only monthly access to his son Shingo (Yoshizawa Taiyô). The scenes away from mum’s flat see Ryota working with a junior partner and then spying on Kyoko when she is with with Shingo and her new partner. Ryota then meets his son for their monthly outing before father and son visit his mother’s flat and Kyoko (still waiting for her child support payment from Ryota) is persuaded to join them. The final section of the film then presents the three generations together for the night as Typhoon #24 of the summer is unleashed.

One perceptive reviewer remarked that in Kore-eda’s films it often feels as if nothing has happened until you realise that everything has happened. I agree. What is also surprising is that the more ‘Japanese’ the film gets, the more universal it feels. At one point grandma points out that the best meals improve if the food is left overnight to allow the flavour to develop. As all good cooks know this is absolutely correct. The focus on (home-cooked) food is another link to Still Walking. The other point I’d like to make is how well I think Abe Hiroshimi plays his role. It’s not easy for the very handsome 6″ 4′ Abe to play the seedy failure but somehow he manages to be a klutz but also very likeable. His pairing with 5″ 1′ Maki Yoko is also quite something. She is very beautiful and the family together is a winning combination. Kiki Kirin is wonderful – as she always is.

Kore-eda Hirokazu is now, for me, the most reliable auteur filmmaker in contemporary cinema. Every one of his films has been a winner. There have been several reports of Spielberg attempting to remake Kore-eda films. I fervently hope this never happens. Let’s just enjoy Kore-eda’s films as they are – perfection.