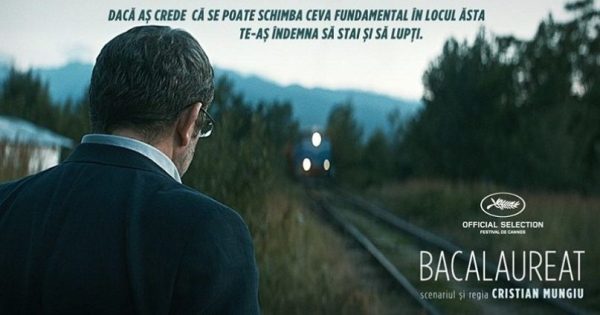 After the all too common long wait, the UK finally got this 2016 Cannes prizewinner (shared Best Director for Cristian Mungiu) at the end of March 2017. It was worth the wait. I have only a fleeting acquaintance with Mungiu and the rest of the ‘Romanian New Wave’ of the last ten years or so, but I recognised the basic elements of this type of film – a single setting and a group of interlinked characters involved in relatively routine actions. The skill comes in scripting the scenes in such a way to build a strong central narrative ‘line’ while layering the narrative with several different forms of commentary.

The first thing I noted was that this is a co-production with France and Belgium – ‘Why Not Productions’ and the Dardenne Brothers’ company ‘Les Films du Fleuve’. Both companies work with Ken Loach and other leading filmmakers such as Jacques Audiard. Romanian films need this kind of outlet. Although Graduation was the third best performing Romanian film at Romanian box office, it was still only able to take €145,000. Romanians are not very interested in their own cinema. Directors like Mingiu must sell their films in the international market and therefore the films must have universal elements in their stories – or their local stories must appeal to international viewers.

The ‘inciting incident’ in the narrative for Graduation is an attack on a young woman one morning on her way to school. Eliza (Maria-Victoria Dragus) has a lift to school from her father but stops in a small building site expecting to meet her boyfriend (who is late). Slightly injured and shaken up by the attack (which we don’t see), she is hindered in her preparations for her final exams at school where she is an ‘A’ student – but otherwise this could be a disturbing and unfortunate incident but nothing more. But Eliza’s father Romeo (Adrian Titieni) is a surgeon at the local hospital and he seems even more upset than Eliza. He has invested a great deal in Eliza’s education and now she must get high grades to win a scholarship at a ‘prestigious university’ in London. He isn’t prepared to see her fail. 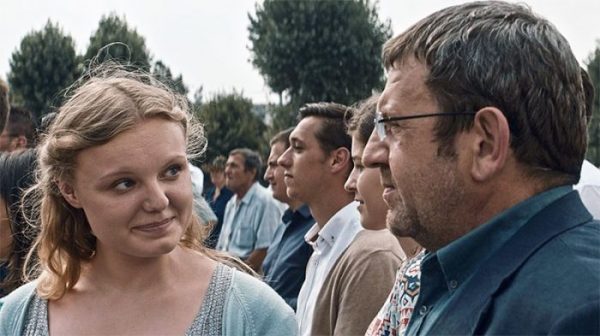 Romeo believes himself to be a man of principle and honour and he despises what he sees as the disease of corruption in Romanian society. But he is also aware how things work in Romania and he can’t stop himself trying to do his utmost for his daughter. He starts by trying to get her more time to finish her exams (she now has a bandaged wrist) but soon finds that he could exert more pressure to ensure she gets the grades she needs. The narrative is set in Romania’s second city, Cluj in the Carpathian mountains, but we don’t see much of this large city, just a few streets and public buildings and on one occasion the grassy top of the ski jump in summer where the police are conducting a search for Eliza’s attacker. Romeo is there because the police officer in charge is one of his old school friends and a source of advice on how to play the system. Reading reviews, I can see that this focus on corruption is read by most critics in relation to the inability of a generation of Romanians to free themselves from the culture of survival under the Ceaușescu regime in the 1970s and 1980s. I can certainly see this, but I don’t think viewers in other societies should be quite so judgemental – similar systems operate in many parts of the world. Which school you went to and who you know is not at all unhelpful in getting access to many things in the UK. 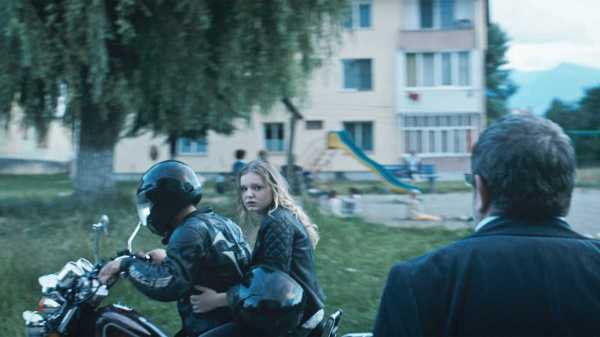 Romeo watches Eliza ride off with her boyfriend

Mungiu develops the narrative slowly. It’s almost like a web made up of the surgeon’s interactions with a diverse group of people. Romeo is gradually trapped in the web and his secrets are exposed. Questions are posed about several characters, many of whom are inter-related in different ways. About halfway through the film I thought to myself, “This is enjoyable and well done, but I’ve seen the like before”. Then Mungiu started to up his game and bring in more elements. For a UK viewer the London connection is ironic – Romeo declares that Eliza will be so much better off in London (where women aren’t attacked in the street!) and where there is no corruption (another misconception?). We also might wonder whether a bright young woman like Eliza shouldn’t stay and help to build the new Romania. But mostly, I think, we are concerned about what is happening to Romeo (and to his depressed wife, Magda (Lia Bugnar) and his elderly mother – there is a family melodrama of sorts in the mix). Some of the questions posed by the narrative are answered, some are left open. It’s quite a long film (128 minutes) but it is always engaging and in many parts gripping. This is what I consider to be ‘quality cinema’ – entertaining and thought-provoking. The script by Mungiu and his direction of excellent performances by his cast are tight and efficient. I hope he finds his audiences. As of the first week of April, Graduation had made approx. €1.6 million in Europe as a whole.