Keith reported on Sunset Song after its inclusion in the Leeds Film Festival. Seeing it now on general release, I recognise several of the points he raises and it is certainly a ‘flawed’ film in several respects. However, as Keith suggests, as a Terence Davies fan I find much to admire. I haven’t read the novel(s) (A Scots Quair Trilogy) by Lewis Grassic Gibbon, but I’ve done my research and some interesting issues arise that are worth discussing. Sunset Song is the first and most widely praised (and presumably most widely read) of the three novels written in the early 1930s when Gibbon (real name James Leslie Mitchell) was in exile in Welwyn Garden City where he died just short of 34 years old in 1935. Although the film is relatively long at 135 minutes, Davies, as his own adapter, has cut several characters and attendant narrative lines from the central story – which will/has alienated some fans of the novel (a novel seen as central in the canon of Scots literature).

One of Keith’s main reservations was that the film does not deal sufficiently with the two central themes of the modernisation of the rural economy/agriculture in the 1900s and the socialist politics of some of the characters. Unfortunately, the screening I attended had sound problems for the first ten minutes and I couldn’t follow some of the dialogue. I think I missed some of the arguments around education. Chris, the central character played Agyness Deyn is a bright young woman, encouraged by her otherwise brutal father (Peter Mullan) to become a teacher. But I suspect Keith has a valid point about the politics in the novel that doesn’t get much of a mention in the film. Davies is not really interested in politics. However, I disagree about the importance of the land, especially to Chris. There is a distinct discourse about the land and what it means to her. I was also struck by some of the similarities between the narrative and Thomas Hardy’s novels such as Far From the Madding Crowd and Tess of the D’Urbevilles. Unlike Hardy’s fictional ‘Wessex’ a few decades earlier however, the similarly fictional Kinraddie Estate in The Mearns inland from Stonehaven does have access to the railway but the claims to mechanised farming seem less secure. I did though find one scene particularly symbolic when Chris’s father has a stroke while he is in the process of preparing a cart to receive a horse. It is almost as if he is the horse being felled.

The issue about Davies’s adaptation is that this isn’t a ‘filmic version of the book’, but instead it is another auterist work by the creator of Distant Voices, Still Lives (1988) and succeeding melodramas, usually focusing on central female characters (often as witnessed by the young Davies himself). Distant Voices includes some of the most stunning and disturbing scenes I’ve ever seen on a cinema screen and the same approach is taken here for many of the domestic scenes. The static camera views various tableaux head on. During a wake the assembled male mourners are gathered around a table and then we look through a doorway to see the women in a separate room, further back from the camera with shafts of light creating dark shadows around them. These are images like old Dutch paintings and from interviews we know that Vermeer is a favourite for Davies. But he also tells us about a Danish painter Vilhelm Hammershøi (1864-1916) whose work on interiors was introduced to Davies and his cinematographer Michael McDonough by production designer Andy Harris. At this point I should say that one of the great achievements of the production is the way in which Davies and his production crew have managed to bring together three completely different production set-ups and meld them into a single coherent visual narrative. Keith suggested that: “It was shot on film but the transfer to a DCP is very good”. I need to correct and amplify that statement.

Chris in the wash-house

I think I’m correct in saying that in contemporary filmmaking, the original footage, whether it on film or digital, is first processed to create a ‘Digital Intermediate’ which is used for post-production. When this is complete, the print for projection is created, usually now via a digital master copy which is used to create a DCP, Blu-ray, DVD etc. In a sense, all films, even those that started on celluloid will be ‘digital’ at some point. For Sunset Song, the production went first to New Zealand for the summer harvest scenes which were shot by McDonough on 65mm film using an Arriflex 765 camera. 65mm gave McDonough the chance to film in very deep focus. There were just four days in New Zealand, followed by twenty days in a studio in Luxembourg for the interiors that were shot digitally on the Alexa XT Studio. Finally the production moved to Scotland to Gibbon/Mitchell’s chosen location for the fictional Kinraddie and completed the shoot after thirteen more days, combining 65mm film and digital for both exteriors and interiors. McDonough (a Scot trained in the US whose best-known film work is perhaps on Winter’s Bone) explains how he ‘matched’ the film and digital sequences in an interview for the ARRI Rental website. He also spoke about what Davies wanted in terms of visual style:

Terence has a very precise style. His frames are classically composed and he loves the camera to flow – to move elegantly and always with a clear justification. I knew going in that there would be no Steadicam or handheld shots; this would be classically lensed with tripod, dolly and crane. Our production designer, Andy Harris, had introduced the idea of taking the paintings of Danish artist Vilhelm Hammershøi as our main inspiration for the look of Sunset Song. The paintings are illuminated by a soft, directional, northern light; there was a coolness to them that suited our Scottish setting perfectly. The only variation from this was the summer harvest scenes, which were much warmer and more romantic in tone.

Shooting in New Zealand (from the ARRI Rental website) 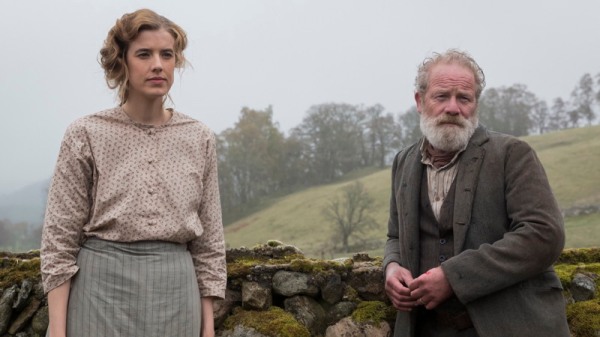 Agyness Deyn as Chris and Peter Mullan as her father. This promotional image is presumably from the Scottish shoot.

Sunset Song used the latest anamorphic lenses for a ‘Scope presentation and the care taken in the visual style means you should try to see this on the biggest screen possible. Unfortunately, I don’t think that the audience looking for a literary adaptation or for a straightforward romance or drama will recognise the artistry of the presentation. The film has received a number of negative reviews and it may be that it will attempt to find its audience on TV and video which will struggle to show it in all its glory. I’ve already indicated that I think the adaptation is flawed. For me the final part of the film that refers to what happens to Ewan (Kevin Guthrie) when he enlists in the Great War just doesn’t work. I’ve read what Davies says in interviews and his logic and arguments are sound but it didn’t make sense to me on a first viewing. It felt to me that the ending had been foreshortened and the events didn’t seem to go together – the timescale seemed wrong.

The other criticisms of the film seem unwarranted. Inevitably there are arguments about ‘authenticity’ of accents etc. There are some local actors, specifically Ian Pirie as Chae, but many of the Scots are from the West Coast (Mullan, Guthrie and Daniela Nardini as Mrs Guthrie). I’ve seen some comments from North East Scotland both pro and anti. But of course it’s the casting of Agyness Deyn which is most controversial. Ms Deyn is a Lancashire lass and she makes a brave stab at the local accent but to see how far off she sometimes gets (especially in her voiceover narration) just go to the 1971 BBC TV serial of the books on YouTube (mind you, I don’t know how authentic that is!). Does it matter? Not at all for me. I was very impressed with Agyness Deyn. I’d never seen her before and I thought she moved well, used her modelling training and conveyed her spirit through her sparkling eyes. Most of all she conveyed what I take Terence Davies to have wanted from his heroine – which is all that matters really. I enjoyed all the other performances as well – although I do understand why many audiences might be tired of yet another angry and violent man portrayed by Peter Mullan. I feel that I do have to mention the pairing of Agyness Deyn and Kevin Guthrie. I like Kevin Guthrie but he is shorter than his co-star (as was the case in Sunshine on Leith as well). I can’t work out if Davies thought that having Chris taller than Ewan said something in terms of the narrative or whether the height difference is irrelevant – but it is there and I increasingly find casting decisions interesting. 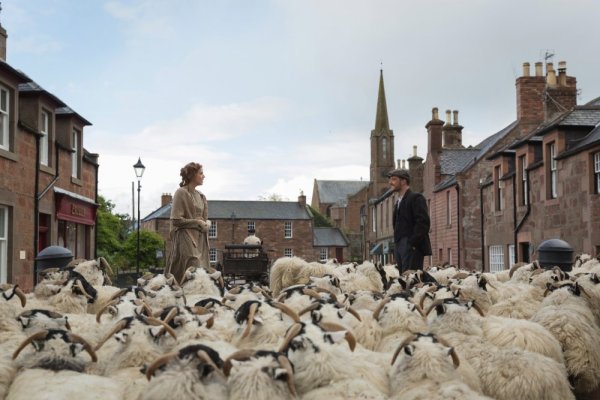 Chris and Ewan meet in the village square before their banns are read.

I’m not going to attempt to deal with the music and the singing in the film, even though they are a crucial element in any Terence Davies film. The choice of songs – and versions of the songs has been quite controversial, but information on the soundtrack is difficult to find. I need to see the film a few more times. But to go back to Keith’s review, he mentions the Glasgow Orpheus Choir (I’m assuming it’s them singing ‘All in the April Evening’ during a sequence in which the villagers ‘flock’ to the church). This is a good example of Davies creating an image that doesn’t refer to realism. People would not trample through the barley field as depicted in the film and it is very strange to have the scene in the church with the choir singing. Is it diegetic or non-diegetic? I kept wondering if the choir would emerge from the shadows at the back of the church. My knowledge of Scottish religious practice is limited and didn’t allow me to recognise what kind of church it was. But I don’t go to a Terence Davies film for authenticity, I go for art.

Sunset Song is absolutely worth seeing on a big screen and some of the points discussed above are illustrated in the trailer: