One of the disturbing sights facing the protagonist in THE SHADOW WITHIN. Is that a noose fashioned by the child or is he attempting to set up a swing? (from http://rozmon.blogspot.co.uk)

The third Nomura film at BIFF marks something of a change in style, though the narrative content, still based on a Matsumoto story, remains consistent. The colour 16mm Scope print was less buckled but the colour had faded badly. Unfortunately this film includes some flashback footage that is subject to various visual effects and they seem to have deteriorated more than the rest of the film creating some very odd images. More disturbing for me is the soundtrack now featuring what Festival Director Tom Vincent referred to as enka music. I don’t have the knowledge and experience to discuss this Japanese popular music form of the 1970s, but I’m usually happier with orchestral classical/jazz scores. I think Tom referred to ‘lounge music’ but that was a much later term in Western music – perhaps it originated in Japan?

1970 marks a high point when Japan was more affluent and more comfortable with ‘Japaneseness’ than in the first decades after the war. It was the year of the Osaka Expo and just six years on from the Tokyo Olympiad. Japan was now on a par with many developed countries and the future looked good. Only three years later the oil crisis would temper economic growth but the economy would continue to grow again from the late 1970s. Society too was changing and gradually ‘modernising’. However, the film industry was in crisis with the major studios losing money and smaller independents gaining ground alongside foreign imports (mostly from Hollywood). One impact on the traditional crime melodramas that were Nomura’s focus is the depiction of overt sexual activity. By 1970 the so-called pinku eiga or ‘pink films’ were beginning to establish soft porn as a major genre/mode in Japanese cinema. This doesn’t mean that The Shadow Within is soft porn – far from it –but we do see the central couple in bed making passionate love, mainly under the sheets and in some shots showing much more skin than would have been possible in mainstream Japanese genres in 1961, the date of the earlier Nomura title that we watched. 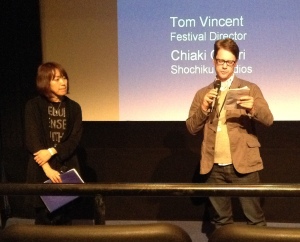 Tom Vincent and Chiaki Omori of Shochiku International gave an introduction to the film and the work of Nomura and Matsumoto before each of the last four films.

The Shadow Within is a film about adultery and the difficulties faced by single parents attempting new relationships. However, unlike the earlier two Nomura films the narrative here focuses on the man as the ‘active’ player in the narrative. Now in his thirties, Hamajima Yukio (Katô Gô) is what I assume was seen as a ‘salary man’ in 1970s Japan, though he seems to have some degree of autonomy in running a busy travel agency in Tokyo. He works long hours and doesn’t get much support and comfort at home in the suburbs – where his wife is usually busy with one of her several local business ventures, most of which seem to involve her female friends invading the house. There might be an interesting narrative about the newly entrepreneurial woman here but that isn’t what concerns Matsumoto and Nomura. The couple is childless and outside of work Yukio doesn’t have any interests. One day, on the bus home, he spots a woman he thinks he knows and when they eventually speak he realises that they were at school together. Teiko (Iwashita Shima) is now a widow with a small son and it isn’t long before Yukio is invited to her house to meet the 6 year-old son, Ken. As in many Japanese films, little is said about childcare for the boy (is he at home on his own all day?), but as their relationship develops Yukio begins to visit the house before Teiko gets home and he looks after the boy when the child’s mother is kept out late selling insurance.

The central section of the narrative shows the developing relationship. Yukio spends more and more time with Teiko and her son – his own wife is seemingly too busy to notice. But gradually, Yukio begins to get the feeling that the boy resents him. This sounds like a conventional melodrama development but Nomura manages to develop the story in several interesting ways. The child playing the son is distinctly creepy, almost like a forerunner of the late 1990s J-horror children and gradually we realise that it is having an effect on Yukio. Is he becoming paranoid or is the child really trying to harm him? Is what we see actually happening or is this Yukio’s imagination? Around this point in the narrative Nomura introduces the flashbacks which show us Yukio as a small boy in a similar situation, living with his single mother when a man joins the family group. The final section of the film then moves into a full-blown psychological family melodrama.

The Shadow Within is a melodrama in which the criminal act which eventually requires police investigation comes from within the family melodrama – i.e. it itself does not ‘drive’ the narrative. The appearance of the police is thus quite brief at the end of the film. Again it’s very difficult not to think of Hitchcock in the final scenes when, during a police interview, we are invited to watch two or three large black crows, seemingly peering in the window. I enjoyed the film as much as the others in the Nomura retrospective and I was very taken by the performance of Iwashita Shima as the woman. Katô Gô as Yukio was able to move from stolid normalcy to become the focus for paranoia as the narrative developed.

Here is the Japanese trailer (no subs) which illustrates several of the style points discussed above (the effects footage, the music, more overt sexual activity etc.):