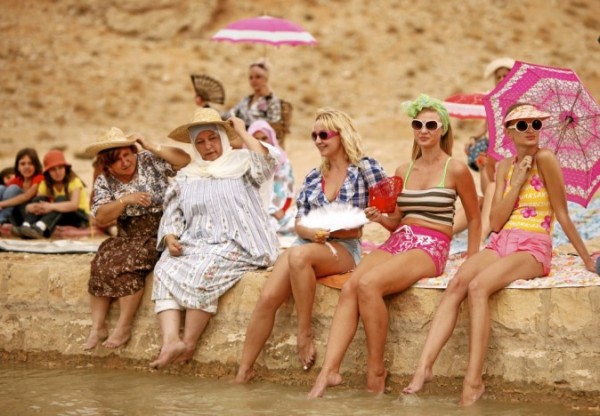 In one of the more surreal moments in 'Where Do We Go Now?', three of the nightclub dancers sit by two of the village women who have engineered their arrival.

The Films From the South Festival opened strongly tonight with a real crowd-pleaser. Heidi Sandberg and Lasse Skagen, the festival’s Managing Director and Artistic Director respectively, opened the ten days of screenings and introduced Nadine Labaki, the director, co-writer and star of Where Do We Go Now? As the final credits rolled Ms Labaki received a deserved standing ovation for a film that will no doubt attract healthy audiences across the world following a highly successful opening in France and Lebanon.

The film’s title is taken from its last line of dialogue. I won’t spoil your enjoyment by explaining it, but in case you might think that a parting shot like this makes the film sound despairing, I hope you will be assured that it’s actually the opposite and filled with hope – while recognising that the problem hasn’t been solved yet.

I’ve been mulling over the various genre descriptions of the film such as ‘musical comedy’ and the inimitable Variety ‘dramedy’. I was surprised that there is a moment of real tragedy in the film. This definitely changes the overall tone of the film, sharpening up the comedy and adding to the real satirical edge which is there in the film underneath all the music and laughter. Where Do We Go Now? is clearly a follow-up to Labaki’s earlier Caramel, but also something ‘bigger’ in cinematic terms. Its use of music helps to propel it away from the more realist tone of the earlier film and towards something more fantastical.

Although most reports set the film in Lebanon, there aren’t any direct references to that country. It could really be set in any relatively isolated community. In this case the village is in the mountains, linked only to civilisation by a narrow track that is heavily mined on either side. The two teenage sons of the shopkeeper take their ‘scooter and trailer’ down the mountain each day to collect supplies. Meanwhile the women visit the village’s twin cemeteries, Christian and Muslim, replacing the flowers on the graves of husbands and sons lost in a civil war between sectarian groups. When the boys set up a new aerial on the hillside it brings both music radio and television channels to the village which gathers to usher in the millennium. But television also seems to bring seeds of discord, partly through the news of what is happening elsewhere in the country and partly through the sexualised imagery which inflames the passions of the men of all ages. Perhaps fittingly, the village women will eventually use sexual allure (in the form of a group of Ukrainian nightclub dancers) as a decoy device in order to prevent the men from reaching the inevitable conclusion of an outbreak of the civil war directly in the village itself – and that’s where the comedy comes in.

In a press interview (see below), Nadine Labaki says that she wanted the film to represent something that could happen in any village threatened by civil conflict of any sort, not just religious. But she does say that she was prompted to make the film when in May 2008, on the day she discovered that she was pregnant, Beirut once again moved into civil war mode:

“And I said to myself, if I had a son, what would I do to prevent him from picking up a gun and going out into the street? How far would I go to stop my child from going to see what’s happening outside and thinking he had to defend his building, his family or his beliefs? The idea for the film grew out of that.”

There are two main differences between this film and Caramel as I see it. The first is the scale of production. With more co-production partners, including support from both Canal + and the Doha Film Institute as well as Pathé (the international sales agents who will also distribute in much of Europe), the film was genuinely international and the budget was forecast as $6.7 million (Variety November 2010). I suspect that is quite large by Lebanese standards. I’m not sure if it was significant in attracting cinematographer Christophe Offenstein (who lensed the two Guillaume Canet Fims, Tell No One and Little White Lies). He certainly makes good use of the CinemaScope frame in the opening musical sequence and creates plenty of excitement in the composite village scenes (which were shot in three different Lebanese villages, one of which has its church and mosque close together). Despite the bigger budget, Labaki decided to stick with her original decision to use non-actors in most roles. I was sure that I’d seen some of the actors before but I was wrong. That’s a tribute I think to Labaki’s skill in moulding the performances of a large cast of non-professionals into such a wonderful ensemble.

The second difference is the injection of what Labaki calls “a mood of fairytale and fable” – via the use of music. I’d like to tell you that she drew on Indian popular cinema or Egyptian melodramas but she told her Cannes interviewer that it was Grease and the Disney animations Snow White and Cinderella that originally inspired her. The music is written by Labaki’s partner Khaled Mouzanar and the writing process is quite an organic part of writing the film. The words are by Tania Saleh and I’d like to listen to the songs again. I do think that the film feels oddly ‘universal’ and I thought of lots of other similar narratives from Greek tragedies and fairy tales to one of my favourite Cuban films, The Waiting List (2000) about a community of travellers trapped in a country bus station who create a kind of utopia. In Nadine Labaki’s film her isolated community in a sense create a fantasy about a world in which people work to avoid wars and to live with difference – now that is a political idea, isn’t it?

Unfortunately I couldn’t make the Q&A or the Press Conference given by Nadine Labaki in Oslo, but I hope to have more luck with the next festival guest, Eric Khoo from Singapore, whose films I’m seeing tomorrow.

Cineuropa ran a piece today on this festival, pointing out that there is a new initiative from Films From the South and the Norwegian Film Institute to set up a ‘South Fund’ encouraging co-productions between filmmakers from the South and Norwegian partners. The Norwegian government has pledged €1.3 million over 5 years and 13 potential projects have been selected for a forum to be held during this festival.