This interesting day was part of the Leeds International Film Festival, funded via the Worldwide Universities Network and organised by a consortium of academics from the White Rose East Asian Centre working through the Mixed Cinema Network. It was hosted by the World Cinemas Centre at Leeds University in the new cinema space in the Institute of Communication Studies. Professor Lúcia Nagib opened the event which was enthusiastically convened by Julian Ross.

The day followed the usual pattern of individual papers followed by brief discussion. At the end there was a panel to discuss programming Japanese films for film festivals and in the early evening a screening of the 1948 film Children of the Beehive (blogged separately).

The objective of the day, as the title indicated, was to break away from the perhaps over-familiar ways of thinking about Japanese Cinema that seem to still be prevalent in the West. There were 10 papers in all with speakers drawn from far and wide and a range of interesting ideas and illuminating research. My only criticism of the day – and it probably derives from my feeble physical and intellectual state on that Saturday – was that 10 was too many and by the second half of the afternoon I began to lose concentration. For that reason, I’ll just pick out some of the papers for detailed comment and leave out two altogether. 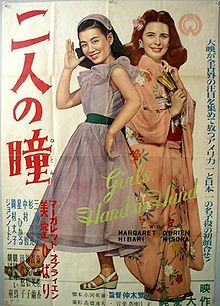 One of the most useful papers for me was Chris Howard’s study of the Head of Daiei, Nagata Masaichi, and his attempts to sell his studio’s films abroad in the early 1950s. The story about Daiei’s success with Rashomon and then with the Mizoguchi jedaigeki is well-known. However, Howard was able to tell us about several of Nagata’s deals and his attempts to sell a range of films, not just those that might be deemed ‘artistic’. (Indeed, the success of Gate of Hell in 1955 was something of a millstone around Nagata’s neck.) There were gendaigeki (contemporary films) such as Futari no hitomi (Girls Hand in Hand, 1952) and exploitation films such as Brooba (Buruba) a Japanese version of Tarzan. Nagata developed reciprocal arrangements with the then ‘independent’ Walt Disney and Samuel Goldwyn companies which were not members of the MPAA and therefore found it difficult to break into Japan. He also made deals with Run Run Shaw in Hong Kong and Pathé in Europe to gain a foothold in a range of markets “from Sweden to Syria” and he tried to sell a 70mm Japanese film in Technirama to overseas buyers in 1962. As Howard suggested, his research demonstrates that Nagata was not so much a ‘self-Orientalising’ producer as a pragmatic businessman. It is still difficult to find the hard data which would help to flesh out some of these ideas and I felt for Chris Howard as he described his dogged attempts to trace the earnings of a Daiei feature week by week through the returns in Variety.

A different kind of ‘cultural exchange’ was explored by Oliver Dew in ‘Zainichi cinema in emergence’. ‘Zainichi‘ refers to the diasporic Korean population in Japan and Dew presented his ideas about how this distinctive cinema began to emerge in the mid 1970s and over twenty years had become both a recognised production category and a critical/discursive category which eventually became institutionalised via essays and festival retrospectives. Dew recognised three distinctive features of this new category – the films were authored by zainichi, they developed representations that overturned notions of ‘victim’ status and they sought and achieved distribution which brought them to mainstream Japanese audiences. This strikes me as really useful work that will help comparative studies of other diasporic communities. 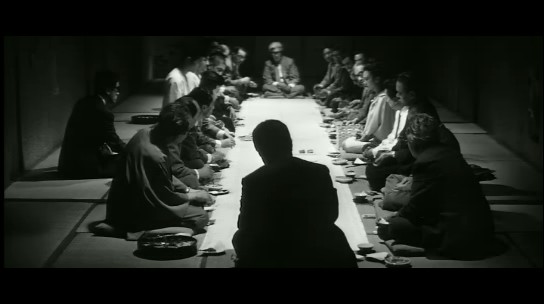 One of the noir images from 'Kawaita hana' (Pale Flower)

Two papers focused in very different ways on specific films from the ‘New Wave’ of the 1960s in Japan. Peter Yacavone discussed the impact of European art cinema (especially Antonioni) and American film noir on Kawaita hana (Pale Flower) directed by Shinoda Masahiro in 1964. I haven’t seen the film, but the clips we saw were enticing. Adam Strickson is a librettist, poet and theatre director working in the School of Performance and Cultural Industries in Leeds. He explained why he had decided to adapt Masumura Yasuzo’s Red Angel (1966) as an opera set in the Civil War in the Sudan in 1991-2. (Red Angel is about a nurse sent to the front line in the Sino-Japanese War in 1937-9). I have seen this film, which I admire very much and this is a fascinating idea. I’m not sure that the time and the resources available allowed Strickson to do exactly what he wanted but he certainly made some interesting observations about Japanese theatre traditions, how these could be traced through the film and what they offered to the opera adaptor.

The third set of papers focused on gender in Japanese Cinema. These included an interesting, but again compressed, account of women in a variety of roles in Japanese Cinema from Jasper Sharp. He discussed the actors and assistant directors who became feature directors later in their careers, other directors who came up through documentary or worked in the arthouse/independent and exploitation sectors. He also explored the role of women as curators and festival organisers and as producers and distributors. Some of this proved to be surprisingly controversial when discussion covered the recent work of Kawase Naomi (see below). Alejandra Armendariz discussed two recent films written and directed by women, Sex Is No Laughing Matter, dir Iguchi Nami 2008 and Moon and Cherry, dir Tanada Yuki, 2004. These films offer the possibility of changing representations of gender positions on sex and the experience of love, in which the stereotypes of active and passive roles for men and women appear to be reversed. There were some interesting observations here and it’s frustrating not to be able to see the whole films. 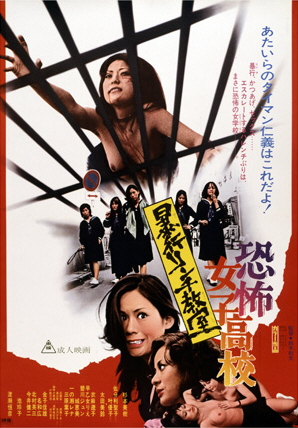 Possibly the most interesting of the gender papers was (because the films seem to circulate, at least in North America, was Alicia Kozma’s ‘Pinky Violence: Shock, Awe and the Exploitation of Sexual Liberation’. I’m not sure how to respond to this in terms of ‘Breaking Boundaries’ but this 1970s cycle of sukeban films certainly makes for a rich case study in representation and genre. Films like Terrifying Girls High School: Lynch Law Classroom (1973) from Toei offer good examples of how a new social type emerged in manga and Japanese pink films in the early 1970s. These were ‘boss girls’ or ‘delinquent schoolgirls’ portrayed by genre stars such as Ike Reiko and Sugimoto Miki. As far as I can see this involved the young women in ‘erotic violence’ (fighting bare-chested as in the poster) and generally triumphing over middle-aged men in positions of authority. It’s not hard to work out the radical possibilities of such types in challenging dominant representations. Japanese exhibition practice apparently saw these films paired on a double bill with yakuza films, which raises the question of how they were read by male audiences. Kozma also raised another enquiry re the issue of antagonism in Japan towards bi-racial young women and the legacy of the occupation. I think that she suggested that Ike was a bi-racial star. Several of these films are available on Region 1 discs including Lynch Law Classroom.

Linked to the popularity of exploitation genres like sukeban films is the whole topic of file-sharing and fan communities. Virginia Crisp’s paper suggested ways of approaching the distribution and reception of East Asian films via file-sharing. There were some interesting ideas here around questions of the ethics of the community, the amount of work (and money) that fans spend on creating the best versions of films to share etc. Crisp rehearsed the arguments about piracy v. the ‘sampling’ effect of sharing that actually boosts consumption in the long run. I’m not sure that file-sharing is more or less of an issue re East Asian Cinemas, but this is clearly an issue that deserves to be explored more widely. I must apologise to the authors of the other two papers, Christina Zimmerman (‘The light humour of Ogigami Naoko’) and Aimee Richmond (‘Reception as a starting point in the production of contemporary Japanese Horror’). My notes aren’t adequate to do them justice and towards the end of the afternoon everything was getting more compressed. Let me just mention the festival programmers’ panel which comprised Jasper Sharp again (whose Zipangu Fest is later this month in London), Tom Vincent from the Bradford International Film Festival and Tony Rayns who programmes East Asian films for both London and Vancouver.

There are well over 400 Japanese films on domestic release each year, but only a small fraction of these reach the UK. Tom Vincent explained that he programmes over the whole year at the National Media Museum and then has the possibility of bringing a few films in for BIFF. Jasper Sharp and Tony Rayns are more focused and have the opportunity to see a wide range of films in Japan. Their interest appears to be primarily in jishu eiga or ‘independent cinema’ and this was what brought discussion back to filmmakers such as Kawase Naomi and Kurosawa Kiyoshi – who both once made small independent films but now have films which win prizes at festivals. Rayns and Sharp seemed very down on Kawase in particular. Her films have been acclaimed at festivals, but none have ever got into UK distribution. Rayns told us that the Cannes prizewinner, Mogari no mori (The Mourning Forest, 2007), had been shown in London – against his advice. Sharp and Rayns both thought that it wasn’t a film that they wanted to show. I haven’t seen it, so I can’t comment but the important point is that Sharp and Rayns are in effect ‘gatekeepers’ for Japanese films coming into the UK. If they don’t support a film (Jasper Sharp runs the Midnight Eye website as another of his activities) there is much less chance that a UK distributor will take it on. This is more a comment on the distribution structures in the UK than the taste of two programmer-critics, but it is an issue. We did then start an interesting discussion about cultural policies in Japan and South Korea and questioned how it was that a wider range of South Korean films seemed to get into some form of UK distribution (Korean production levels are lower at around 130 per year) but this had to be cut short as the screening beckoned (see next posting).

Overall this was an eventful, entertaining and informative day. I certainly learned a lot and I’m grateful to all the organisers and funders. More similar events please!