I really enjoyed Slumdog Millionaire which was all I hoped it might be. I’m not going to write a review because there are already so many out there, it would be pointless to repeat the same comments. I’m more interested in the hype that preceded the film’s release in the UK and the storm of comment that has followed the film’s box-office and awards ceremony success. The UK media have been referring to the Golden Globes wins for the film all week and the Guardian, in particular, has found a new angle for a feature virtually every day (today’s being a feature on Vikas Swarup, the author of the original novel). But the controversy that has really got the bloggers into a spin was the statement by Amitabh Bachchan on his own blog. I was sucked into the argument by quotes and references on other sites, all of which suggested that the ‘Big B’ had criticised the film. This was followed up by a Guardian Film Blog by the ‘bad boy’ of young British-Asian writers, Nirpal Dhaliwal, who gleefully tore into Bachchan with the Guardian web subs presenting a Boyle v. Bachchan face-off. When I last looked, there were over 200 comments on the blog. 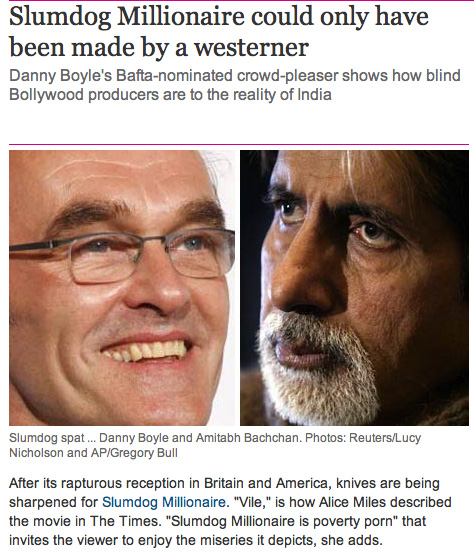 If you go back to the Big B’s blog (which other major stars publish anything like this?), it’s clear that he isn’t criticising the film as such, but instead making several cogent comments about how the film has been received in the West and in the Indian Press (it hasn’t yet officially opened in India) – and why some Indians have taken against the film. Of course, this isn’t as interesting a story as “The Big B slams Slumdog“. Maybe not, but for me this whole controversy is potentially like the first boulder breaking away from the dam – eventually the whole thing will burst and there will be much more understanding about Indian Cinema, both inside and outside the country.

It’s worthwhile reading through Dhaliwal’s entertaining but ill-informed rant and then through the comments, many of which are very well-informed and show what a sophisticated audience exists for a diverse range of Indian films that unfortunately are not well distributed in India or internationally. So, instead of a review of Slumdog, I’m offering here a collation of some of the ideas about how Slumdog works as a film narrative and how it engages with other Indian films. (I don’t claim these as original comments, but as selected from the current discussion.)

1970s/80s Bollywood: The general story ideas in Slumdog are not dissimilar to those in a host of Bollywood films, including many starring Amitabh Bachchan. I can’t remember the titles, but the idea of two brothers growing up in the slums, one of whom will become a gangster and one a police officer/novelist/entertainer etc. is a conventional Bollywood (and Hollywood) narrative idea.

Contemporary Bollywood: I haven’t seen many recent Bollywood films, but the camerawork and lighting from Ram Gopal Varma’s Company (2002) struck me immediately on watching Slumdog with its tilted frames in many scenes. Wikipedia has a useful little summary of Varma’s work, including a reference to Danny Boyle’s own statement about how he took ideas for the depiction of Mumbai’s underworld from Varma’s films. Varma’s work also involves Amitabh Bachchan and A R Rahman. This leads into another link since Rahman has been responsible for the scores of many Mani Ratnam films.

Mani Ratnam and Tamil Cinema: It seems inconceivable to me that in his Indian Cinema research, Danny Boyle would not have dug out (or been told about) the films of Mani Ratnam, who for me is the popular Indian Cinema director most likely to interest Western cinephiles. The communal riot scenes in Slumdog evoke the similar scenes in Mani Ratnam’s Bombay (1994), a commercially successful film in Tamil and then a controversial, but influential, film dubbed into Telugu and Hindi.

Music influences: A R Rahman scored Bombay and I wondered how he and Boyle worked together on Slumdog? He answers that question in a Screen International interview (16/1/2009). Perhaps not surprisingly, he didn’t get involved until a rough cut was ready. So, he didn’t in any way influence the shooting style, but he does say that he thinks that Slumdog “has a heart and soul that is very Indian”. Music and sound design are important elements of any film and are too often ignored. A R Rahman won his Golden Globe and I hope he gets the Oscar too. It’s interesting that Danny Boyle’s Trainspotting was successful in the UK for its music soundtrack as much as anything else. Indian commentators are already suggesting that sales of the Slumdog soundtrack will help drive audiences into the cinemas across India.

Mira Nair and Salaam Bombay: If I didn’t know that Slumdog was based on a novel, I would have been tempted into thinking that Simon Beaufoy and Danny Boyle had just lifted ideas wholesale from this wonderful film and then re-worked them in the style of Boyle’s UK films and the Indian films discussed above. Salaam Bombay! (UK/India/France 1988) was Mira Nair in her original documentary mode moving into fiction features with a story about slum children in Bombay who do various jobs to survive. A sub-plot includes an attempt by one of the boys to rescue a young girl trafficked into a brothel (which means going against the local criminal boss).  All these ideas turn up in Slumdog.

So, Slumdog‘s originality is not in its narrative material, but in the way that it is put together – by combining ideas from different types of Indian films, from Hindi Cinema past and present, from ‘regional’ cinema (I hate that term!) and from the diaspora cinema of Mira Nair with its European/North American shooting styles (Film Four was a producer on both Salaam and Slumdog). I don’t think anyone’s done that before. Gurinder Chadha made Bride and Prejudice (UK/US 2004), which I haven’t seen, but as far as I can tell it only used contemporary Bollywood ideas – am I wrong? Slumdog appears to me to be a genuine fusion film with elements from different Indian Cinema blended with British/Hollywood aesthetics.

The proof will come with the Indian release on January 23. As I understand it, the English/Hindi soundtrack will be on prints for major urban areas, but there will be a Hindi dub for smaller towns. The Hollywood studio Fox is involved in the distribution and I hope they make Telugu and Tamil dubs as well. Much as I think Dev Patel does a good job as the lead character, he is definitely very English! One final point, Slumdog also makes excellent use of the new ideas for ‘subtitles’ – except now they are not necessarily ‘sub’ and pop up all over the screen – wherever they make more sense in the overall composition of the image.