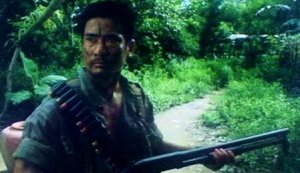 Another trip to the DVD bargain bin to pick up this early John Woo film, re-released in the UK in 2006 by Hong Kong Legends in a fine new digital transfer. Unfortunately it’s not a great film, but it does provide the opportunity to see Woo developing his style and mixing the ingredients familiar from later films.

This is just one year (possibly two or three) before Woo hit the big time with A Better Tomorrow. That film has Leslie Cheung and Chow Yun-fat but Heroes Shed No Tears has to make do with Eddy Ko and Lam Ching-ying. Fine though they are in the action sequences, they can’t do much for the ’emotion’ that Woo is so proud of. This production is reminiscent of Roger Corman films with its relentless violence interrupted at various moments by gratuitous sex scenes (only one really, but there are other scenes featuring young women ‘in action’). It also reminded me of Indian genre pictures with plenty of slapstick comedy. The word on various Hong Kong Cinema websites is that the film was shelved because the distributors thought it far too violent and only released once Woo had become successful.

The film was shot in Thailand and the plot sees a group of Chinese mercenaries hired by the Thai government to capture a drug lord operating in the ‘Golden triangle’ on the borders of Thailand, Laos and Burma. The plot requires the action to cross over into Vietnam, so the geography is distorted a little. The Chinese are led by an ex-soldier from the Vietnam War who takes on the role in exchange for the promise of ‘Green Cards’ so he and his family can enter America. This means that on the raid into the drug lord’s territory, he has his brother’s wife and small son in tow. Once the drug lord is captured, the group attempt to escape but are pursued by the drug lord’s mercenaries plus a Vietnamese border patrol led by a deranged officer and a group of tribal peoples who are forced to fight. The ‘heroes’ pick up first a French female tourist and then an American Vietnam vet and his bevy of beautiful women. From this description it is apparent that this isn’t Rambo. However, it is easily as violent as Rambo and overall Woo handles the action scenes well even if the script is weak. For me, there are strong echoes of Peckinpah-style westerns – the Vietnamese soldiers are dressed much like the Mexicans in The Wild Bunch and the tribals are dressed like Apache (I have no idea whether these costumes are meant to be authentic). There are some interesting moments of father-son style bonding, echoing scenes in later John Woo films, but I watched parts of the film on fast-forward.

The DVD includes an interview with John Woo and trailers for what look like more entertaining later films such as The Killer, Once a Thief and Bullet in the Head – which feature better casts and, unlike Heroes Shed No Tears, are not written by John Woo.