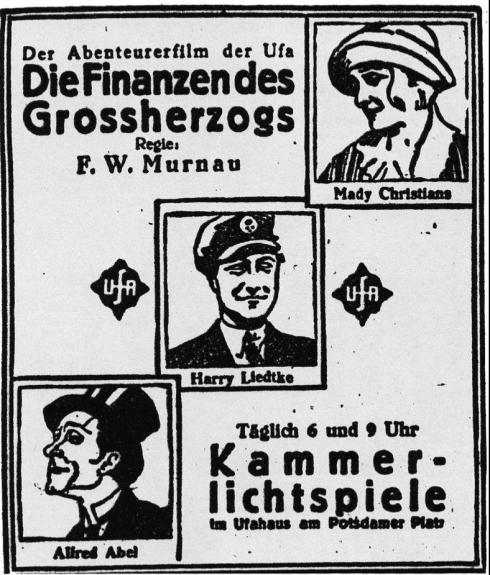 F. W. Murnau was one of the most important filmmakers of the 20th century. His career was cut short by his death at the age of 42 in a motoring accident just days before the première of his 21st feature, Tabu (1931). Eight of his early features are feared lost completely and some of the later films had not been widely distributed in the UK and US for many years before restorations in the early 2000s. Because of this, Murnau’s reputation has come to rest on perhaps as few as four of his films, Nosferatu (Germany 1922) and Der letzte Mann (Germany 1924) and two of his later American films, Sunrise – A Song of Two Humans (US 1927) and City Girl (US 1930). These are undoubtedly some of the finest films of the ‘silent era’, but are they completely representative of Murnau as a director and do the other surviving films tell us different things about Murnau’s work? I’ve been looking at five of these other films in their restored form on a Blu-ray package from Eureka in the Masters of Cinema series, the box set, Early Murnau (2016).

The Grand Duke’s Finances came at a crucial moment for Murnau who had followed the producer Erich Pommer from Decla-Bioscop to Ufa when the companies were merged. He could look forward to bigger budgets worthy of ‘super productions’ at Ufa, starting with his next film Der Letzte Mann. But he certainly seems to have had much more scope for exploration of his ideas with this film and was also able to draw on the best talents in every creative department. Perhaps most interesting though for us is the chance to see a full-blown Murnau comic adventure drama.

The Grand Duke of the title is an affable and laid-back character played by Harry Liedtke, a leading actor of the period. He is the ruler of a tiny island in the Adriatic Sea – though neither time nor place is stipulated. It seems however to have been filmed on the Dalmatian Coast with Split the one location I recognised. At this time, the area would have been part of the Republic of Yugoslavia. The Duchy is effectively bankrupt and the film’s narrative conjures up a series of schemes by outsiders which could either depose the Grand Duke or support him. The Duchy is in debt to a money-lender (a possible anti-semitic theme that is not openly articulated?). The man’s name is ‘Markowitz’. He threatens to call in the loan in the next three days. But meanwhile an aircraft flies over, dropping a note to say that Crown Princess Olga of Russia is interested in marriage to the Duke and she has the money to buy out the Duke’s debt. Fine so far, but a devious developer has found sulphur deposits on the island he wishes to exploit and he hatches a plan with four ruffians to seize the island and depose the Duke. Finally an adventurer, who seems a chivalric chancer, inadvertently becomes involved in a scheme which impacts on the Duchy’s finances (its securities are traded on the German stock exchange) and which, by chance, involves Princess Olga. The film is a comedy and it has a happy ending. But is this ‘Ruritanian adventure’ worth watching?

The plot is actually a delightful interweaving of different mini-narratives and it does make sense at some point. It was written by Thea von Harbou, a leading scriptwriter in her own right and one time wife of Fritz Lang. The performances are generally very good – none more so than that of Alfred Abel who plays ‘Phillipp Collins’ who, as the name suggests, is a kind of English gentleman crook, a version of Raffles and someone who might be played by George Sanders in the 1940s or Roger Moore in the 1960s. But really the film scores most highly on its visual style. There is a lot of location shooting here in Croatia plus car rides through city streets, a railway station scene and a couple of short maritime journeys (one involving a Russian naval ship). Murnau’s use of location shooting and his detailed appreciation of art history, which feeds into the mise en scène, means that he stands out from most of the other leading German directors of the period. Murnau was only partially an Expressionist director and Lotte Eisner makes the point that this film emphasises Murnau’s realist approach compared to a director like Fritz Lang who would have built enormous sets in the Babelsberg studio to show the island and the various journeys.

The film is based on a novel by the Swedish writer Frank Heller and it was remade in the sound era in Germany in 1933 with Madeira as a location. The remake added music and dancing. It occurs to me that stories set in ‘exotic’ sunny climes have always been popular in German cinema and Douglas Sirk made La Habanera in 1937 with Zarah Leander, set in Puerto Rico but shot in Tenerife. Heller appears to have been an interesting character, who began to write after losing money in Monte Carlo. He was interested in English culture and the character ‘Philip Collin’ (or similar spellings) appears in most of his successful stories.

The Grand Duke’s Finances is a comedy of mistaken identities and the narrative must move quickly without losing the various threads (the film is only around 80 mins long but the camerawork and editing make it feel like a ‘bigger’ production). As well as Pommer as producer and von Harbou as writer, Murnau was also able to draw on the talents of Karl Freund and Franz Planer as joint cinematographers – both valued in Germany and later celebrated in Hollywood. Edward G. Ulmer also appears in a couple of crew roles and he too would have a Hollywood career, most notably for Detour (1945) a classic film noir. Mady Christians who plays Princess Olga also later moved to Hollywood, appearing as the mother of Joan Fontaine in Letter From an Unknown Woman (1948), directed by another German emigré, Max Ophüls. The ‘four ruffians’ – comic villains – include Max Schreck, here in a bushy beard I think. I approached the film with caution but I actually found myself enjoying it and I also remembered enjoying similar films from the early 1930s, some of which included Jessie Mathews in British films, at least one of which was a remake of a German film. Just because these kinds of films are not profound, we shouldn’t fail to recognise the skills and artistry involved in their making.  I thought the Blu-ray restoration was very good.