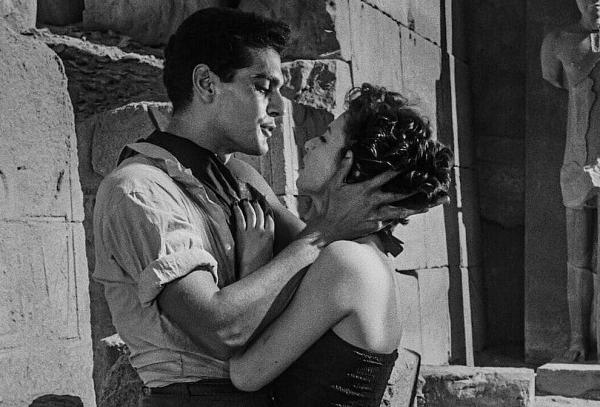 The opening shot of this film, the début film for Omar Sharif (as Omar el Cherif) and an international breakthrough for its director Youssef Chahine, is audacious. It offers us an early morning scene of fellaheen (peasants )from a Nile valley village walking along the river bank as they are mirrored in the water below. It is at once neo-realist and recognisable from the early films of Satyajit Ray (a few years later) and Bimal Roy in Bengal but it also presents an almost abstract image of figures moving in snaking dark lines against a lighter background, reminiscent of a Busby Berkeley musical sequence. Soon a voiceover begins to tell us the back-story as a montage of short, almost documentary scenes shows the villagers at work. Ahmed, a young man from the village who has been at the Institute of Agriculture has returned to the village to help improve the output of the sugar-cane fields. He is now waiting with the villagers to hear if the new crop will be bought by a major sugar company. In previous years, the villagers have lost out to the pasha, the local wealthy landlord (Zaky Rostom) whose own crop has always commanded the best price from the company. The image track begins to show individual villagers and especially the stunningly beautiful young Ahmed (Omar Sharif, then 22). He is posed first in a low-angle close-up of his profile and then later the camera tracks in from a mid-shot to a medium close-up, full face. The drums sound and the image fades to black before the full score comes in to play through the title sequence, replete with massed voices and local instrumentation.

I’ve seen a number of Youssef Chahine’s later films so I had an idea of what to expect. Even so I was very impressed by this opening. However, the voiceover told the tale that I had expected might be the narrative of the whole film – how the young man from the village left for an education to return and, against tradition, persuaded his elders to adopt modern agricultural techniques and ideas. Instead, and possibly true to the impact of the opening, what we get is a great melodrama “on an epic scale” as Jeff Stafford on his Cinema Sojourns blog puts it. That’s certainly true. The actual narrative is generic and will in different ways be repeated by Chahine himself in later films. What is crucial, however is how the political subtext is explored. Let’s consider Egypt in 1951 when the story is set. Egypt had been part of the Ottoman Empire since 1517, but only nominally so after European colonial powers like the French and the British became involved in the 19th century. The European interest was mainly in the Suez Canal and the strategic importance of Egypt generally, though for convenience the British considered Egypt and Sudan together in terms of colonial policy. In 1914 the links to the Ottoman Empire were broken and the British used Egypt as their base for attacks upon the Turks. In 1922 the British declared Egyptian independence while retaining the right to base troops in the country. A ‘constitutional monarchy’ was announced in 1923 lasting until the 1952 Revolution which eventually saw Gamal Abdul Nasser become President of the Republic of Egypt in 1956. So the struggle between the fellaheen and the pasha is both a centuries old battle and a modern one as revolution is just around the corner. The term ‘pasha’ in this context is an Ottoman hangover from when the Sultan could confer a title on anyone who was felt to deserve high status. In this narrative it describes the wealthiest man in the district who is a major landowner. Interestingly in this film we also see glimpses into the penal system and the police which display British influences.

Riad and his uncle, the pasha

The plot of the film is very simple. The news that the village’s sugar has been accepted for purchase at the higher rate coincides with the return of the pasha‘s daughter Amal (Faten Hamamah). She has been away at school/college in Cairo but as a child she played with Ahmed and now they meet again. But the pasha‘s nephew Raid (Farid Chawky), who acts as the pasha‘s manager and right-hand man, also desires the beautiful Amal. A further complicating factor is that the pasha‘s link to the villagers is through Ahmed’s father, given the honorary lesser rank of effendi who acts as his overseer. The only other significant individuals include the blind village elder who is alert and perceptive about dealings with the pasha. He has a son, Selim and a grandson Nafie who is often the go-between for Ahmed and Amal. When the pasha and his nephew decide to destroy the village sugar crop, these relationships are going to be tested to destruction in what is a classic traditional melodrama structure. 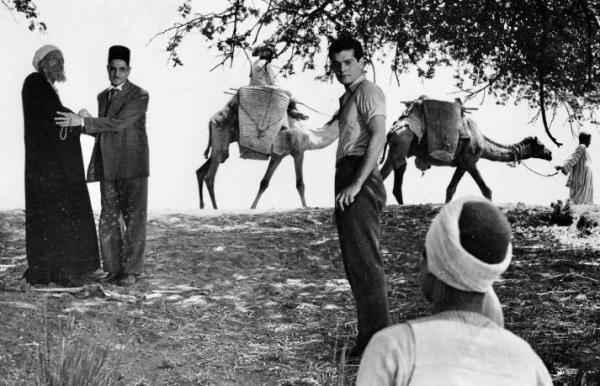 The men of the village. On the left are the village headman and Saber effendi (Abdel Waress Assar). Selim (Hamdy Gheith)  is approaching Ahmed from below

Chahine was just 28 when he made this film, his sixth feature. It is staggering that he has such command over the narrative that pace never slackens and the motions build to a thrilling climax staged among the famous antiquities of the Valley of the Kings at Luxor. This is a mainstream popular film produced within the commercial Egyptian film industry. It is written by Ali El Zorkani and Hilmi Halim and beautifully shot by Ahmed Khorshed with music by Fouad El Zahiri, both of which serve the action/romance melodrama. At one point, actually a crucial point, when Ahmed and Amal meet at a wedding in the village, I was reminded of how well Egyptian cinema in this period compares with Indian, Chinese and other Africa/Arab cinemas in its celebration of weddings as entire community celebrations. It did occur to me that there are also still European traditions that share the community celebration of marriage. It’s only the more modern West European rituals which play it down. There are some weaknesses in the climactic battle between Ahmed, Riad and Selim (after the pasha has followed a divide and rule strategy amongst the villagers), primarily in the fight sequences, but there is no doubt that Chahine (who spent a couple of years in California at the Pasadena Playhouse studying theatre, manages to bring Hollywood genre action into Egyptian cinema. Chahine was steeped in both cinema and Egyptian culture. He attended a British style prestige school, Victoria College in Alexandria whose alumni included the scholar Edward Said and the actor Michel Shalhoub (who became Omar Sharif). Chahine wanted to explore art and entertainment cinema. In the early 1950s he was also concerned to explore the story of the fellaheen struggling in the modernising Egypt to wrest control from the rich and powerful.

The Blazing Sun looks very good in a restoration print by the Cinémathèque Française and Chahine’s own company Misr International Films as leaders of a consortium. It was the second of Chahine’s films to screen in competition at Cannes. The film is available for the next six days on MUBI in the UK, so if you get the chance to see it, take it now. I believe it may also be available on Netflix? There are several more Chahine titles also leaving MUBI in six days so I’ll be trying to catch them.