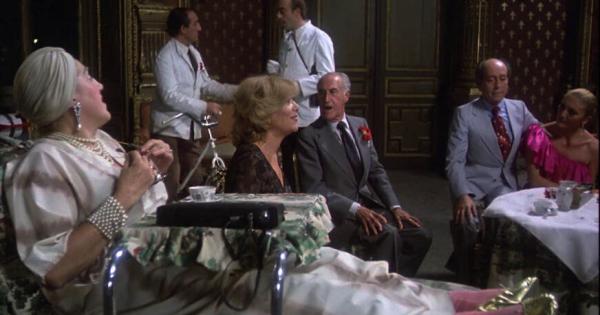 The marqués is in the centre with his wife Eugenia on the wheelchair with the food tray.

One of the pleasures of ¡Viva! over the years has been the inclusion of archive prints which give UK festival audiences the chance to see significant Spanish titles and learn something of the history of Spanish cinema. This year’s offering was two films by Luis García Berlanga (1921-2010) whose career as a writer and director began in the late 1940s and ended with a short film in 2002. Berlanga was known for a series of comedies, at first together with Juan Antonio Bardem and later with the writer Rafael Azcona. Two of his films, Esa pareja feliz (The Happy Couple, 1953) and El verdugo (The Executioner, 1963) are discussed on this blog. The comedies take various approaches from satire through to comedy dramas. Patrimonio nacional is the second film in a trilogy of farces that Berlanga directed, starting with La escopeta nacional in 1978 and finishing with a sequel to Patrimonio nacional, titled Nacional III in 1982. Franco died in 1975 and Berlanga was one of the first directors to to create a commentary on the post-Franco period. Previously, his films had been constructed to appear as comedies about ‘ordinary people’ that might evade Francoist censorship. Now he focused on the aristocracy and how they might fare in newly democratic Spain.

The three films focus on the family of the ‘Marqués de Leguineche’ (Luis Escobar). The marqués has spent the Franco years in exile from the court on his farm 50 miles outside Madrid. Now he wishes to return with the re-establishment of the monarchy in the form of Juan Carlos during the ‘Period of Transition’. The marqués is faced with several problems. His wife Eugenia (Mary Santpere) has remained in the Madrid mansion throughout the Franco period with her faithful manservant Goyo (José Ruiz Lifante). She has allowed most of the great house to deteriorate and is not happy to see her returning husband. He is saddled with a useless son Segundo and his warring wife Chus. The fate of the Spanish aristocracy in the late 1970s was not dissimilar to that of the British aristos ten or twenty years earlier – there is no money to refurbish the house and no interest, or sympathy, from the general population which is attracted by the possibilities of capitalist expansion and consumerism as Spain opens up to the world. 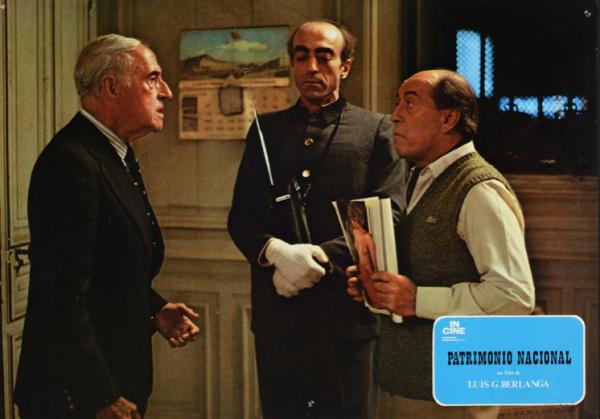 The marqués and his son Segundo (with a soft-porn magazine). Goyo the servant (with the walkie-talkie for his mistress) is between them.

Besides the money needed to restore the great house, it transpires that neither the marqués or his wife have paid any taxes since 1931, when the Republic was first declared – obviously they wouldn’t pay to support the republic and they attempt excuses for the Francoists as well. The marqués is an old rogue and a wily operator who sets out to ‘incapacitate’ his wife – i.e. to have her declared insane. With her out of the way he can perhaps restore the house, while placating the Inland Revenue. He wants to be re-instated at court, but perhaps isn’t quite as obsessed with his status as his son. In everything he tries, however, the marqués is dragged back by his useless son who is a sex pest, mainly interested in trying to acquire his own aristocratic title which might improve his chances with young women. This is something of a scatter-gun approach to satire so we also get a comic priest and a succession of lawyers all with the same family name. Servants are also a target, typified by Goyo. The marqués also has a nephew, a rather glamorous playboy with a beautiful young wife. This nephew appears to be helpful but is also conniving to get the best outcome for himself from whatever the marqués salvages from the potential sale of the house and its treasures. Finally there are the bankers and politicians, who the marqués is informed have replaced the aristocracy in democratic Spain.

Berlanga stages the antics of the marqués and his entourage in long takes on a series of sets with multiple characters. The great house is actually Palacio de Linares in Madrid (according to IMDb). The cinematography by Carlos Suárez who was a regular collaborator with Berlanga at this time is impressive, as is the art design by Roman Arango and Pin Miralos.

I confess that for me this style of comedy has not aged well, especially in comparison with the work of Luis Buñuel, admittedly from the 1970s and mainly before Franco’s death. But it also looks laboured and lacking an edge compared to the early work of Pedro Almodóvar during 1980-1983. Perhaps the comedy just doesn’t travel or is it simply that I can’t identify with aristocratic families in any way? The film seems to have been popular in Spain. The second Berlanga film in the festival was La vaquilla (The heifer, Spain 1985), another comedy, this time set during the Civil War (a first) and focusing on hungry Republican troops who decide to steal a prize heifer from a village under Nationalist control during an annual religious festival. This also seems to have been a very popular film at the time, but I decided to give it a miss and focus on a contemporary film for my last screening. I didn’t really enjoy Patrimonio nacional but I’m grateful to have had the opportunity to see it and to broaden my knowledge of Spanish cinema. The two archive prints were screened with thanks to the Instituto Cervantes.