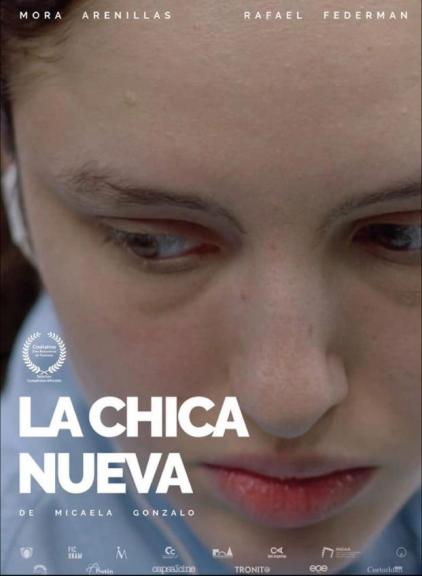 Début features form a significant part of ¡Viva! 28 and La chica nueva is the first feature of Micaela Gonzalo who also co-wrote the film with Lucía Tebaldi. This is a young woman’s story which didn’t quite take the direction I expected. We first meet Jimena living on the streets, or more accurately sleeping in hairdressing salon, in a city in Northern Argentina. She will make her way by bus to the other end of the country to the city of Rio Grande on Isla Grande de Tierra del Fuego, selling some (possibly stolen?) hairdressing equipment to pay for her ticket. She has a half-brother Mariano in the city. She clearly doesn’t know him that well but he reluctantly agrees to put her up for a few days. Gradually a few details of Jimena’s background will emerge – but only a few, Jemina doesn’t talk much and is quite guarded.

The location of the story is important. Rio Grande is a city which has a special economic status, something like an enterprise zone or a ‘freeport’ in a European context. It offers tax incentives and has become a manufacturing centre, especially for electronics goods, attracting investment from multinationals looking for cheap labour to assemble goods. This has allowed Argentina to replace imports of phones, laptops and tablets etc. But it also creates a kind of rampant ‘wild west’ form of capitalism in a region far from Buenos Aires with a colonial history of exploitation. There is no other significant source of employment and this means a modern ‘precarity’ for workers not unlike the 19th century conditions found in ‘company towns’. Mariano has a job at an electronics factory and Jemina will also find work there.

The festival brochure lists this film as part of its International Women’s Day celebrations and it is clearly a female-focused narrative. Jimena develops a relationship with Martina, one of her co-workers who was once linked to Mariano and she becomes part of a close group of women workers. Gradually she gets to know her half-brother too, but this will have its problems, partly linked to industrial relations in the factory and his desire to make money any way he can. Jimena is not lacking ambition either but how far will she go to make money quickly?

It is an intriguing film. Micaela Gonzalo attempts both a form of ‘coming-of-age’ story and a narrative about precarity and industrial relations. It occurs to me that I’ve seen similar stories set in Iceland, the Faroes, Northern Norway or Scotland – where the work is often in a fish processing plant. (See, for instance Run (UK 2019) set in a Scottish fishing port in which the husband works in a fish-processing plant and his wife is a hairdresser.) In some ways La chica nueva could be a Ken Loach or Dardennes Brothers film. It is quite short for a feature (roughly 75 minutes) but the director manages to present its parallel narratives despite the fact that we learn so little about the central characters. This is achieved by restricting conversations and relying on strong performances by the leads with Mora Arenillas as Jimena, Rafael Federman as Mariano and Jimena Anganuzzi (the most experienced cast member) as Martina. The shooting style moves slightly away from the social realism that might be expected, often giving us close-ups of the performers’ faces to ‘read’ instead of explication through dialogue. It’s Argentina and I was amused to see that the women at the factory play football and a camping trip involves a meat-based barbecue. I confess that I wasn’t quite sure how the imminent football World Cup was causing ructions in the factory. I would expect that demand for flat screen TVs and smartphones would increase but instead this leads to a crisis in industrial relations in the plant. I enjoyed the film and thought the performances were good. The story had real promise and I hope Micaela Gonzalo is able to develop her undoubted skills on future projects.

La chica nueva plays again in the festival on Sunday April 3 (with an introduction by Jessie Gibbs, ¡Viva! Festival Co-ordinator) and on Thursday April 7. You can get a flavour of the film from this trailer (no English subs):