This documentary about the American rock band The Doors is streaming on MUBI as part of a selection of music dramas and documentaries. It only occurred to me later that it’s 50 years since Jim Morrison died. I find it quite difficult to gather my thoughts about the film and to write about it coherently. I enjoyed watching it but I was surprised to find many leading critics were down on the film at the time.

Watching the film for the first time now, when there have been so many TV documentaries on almost every major rock act of the 1960s/70s, several successful cinema documentaries such as the Asif Kapadia film about Amy Whitehouse plus many blockbuster biopics, prompts me to reflect on audience expectations. All films about popular musicians are likely to appeal differently to fans and to general audiences and this film is no exception. For the record, I heard plenty of The Doors music across the time of their brief career, but I never bought the singles or albums and I didn’t see them live. I wasn’t a fan as such and I read less about them than compared to many of my favourite acts. I avoided the Oliver Stone biopic but I remember TV material on the band, possibly from the 1968 Granada TV documentary. Perhaps this slight distance from the band meant that I didn’t find this film to be a hackneyed re-telling of the same old story. 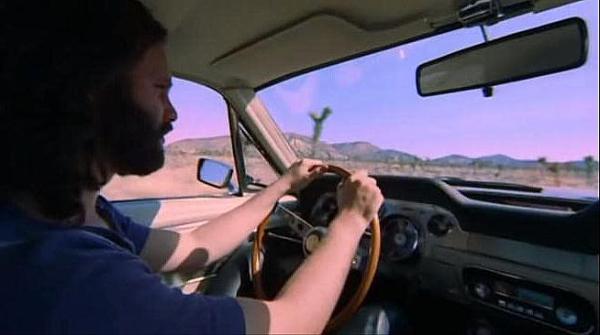 Jim Morrison in a still from HWY

It does appear that the writer-director Tom DiCillo was aiming at a more general audience. DiCillo was then a director in American Independent cinema, probably best known for Living in Oblivion (US 1995). He wrote a voice-over commentary for his carefully edited amalgam of archive clips of The Doors and crucially did not include any memories/witness statements/long interviews. This disappointed some fan critics but I found it refreshing. Originally DiCillo read the commentary himself, but after a poor response at an early festival screening, he replaced the commentary with a new reading by Johnny Depp. The USP of the 2009 film was the inclusion of many extracts from two films made by the cinematographer Paul Ferrera, a close collaborator with Jim Morrison. HWY: An American Pastoral (1969) is a 50 minute drama co-written by Morrison who also stars as a young man in the desert. Feast of Friends (1969) is a 50 minute documentary offering a sense of The Doors at work, on the road and at play during 1968. This second film was an ‘official’ Doors documentary which was cancelled at the time (when Morrison was arrested for ‘obscene behaviour on stage’) but was eventually restored and released on DVD in 2014.

I was initially confused by this footage, especially from HWY. I hadn’t read the blurb beforehand and I wondered if this was an actor impersonating Morrison. I also wondered how DiCillo found so much material from the recording studio and backstage at concerts. He certainly managed to work with his team of editors to meld this ‘new’ footage with other archive news footage and stills to produce a coherent whole – with Depp’s V.O. bridging the edits. The commentary has been criticised for not offering enough analysis and insight but I think it is well pitched for a general audience who should learn something. I certainly did. The problem is that, partly because of the HWY clips, Morrison comes to dominate more of the film narrative and therefore it is difficult to go much beyond the story about Morrison which has been told many times before. 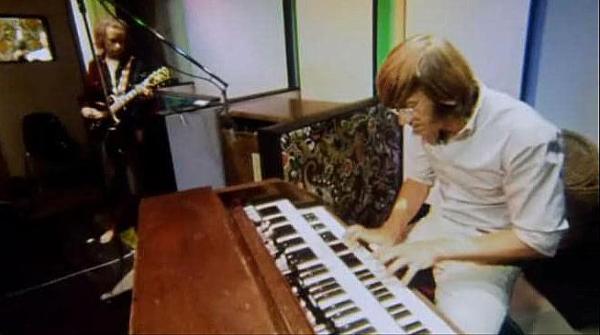 Robbie Krieger and Ray Manzarek from the studio footage

What I learned was that Morrison and Ray Manzarek, who was the keyboards player and really the leader of the band, had been together on a film course at UCLA (where they met Ferrera). I also got a much clearer picture of Manzarek and the other two Doors’ members, guitarist Robbie Krieger and drummer John Densmore. The musical backgrounds of the trio helped me to understand more about how the distinctive Doors’ sound came about. It struck me that the combination of blues, jazz and Krieger’s unique guitar-playing with its Spanish guitar feel is representative of that third blend of American rock music (i.e. jazz-blues), as potent but not as well known (to me) as the blends involving country music or soul music. I wanted more of this but it wasn’t to be. Nevertheless, if you don’t know the music or the band that well the film does introduce the strange combination of the Manzarek-led music and Morrison’s doom-laden and gothic-sounding voice and lyrics. One other revelation for me was that Morrison’s father was an admiral in charge of naval forces in the Vietnam War. There is a thesis somewhere about rock music and military families. Morrison was estranged from his family in 1968.

Unfortunately the ‘Official Trailer’ for this film on YouTube is in the wrong aspect ratio so I’ve chosen a fan video which uses some of the material from HWY to give you an idea of how that looks: