Weddings and funeral are universal settings for family events and they have been fertile ground for quarrels and revelations since storytelling developed in human communities. Shiva is the Jewish period of mourning and in this New York Jewish community Danielle (Rachel Sennott), a college student, has been asked by her parents to attend a shiva gathering for one of their friends. Danielle doesn’t know (or can’t remember) the person who died and she misses the funeral service because she is enjoying a session with her ‘sugar daddy’. This brief scene opens the film in long shot and we see Dani being paid for sex. The rest of the film is located in the middle-class home of the bereaved’s family.

For Dani the shiva is an unsettling experience which is at times nightmarish. Her parents (played by Polly Draper and Fred Malamed) comment on everything about her and discuss her possible career options, her appearance and prospective marriage partners with all the other ageing parents, friends and relatives. But the real nightmare begins when Dani spots her ex girl-friend, the successful student Maya (Molly Gordon) and soon after her ‘sugar daddy’ turns up with his high-flying wife and their baby. It appears that Max (Danny Deferrari) knows Dani’s parents but he was unaware of who Dani was. It’s not difficult to see how much of a nightmare this is for Dani. The film is relatively short at just 77 minutes but writer-director Emma Seligman packs a lot in. At first I wondered if I would be able to follow this narrative at all but it got easier when I turned the English subtitles on – I found the two young women in particular hard to follow. There are also more Yiddish terms used in the film than I’ve come across for a while. I’m clearly not the target audience for the film but I did find I was engaged and I came to understand Dani more as the film went on. I confess I would have left the shiva gathering as soon as possible to get away from all the other people there but Dani is made of stronger stuff.

Shiva Baby was released in the UK by MUBI following a successful run in North America in cinemas, at festivals and on streamers. MUBI gave the film a single day cinema release in early June and it is now streaming, presumably for some time. On the stream, the film is followed by an informative and engaging Q&A with Emma Seligman who turns out to be from a Reform Jewish Community in Toronto. She trained at NYU and originally made Shiva Baby as an 8 minute short film in 2018 with Rachel Sennott as Dani. Opening out the film required a hunt for funding from various independent sources. Shiva Baby is very impressive as a first feature. Seligman makes the most of her major location and the budget constraints. There is a strong cast supporting Sennott who is herself a comedian and writer as well as actor. The material comes from Seligman’s own observations and experience of her own Jewish community. She makes clear in the Q&A that the film is for ‘millennials’ who are faced with the lack of understanding shown by ‘boomer’ parents. I think this is a little unfair. As a boomer I’m well aware of the struggles of recent graduates in finding jobs and I’ve had a ‘portfolio’ career myself so I know something about what they might face later on. But these are not the real concerns of the narrative. Parents are much the same across many cultures – these New York Jewish parents just seem more hard-edged and extreme, although much of that is bluster, I think.

The real concern here is what Seligman refers to as ‘validation’ of identity for young women and particularly for queer young women like Dani and Maya. It’s about gaining control over your own sexuality and the power relationships that this involves. The concept of the new ‘sugar-daddy’ involves young women (and men) finding older partners online who are willing to pay for sexual relationships. Many young people need money for higher education fees on top of living accommodation and subsistence. Dani, however, has relatively wealthy parents who at the moment are providing monetary support. In a sense she is still a ‘baby’ for her parents and her use of a sugar daddy has wider and more complex meanings. The film’s title thus works both for Dani’s status and for Max’s baby which proves to be the real inciting incident of the narrative structure. “Who on earth brings a baby to a shiva?”, as someone asks rhetorically. 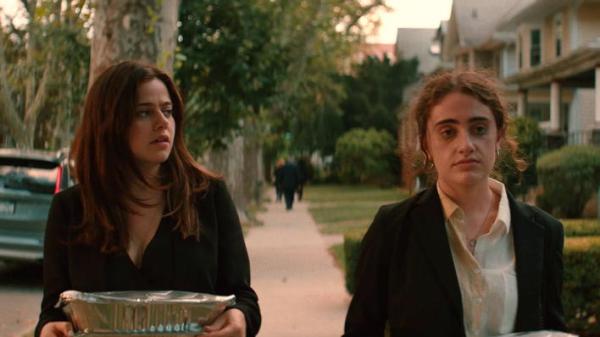 Helping out with Maya. How is meeting her again going to work out?

Several reviewers have suggested the narrative resembles a horror narrative, others have referred to farce. One suggested it resembled the scene in The Graduate when Benjamin is urged to go into plastics, the industry of the future (in 1968). There is something in all of these suggestions. Leyna Rowan and Hanna Park, as respectively cinematographer and editor, do a good job of taking us through the several rooms of this suburban house, sometimes seeing characters through windows, down corridors and in doorways in the throes of a lively gathering. The film is presented in ‘Scope and at one point we get an expressionist montage of shots of elderly people rather obscenely eating the various forms of ‘finger food’. Dani we will learn has been ‘chubby’ in the past and now is ‘skinny’. Comments about her weight just add further pressure. The music soundtrack by Ariel Marx is more likely to evoke a horror film or at least severe disturbance.

Shiva baby is a highly-rated film. I did wonder if it could live up to the hype. I needn’t have worried. The whole MUBI programme (97 minutes with the Q&A) flashed by and stirred up a lot of thoughts. I’d recommend it for any audience, not just millennials, though they might get most from it.