The winter home for the cows indoors.

My second film from the online ArteKino Festival turned out to be a technically accomplished low budget feature made as part of La Biennale di Venezia of 2019. The film production was awarded a budget of €150,000 as part of the Biennale College Cinema project. This is the first feature of Chiara Campara. It’s a short feature, listed by the Biennale at 79 minutes but running at 82 minutes in the online festival. 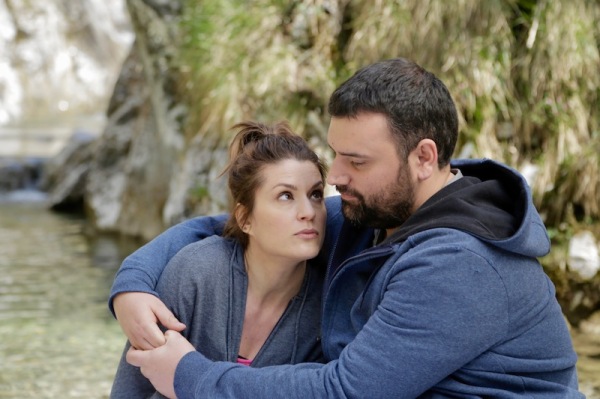 Yuri and Agata on a trip in the mountains.

I’m slightly non-plussed in my attempts to categorise the feature. Its central character is Yuri (Leonardo Lidi) an unmarried 30 year-old, the eldest of three siblings of a farmer in what I assume to be Northern Italy, perhaps in Trentino-South Tyrol. The district is not named but the farm practises a form of transhumance – cattle being taken up to higher ground for summer grazing but kept in pens under cover for winter. Also, Yuri has a small stone hut in a forest which he says was used in the Great War when Italy fought against Austria. Yuri has reached a ‘dangerous age’. He doesn’t know whether to stay on the farm or leave for the nearest large town. His main relaxation is to visit a night club which features pole dancers and private rooms and he has begun a relationship of sorts with one of the dancers, Agata (Alice Torriani). Yuri is clearly a marginalised young man. He’s tall but overweight, though he has an attractive face. He moves slowly and thinks deeply. He works methodically and is clearly skilled in what he does on the farm. He is serious about ‘courting’ Agata but is she too ‘worldly’ for him? Meanwhile his sister has what he considers an unsuitable boyfriend and is about to move out. His younger brother, still in his teens is also likely to leave. Yuri does have the option of moving to the large town and working for his uncle’s construction site team.

Yuri tries out working on a construction site . . .

I can think of several similar films in terms of characters and settings. In the UK a few years ago we had as many as three features which all developed narratives about farms in regions with what might be seen as ‘marginal’ agricultural operations. The one that sprang to mind immediately was arguably the most successful of these, God’s Own Country (UK 2017). But that film was much more dramatic featuring a conflict between the young man and his parents and the appearance of a migrant worker who turned out to be gay. Lessons of Love is much more restrained. It has a realist style and I wasn’t surprised to read that Chiara Campara had trained as a documentarist and had previously directed a  medium-length documentary feature and photographed another. There is attention to detail in all the scenes looking at agricultural practice. I’ve seen references to the film as a form of romance, but I don’t think there is enough to justify such a label and audiences may be frustrated if there was that expectation.

. . . but is he still too close to his cows to leave them for good?

I assume the film is intended primarily to be a character study of Yuri and in that respect it works pretty well but I’m not sure it is sufficient in itself to support a feature. Yuri seems mild mannered but on three occasions at least he loses his temper suggesting that there is more going on beneath the surface. The director’s statement on the Biennale website suggests that it is a “delayed coming of age” narrative – one that requires Yuri to ask a lot of questions of himself and where he wants to go with his life, both in is relationships and his working and leisure life choices. That’s fair enough. I don’t necessarily want those questions to be answered and it is probably enough that they are raised, in particular the cost, expressed in several different ways associated with leaving his life of working close to nature and both his cows and wildlife compared to moving into the exciting but stressed world of urban living. But in the end I think even a short feature of 80 minutes needs a little more drama. I think I found this a film to be admired for its performances and the cinematography of Giuseppe Maio. There is also an interesting discourse about the music Yuri plays in his car. But I think the script (by the director and Lorenzo Faggi) is a weakness. I enjoyed some of the sociological detail – I wasn’t aware of a country music culture in rural Italy – but I needed to be more engaged by the narrative. However, I was impressed by the director’s skills evident in a first feature and I will be interested in what she does next.