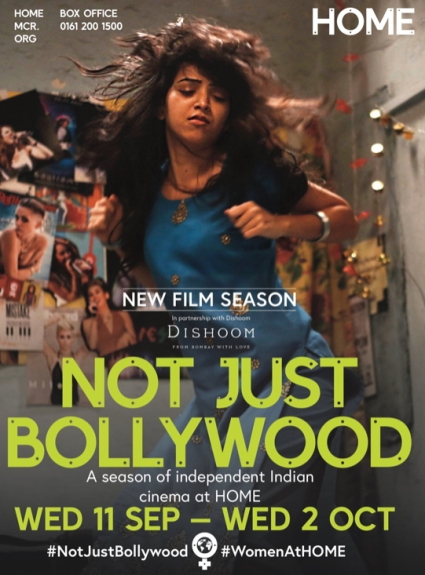 Plabita Borthakur in Lipstick Under My Burkha

The 3rd season of ‘Not Just Bollywood‘ runs from September 11th to October 2nd at HOME in Manchester. You can access the full details of the programme on the HOME website. There are eight films in all and a ‘One Hour Intro: The New Woman and Contemporary Indian Cinema’ with Dr Saba Hussain from the University of Warwick. The joint curators of the season, Dr Omar Ahmed and Head of Film at HOME Rachel Hayward will introduce the first film in Deepa Mehta’s ‘Elements’ trilogy, Fire (1996). I will be introducing the final film in the programme, Anu Menon’s Waiting (2015).

This year’s programme is directly linked to HOME’s year-long programme Celebrating Women in Global Cinema to spotlight some of the best examples of Indian independent films directed by women. There are six featured directors in the programme as well as a number of leading female actors. An important feature of the programme is the inter-connected nature of the films with the same actors appearing in different films for different directors with a sense of a collective interest in Indian independent cinema as well as a respect for fellow professionals. Tillotama Shome appears in both Sir (2018) by Rohena Gera and A Death in the Gunj (2016) by Konkona Sen Sharma. Director Sen Sharma is also one of the four women featured in Lipstick Under My Burkha (2016) by Alankrita Shrivastava. Kalki Koechlin, one of the most prominent actors of Indian independent cinema features in both A Death in the Gunj and Waiting. There are other double appearances as well and some actors will be familiar from films in the two earlier editions of ‘Not Just Bollywood’.

The first two films of Deepa Mehta‘s trilogy feature Nandita Das and in Fire she is paired with Shabana Azmi. Azmi whose career began back in 1974 with Shyam Benegal’s Ankur: The Seedling, is a representative of the first generation of actors to gain a profile through the Parallel cinema that revived Indian cinema’s interest in the ‘social’ film. Shabana Azmi a graduate of the FTII (Film and Television Institute of India) became both a star and a campaigning social activist. Her pioneering work was picked up by Nandita Das who added the director’s role to her impressive acting performances and social activism. Both women would have appeared in Deepa Mehta’s third ‘Elements’ film, Water if the shoot had not been forced to re-schedule by political and religious opposition groups. Konkona Sen Sharma also has links to the earlier Parallel period, appearing as an actor for her mother Aparna Sen, one of the foremost women in Indian cinema as both actor and director since the 1960s. The women of the ‘New Indian independent cinema’ are developing and broadening the work of earlier generations and ‘Not Just Bollywood‘ offers the perfect opportunity to discover what they have achieved.

Posts on each of the titles in the season will appear on the blog over the next few weeks.