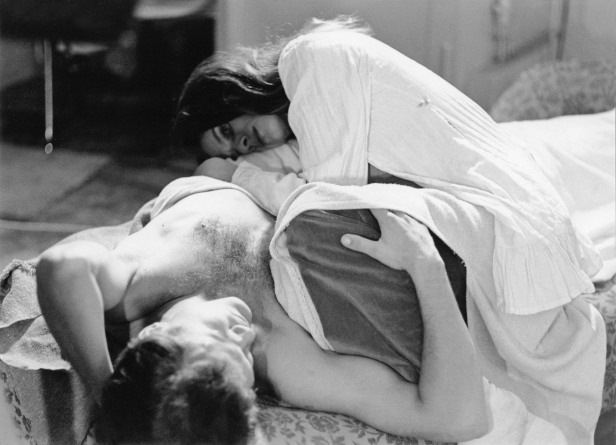 “Grischa (Grischa Huber) and Heinrich (Heinrich Giskes) are actors in West Berlin, who become a couple after spending a night together backstage.” {Retrospective Brochure).

The film opens with a rehearsal for a television production in the Greek tragedy mode. Grischa and Heinrich find themselves locked in together. They spend the night there but Grischa declines to have sex. But later she does visit Heinrich and they become a couple. Their relationship is up and down. Whilst Heinrich wants to have child together Grischa is wary of this. But becoming pregnant she is reunited with him. There are also a pair of Labrador, Babs and Ben, who accompany Heinrich nearly everywhere.

Whilst the relationship goes through its up and downs Grischa becomes active in the developing women’s movement and starts on a project about women’s lives, domestic violence and abortion. The fictional drama is intercut with black and white film and stills of actual events, the most important being a demonstration for abortion rights and against anti-abortion laws.

Both characters were involved in the 1968 protests; the title seems to be a play on a famous ’68 situationist slogan. Both suffer from a sense of frustration over the fading away of radical protest. Heinrich has opted for

a ‘revolution a deux’ in love

The latter seems a slight misnomer. ‘Marx’s second contradiction’ originally was a revisionist position which aimed to take up questions of ecology. However, in doing so it lost the central concepts that analyse capitalism’s inherent recurring crisis. This crosses over with some of the analysis found in the economic writings of Rosa Luxemburg, but I did not note any reference to her in the film. Some women theorists have appropriated the term ‘second contradiction’ and applied it to contradictions about gender. 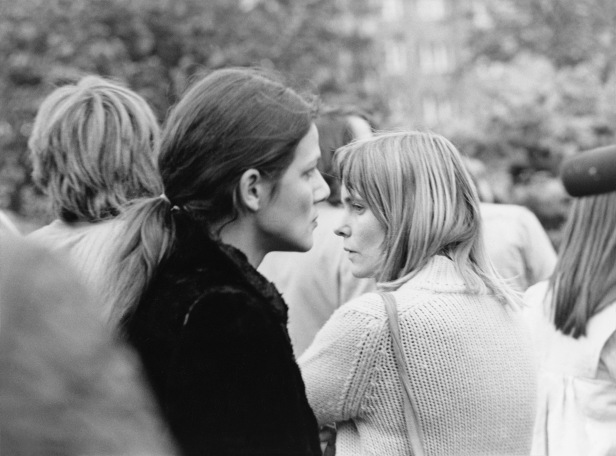 The writer and director Helma Sanders-Brahms became a key figure both in the New German Cinema and in feminist film-making in Germany, though not all critics rated her work. This title, along with Germany, Pale Mother / Deutschland bleiche Mutter (1980), is probably her most influential film. The film uses extensive location filming and a degree of improvisation. The black and white cinematography by Thomas Mauch is well done. And Elfi Tillack edits the different footage and sequences so that the film maintains momentum. As a dog fan I noted that there is one setting where the Labradors are missing, but apparently this was because it was an actual cramped bedsit and this had no plot significance. The original film had been transferred to a DCP and looked and sounded fine. I watched at the Zeughauskino, a small auditorium at the Deutsches Historisches Museum, that I really enjoy visiting.