This title was a Berlinale Press Screening held in the Berlinale Palast; outside the Festival the Theater am Potsdamer Platz. This is has a vast auditorium seating 1600 people with two balconies. It is a sign of the size of the media coverage of the Berlinale that on a Saturday morning the auditorium looked more than half-full. There is a large screen, 17 by 8 metres and good quality 4K digital projection and Atmos sound.

This title was one in the Festival Competition. It was written and directed by Marie Kreutzer. She has had made some short film, television titles and two previous cinema features; neither seems to have received a British release.

This film shares some plot features with the earlier Toni Erdmann (2016). Fortunately for me, it played the comparable story not for idiosyncratic humour but full-blooded drama. Lola (Valerie Pachner) is a driven and rising star in a multi-national business consultancy. Several times in the film she flies off from her spare, clinical home apartment in Vienna to the latest site where the company is selling ‘downsizing’ to a troubled firm. In this case the site is Rostock, though we do not encounter any of the contemporary Russian robber-barons.

Lola is in charge of a new and nearly completed project. Her career is helped by her relationship with senior manager Elise (Mavie Hörbiger). But this advantage unravels because of the her family complications. Officially an orphan she has an elder sister Conny (Pia Hierzegger). Conny suffers from paranoid schizophrenia.

Lola finds that she cannot manage/help her sister in the disciplined manner in which she works. As she struggles to balance one life against another we also discover some of the troubled background of the sisters. This includes the reason why at work Lola passes for an ‘orphan’; emotionally this is partly true.

The study of the Machiavellian environment in which she works is well done. Her colleagues run the gamut from the ruthless career climbers to the naïve juniors. It is easy to see how these contrary characters will emerge as the contract reaches agreement. 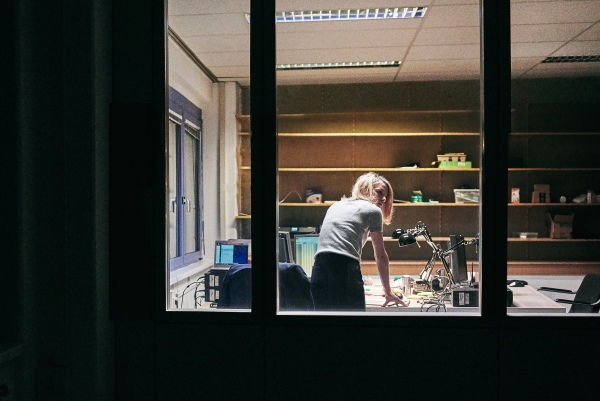 If the workplace is somewhat conventional the hospital and mental institution which shelters Conny is more interesting and complex. As the production narrative develops the sister’s relationship becomes the most interesting facet. But Lola has left addressing this situation squarely to a very late stage.

The leads are very good: Valerie Pachner dominates the story and the screen. The sexual relationship between the two women is overt and convincing. The plot, as I suggest, is in many ways conventional but the resolution is not just predictable but worthy of attention. The title was shot on 35mm in a scope format and colour. The screening used a digital transfer to DCP which was well done and offered a good image and sound with English sub-titles. The camerawork is well done. The use of mid-shots and close-ups in confined work spaces often suggest the claustrophobia in the company. Whilst in Vienna, and outside the white and metallic apartment, open-air sequences enjoy excellent tracking shots which emphasize the sense of the title.

The screening at the Berlinale was organised by Picture Tree International. I did not find any titles from the company that I recognised from a British release. The home market is not that receptive to Austrian titles [or quite a few other European industries]. The production has enough drama and is a relatively mainstream offerings. We may well in due course see it in Britain.