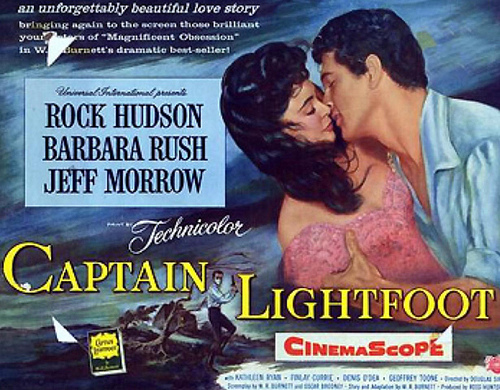 Captain Lightfoot is a Hollywood film adapted from a story by the prolific W. R. Burnett. It is mainly interesting as an example of the genre films with A list casts and budgets released by the studios at the time when they were trying to assert film’s dominance in the face of television’s rapid rise. The two important ingredients were the location of the story – a ‘runaway’ production in Ireland – and the combination of Ross Hunter as producer, Douglas Sirk as director and his protegé Rock Hudson as leading man.

The film was shot completely on location – in County Louth and in various country houses around the country. Sirk, quoted in Jon Halliday’s Sirk on Sirk (1997), remembered how much he loved Ireland and enjoyed the shoot despite some of the production difficulties. The story refers to attempts by Irish villagers to create a revolutionary ‘Society’ in 1815. Hotheaded local Michael Martin (Hudson) falls foul of the British and is hunted by dragoons before being rescued by a clergyman (Jeff Morrow) who turns out to be the notorious highwayman Captain Thunderbolt in disguise. Thunderbolt is the main funder of the rebels, stealing from the British in various ways, including the operation of an aristocratic gaming house in Dublin. Martin is soon inducted as Thunderbolt’s second in command and given the title ‘Lightfoot’. Lightfoot will cause various problems when he falls for Thunderbolt’s impetuous beautiful daughter (Barbara Rush).

Shot in Technicolor and early CinemaScope (2.55:1 with separate 4-track mag stereo) this is a vibrant and colourful action adventure with appropriate romance and historical/political elements. Sirk remembered that he and his cinematographer (Irving Glassberg) were required to work on early ‘Scope films in such a way that the film would work on both Scope and Academy ratio cinema screens. At this time many cinemas were still in the process of converting to widescreen – the same requirement would be made in the 1970s when most films expected to find their audience on 4:3 TV sets. Sirk also had to contend with Irish rain for many outdoor shots but he discovered an appropriate lens and he and Glassberg produced very fine outdoor action sequences. He also discovered that Rock Hudson was equipped for screen comedy to go with his dashing good looks and boyish charm.

The film offers good light entertainment and enjoyable performances. Films that see Irish resistance to British colonialism always went down well in parts of North America and I was amused to see a fist fight reminiscent of John Ford’s The Quiet Man made in the West of Ireland a few years earlier. Overall, however, I was most impressed with the confident staging and direction of actors from Douglas Sirk who was by 1955 established at Universal with Hunter’s backing and access to stars. Hudson’s performance here comes between two of his performances in Sirk’s melodramas – Magnificent Obsession (1954) and All That Heaven Allows (1955). The relationship between Morrow and Hudson was taken as the basis for the Michael Cimino film Thunderbolt and Lightfoot (US 1974) with Clint Eastwood and Jeff Bridges.